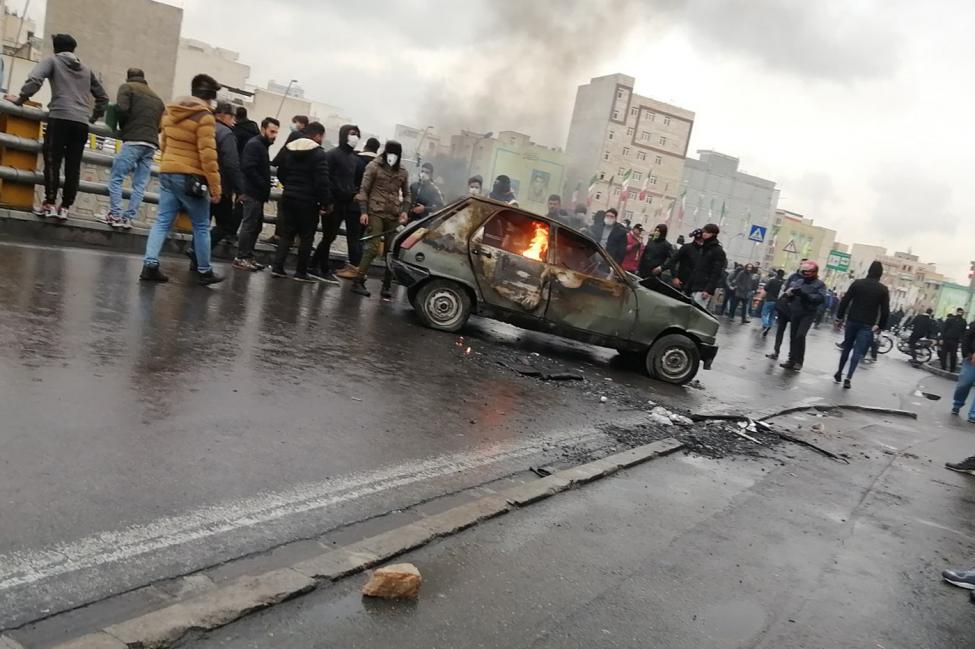 Nov. 26 (UPI) — The international community must take decisive action to limit the further loss of life in Iran. Since protests last began on Nov. 15, at least 300 activists have been killed. Thousands of others have been wounded and thousands arrested. Regime authorities have explicitly warned that anyone deemed to be leading their local demonstrations could face the death penalty.

If the recent killings do not demonstrate the seriousness of this threat, then the long history of repression in the Islamic Republic certainly does. Iran consistently maintains the world’s highest rate of executions per capita. The regime’s commitment to opacity in judicial proceedings makes it difficult to know how many of these executions stem from political charges, but information on this topic does leak to the public from time to time.

What is well-known is that in a matter of only several months in 1988, Iranian officials hanged a staggering 30,000 political prisoners in an effort to stamp out dissent at a time of particular vulnerability for the theocratic dictatorship. This is relevant to the current outpouring of repression for multiple reasons. In the first place, it highlights what the regime is capable of when it finds itself under serious threat from domestic activists. And perhaps more importantly, it demonstrates that the regime’s motives for the present crackdown are the same as those that led to the 1988 massacre.

That is to say, the threat to the mullahs’ hold on power is coming from the same source today as it did 31 years earlier. The overwhelming majority of the victims in 1988 were members or supporters of the People’s Mujahedin Organization of Iran. Despite the regime’s best efforts to stamp out that pro-democracy movement, the PMOI recovered and resumed a process of growth that has not ended.

The past several days’ protests can be characterized as a continuation of the nationwide uprising that began in the final days of 2017. After violent repression caused that movement to fracture by the end of January 2018, opposition leader Maryam Rajavi urged supporters to continue their efforts at the local level and turn subsequent months into a “year full of uprisings.” By all accounts, Iran’s activist community obliged this request, keeping pressure on the regime’s repressive institutions and bringing them to their present situation.

Despite the fact that the death toll reached triple digits in less than four days, the regime appears to be no closer to bringing the population under control that it was in the hours immediately following the announcement of painful increases to the price of oil. By all accounts, the chants of “death to the dictator” have only gotten louder, leaving little question about the Iranian people’s support for a platform of regime change.

That very platform is best expressed by Rajavi, who has laid out a 10-point plan for Iran’s future in the aftermath of a new revolution. That plan calls for free and fair elections, legal safeguards for the rights of women and minorities, and other principles that are unquestionably supported by the Iranian people — one of the youngest and most well-educated populations in the entire region.

It is no wonder that the Mujahedin-e Khalq has gained more adherents and greater organization strength during the decades since it was forced underground by harsh government repression. By the same logic, there is little doubt that the clerical regime is as desperate as ever to force that movement back underground or to annihilate it once and for all. As difficult as it is to develop a complete picture of the regime’s repression over the past four decades, the politically motivated execution of MEK members has certainly continued, contributing to a total death toll in excess of 120,000.

Tragically, no Iranian official has ever faced justice for the 1988 massacre, much less for the thousands of individual executions and assassinations. That being the case, there is little reason for the mullahs to believe that there will be serious, long-term consequences for their efforts to stamp out the MEK in the context of the current unrest. Therefore, it is imperative that Western powers and the entire international community clearly demonstrate that politically motivated killings will not be tolerated, before the death toll climbs any higher.

The MEK and its parent coalition, the National Council of Resistance of Iran, have issued statements to this effect. They have quoted Rajavi as saying, “Silence vis-à-vis crimes against humanity perpetrated in Iran every day is absolutely unacceptable.” The resistance leader also addressed United Nations Secretary General Antonio Guterres directly to request the convening of an extraordinary session of the Security Council, leading to a clear statement indicating that Iran’s leaders will be held to account for such crimes.

With 300 Iranian activists having been killed by the regime, this is unquestionably the right course of action. Western powers cannot realistically call themselves defenders of human rights if they do not take such action. Given what we know about the cause of which Iranian protesters are dying, it is not just human rights issues that are at stake. The latest Iranian uprising is arguably the best chance that the region has yet had for the establishment of genuine democracy.

Neither the United States nor Europe can afford to turn their backs on a movement that so well represents its own people while also aligning so closely with Western ideals.

R. Bruce McColm is the former executive director of Freedom House, president of the International Republican Institute, co-chairman of the Iran Policy Committee and executive director for the Institute for Democratic Strategies, a non-profit organization that’s committed to strengthening democratic processes abroad.

Iran Could Be on the Brink of Overthrowing its Authoritarian Government, and the People need U.S. Support
Comment
Iran's Democratic Destiny, Fueled by Rebellious Youth