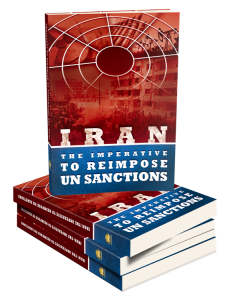 “IRAN: The Imperative to Reimpose UN Sanctions” explores the nature of the Iran regime, its methods of advancing its doctrine of expansion, and how best to respond to the threat that it poses to Iranians, the Middle East, and the international community at large.

The book begins by defining the “modus operandi of the Velayat-e Faqih system,” which lays the foundation for all actions taken by Tehran. It examines how, in that context, the regime procures and manufactures military equipment and weapons, its support for destabilizing forces in proxy battles across the region, and its use of terrorism abroad. The analysis concludes by laying out a cogent policy framework for the strategic necessity of reinstating all UN Security Council sanctions, and presents the perils of inaction for regional and global peace and security if the arms embargo due to expire mid-October is lifted.

The opening chapter discusses the Velayat-e Faqih ideology that underpins the beliefs and actions of the clerical dictatorship, and how it dictates its modus operandi (MO), i.e., to “pursue domestic suppression, export of terrorism and warmongering as core strategies to ensure its survival. The regime uses both weapons of mass destruction and conventional weaponry for suppression at home and terrorism abroad.” To support these efforts, the regime utilizes the Islamic Revolutionary Guard Corps (IRGC) or its terror arms such as the Quds Force. 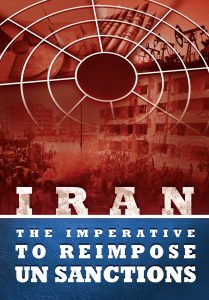 The book then looks at strategies for curbing the regime’s actions and the fallout of misguided decisions, such as lifting the arms embargo, which would only serve to further embolden the IRGC and allow the regime to strengthen areas of weakness related to military capability. Of key note is the widespread support in the US to maintain the arms embargo, as evidenced by various resolutions and calls to action that have bipartisan support in the Congress. The book takes a look at some of the specific calls and resolutions that have made their way through committees and congress, such as Senate Resolution 539 in the Foreign Relations Committee, views that are supported by the Administration’s push for a “maximum pressure” strategy.

The book next lays out the case for reinstating UN sanctions against the Iranian regime. First, a look at the history of infractions committed by the regime, followed by an examination of why there is a need for sanctions and “maximum pressure” by explaining the consistent position of the Iranian Resistance and the impact that sanctions have on the regime.

The book ends with a brief conclusion highlighting eight key points, beginning with the MO of the regime for the past 40 years, the ineffectiveness of previous Iran strategies, and ending with a call for increased action in response to the atrocities committed by Tehran.