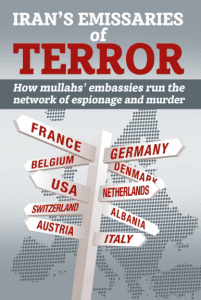 Year 2018 witnessed a marked surge in Tehran’s terror and espionage plots and operations on the Western soil, from the United States, to France and Albania.  Thankfully, these terror plots were neutralized, but they served as a wakeup call for Europe and the U.S.

The escalation of terrorist acts in 2018 targeting the People’s Mojahedin Organization of Iran (PMOI), also known as Mujahedin-e-Khalq-Iran (MEK), and the National Council of Resistance of Iran (NCRI) coalition to which it belongs, is directly linked to its role in the broad-based revolt in Iran’s streets.

This book shows that Tehran’s acts of terror are not merely the work of a few rogue elements, but indeed are directed at the highest levels of the regime, with the authorization of Supreme Leader Ali Khamenei himself.

The surge in Tehran’s terror and espionage on Western soil has intensified conversation in Western capitals on the need for pragmatic, effective and pro-active measures to counter the regime’s terrorism.

The book shows how the Islamic Revolutionary Guards Corp (IRGC) and the Ministry of Intelligence and Security (MOIS) are terror partners. It also makes the case that, as a follow up to the long-overdue designation of the IRGC as a Foreign Terrorist Organization (FTO), MOIS be similarly designated by the U.S., and blacklisted by Europe; Iran’s terrorist-diplomats be expelled; and the agents of its intelligence services be prosecuted and/or expelled from the U.S. and Europe.

The Ministry of Foreign Affairs and the Foreign Minster occupy one chapter of this book to show the full cooperation of this agency in all terror operations in Europe over the past three decades.

In 2018 alone, under Mohammad Javad Zarif’s stewardship of the Foreign Ministry, five diplomats have been expelled from three European countries, including regime’s ambassador to Albania, who was expelled in December 2019 for his role in masterminding a truck- bombing terror plot. Another senior diplomat is in a Belgian jail awaiting trial. A dozen agents, who were directed and funded by the embassies and were all involved in terror plots, are also in jail.

This book comes in seven chapters and contains dozens of pictures, graphs, and charts, as well as 164 endnote, and is a well-documented source for examining the terror apparatus of the Iranian regime.

“Iran’s Emissaries of Terror is methodical in detailing Tehran’s violent modus operandi, from the top down.  The realization that there has been one terrorist plot in the U.S. or Europe by the Iranian regime every six weeks in a span of six months in 2018 should be of great concern to law enforcement agencies in Washington and European capitals. The EU must immediately confront the Iranian regime for targeting its opponents outside its borders.”

“Iran’s Emissaries of Terror lays bare the Iranian regime’s reliance on terrorism as a dangerous tool of foreign policy. In 2018, Iran has dramatically stepped up the frequency of terrorist plots targeting dissidents in Western Europe and the United States. This book represents a comprehensive open-source account of the threat and should be required reading for anyone involved in the study of state-sponsored terrorism. Western governments should take heed and act now before it is too late.”

“Iran’s Emissaries of Terror provides great insight into how Iran’s terrorism network operates globally, who its key decision-makers are and how the regime uses the cover of its embassies and diplomats to recruit operatives and set up sleeper cells for the purpose of surveillance and intelligence-gathering operations against dissidents.  In griping detail, the book lays out the regime’s clear and cold intent of waging terrorism on Western soil.”