U.S. Representative Office of the National Council of Resistance of Iran (NCRI-US) 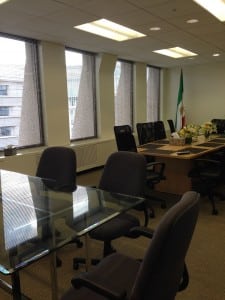 The National Council of Resistance of Iran-US representative office (NCRI-US) is registered as a non-profit entity in Washington, DC, and is classified as a 501 (c) 4 organization.

The NCRI acts as the parliament-in-exile with some 500 members (half of them women), including representatives of ethnic and religious minorities such as the Kurds, Baluchis, Armenians, Jews and Zoroastrians. Founded in 1981 in Tehran, NCRI aims to establish a democratic and non-nuclear republic in Iran, based on the separation of religion and state. Maryam Rajavi is the President-elect of the NCRI for the transitional period. Her mandate is to oversee the peaceful transfer of power to the people following the regime’s overthrow.

NCRI-US is involved in disseminating information to the U.S. Congress, the executive branch, think tanks and non-governmental organizations, media, academics, universities, and the general American public.

NCRI-US has held press conferences (including the ground breaking revelations of the nuclear sites in Natanz and Arak), provided briefings, offered speakers for panels and lecturers for colleges, provided expertise for major Television programs, authored commentaries in major print media and blogs, published books and papers, and testified before Congress.

NCRI-US has every year held an open house reception marking Nowruz, the Iranian New Year which starts on the first day of spring.

NCRI-US is also heavily present on social media and weighs in on major developments regarding Iran.

These materials are being distributed by the NCRI-US. Additional information is on file with the Department of Justice, Washington, D.C.