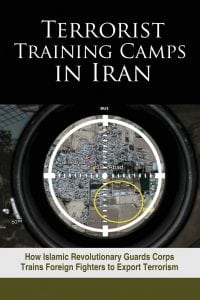 The book details how Islamic Revolutionary Guards Corps trains foreign fighters in 15 various camps in Iran to export terrorism. The IRGC has created a large directorate within its extraterritorial arm, the Quds Force, in order to expand its training of foreign mercenaries as part of the strategy to step up its meddling abroad in Syria, Iraq, Yemen, Bahrain, Afghanistan and elsewhere. This book explains the kind of training is provided in each camp, who the trainers are, where they are dispatched to, as well as satellite imagery of the locations of these camps all over the country.

An explosive new report given to the Trump administration could fuel discussions by the president’s inner circle about adding Iran’s Islamic Revolutionary Guard Corps (IRGC) to the official list of foreign terrorist organizations.

According to the report, fighters are streaming in from Afghanistan, Syria, Lebanon and Yemen, all countries where Iran has expanded interests.

“It was the activities of the Iran regime, particularly the Revolutionary Guards Corps, that paved the way for the rise of extremism and sectarian violence in Iraq and Syria. Particularly, it was the IRGC activities that led to the rise of ISIS,” said Alireza Jafarzadeh, deputy director of the council’s Washington office, who first revealed the extent of Iran’s surreptitious nuclear program a decade ago.

For the first time, the location details for one of the training camps, Imam Ali Garrison, was made public. Situated in the northeast of Tehran, the Imam Ali Garrison is located at kilometer 20 of the Tehran-Karaj Highway on Ardestani Boulevard, which is close to the end of Saravan Street, according to the NCRI.

Sanam Vakil, Ph.D an Associate Fellow at Chatham House told IBTimes UK that the PMOI report spoke to the extent of the IRGC’s training scheme…”What I take from this is that this is a very sophisticated operation,” Vakil said. “Iran’s strategic strength is in asymmetrical proxy relationships. Its conventional military is weak particularly in Iraq and Syria they have had success in the past. Of course we also know they are the God Parents of Hezbollah.”

The NCRI intelligence report is notable in that it includes specific details that until now had not been publicly available.

According to Awad Mustafa, a defense analyst based in the United Arab Emirates (UAE), “the revelations carried by this intelligence” released by the NCRI is “key” to understanding the Quds Force. In a public statement, the NCRI urged the international community to officially designate the IRGC a terror entity. This is a prudent first step.