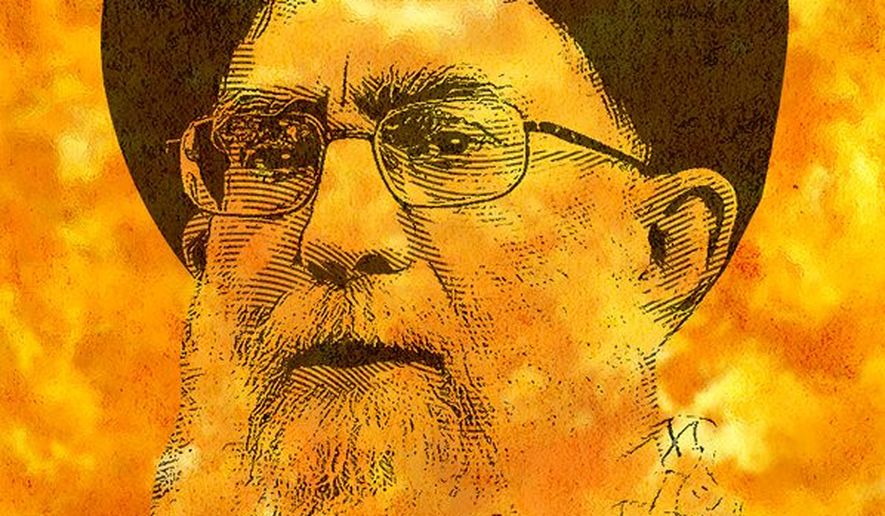 Iran’s regime is doomed, desperate and dazed. For weeks, people in Lebanon and Iraq rose up against its destructive meddling. And, for the past 11 days, people of Iran in 176 cities revolted to unseat it in Tehran itself.

So far, the murderous theocracy has slaughtered 450 protesters, wounding 4,000, and arresting at least 10,000, detaining many in grade schools. The deadly crackdown, however, has failed to quash the uprising, as reports of continuing clashes in Tehran and other cities are making their way out of the regime’s Internet blockade.

The uprising started in response to a drastic jump in fuel prices. For months, the regime had been trying to lift fuel subsidies but was afraid of the impending social unrest.

Recently, the regime’s calculus changed after being confronted with near-empty coffers, hungry regional proxies relying on its largesse, and serious threats to its “strategic depth” in Lebanon and Iraq. Caught between a bad and a worse option, it chose the former. On Thursday at midnight, as the country slept, fuel prices tripled and security forces were quietly planted at sensitive locations, ready to quell protests.

But the awakening that followed shocked the mullahs. Protests spread nationwide like wildfire, with youth taking center stage. Unprecedented levels of popular rage were directed at the corrupt rulers, including Supreme Leader Ali Khamenei himself. “Death to Khamenei” and “death to Rouhani” were the rallying cry, democracy the objective.

The scale and the depth of the uprising prompted a clearly panicked Khamenei to quickly intervene in an attempt to both quash internal disputes among alarmed officials and to swiftly nip the protests in the bud by publicly supporting the price hike and calling for the suppression of “rioters.”

The November uprising is unprecedented and exceedingly more audacious than the 2009 and 2017-18 uprisings.

First, it is the culmination of thousands of smaller but persistent protests over the past year-and-a-half. These included teachers, students, factory workers, nurses, truck drivers, embezzled investors, farmers and bazaar merchants, to name a few. Bottom line: Almost every segment of the population finds the situation unbearable.

Second, for the first time in the regime’s history, the urban middle class, rural residents, the working class in smaller towns, the “army of the unemployed,” and ethnic and religious minorities (in other words almost all Iranians) invigorated an extraordinary sense of national solidarity and courage against a common enemy. This character is similar to the 1979 uprisings that uprooted the equally corrupt dictatorship of the shah.

Third, the astounding pace of the uprising, expanding to over 171 cities in 11 days, speaks to the exceptionally explosive social situation. All it needs is a single spark.

Fourth, the regime itself is exceptionally fragile and terrified. Corruption is endemic, the economy will shrink by another 9.5 percent this year, unemployment rate is over 40 percent, inflation is over 50 percent and the value of the national currency has plummeted.

That is why Tehran shows a zero-tolerance policy in the current uprisings and started the indiscriminate killing of protesters in the first hours and shut down the Internet.

Fifth, the protests are much more organized. Equally common but unprecedented are the widespread attacks in almost every city on hundreds of regime institutions, including state-owned banks, religious seminaries, and paramilitary Bassij and IRGC bases. These are seen by people as symbols of corruption that must be burnt to the ground just like the regime itself.

Sixth, after extensive and meticulous activities inside the country in the past two-and-a-half years, the Mujahedin-e Khalq (MEK) “Resistance units” have succeeded in developing a deep bond with the population, making it palpably clear that many years of suppression and demonization failed to drive a wedge between young people and the organization.

Indeed, Ali Khamenei, senior officials and the state-run media were quick to highlight the MEK’s role in leading the uprising, admitting that the Resistance units are spreading, adapting and implementing increasingly sophisticated tactics to ensure successful anti-regime campaigns.

In a press conference on Nov. 24, Ali Shamkhani, the secretary for the regime’s Supreme National Security Council, said, “These people were connected to governments and the Mujahedin-e Khalq (MEK) … I believe 34 MEK members have been arrested so far. A vast network of individuals, operating not under the MEK’s name, but pursuing their line and modus operandi were also identified.”

Unlike some of its neighbors, Iran has a viable alternative to replace the mullahs, in the form of the National Council of Resistance of Iran (NCRI), which has been advocating for a secular, democratic and free Iran, summed up in the Ten-point Plan by its president-elect, Maryam Rajavi. It has won the praise and support of thousands of parliamentarians, human rights activists and prominent personalities and former officials around the world.

The Iranian people are ready for freedom. They are capable, have an alternative and are not afraid to make the ultimate sacrifice. Rest assured, Iran’s democratic destiny is firmly in the hands of its rebellious youth. All they ask is for the world to condemn the regime’s crimes against humanity and to support their cry for freedom.

Ali Safavi (@amsafavi) is an official with the Foreign Affairs Committee of the Paris-based National Council of Resistance of Iran (NCRI).