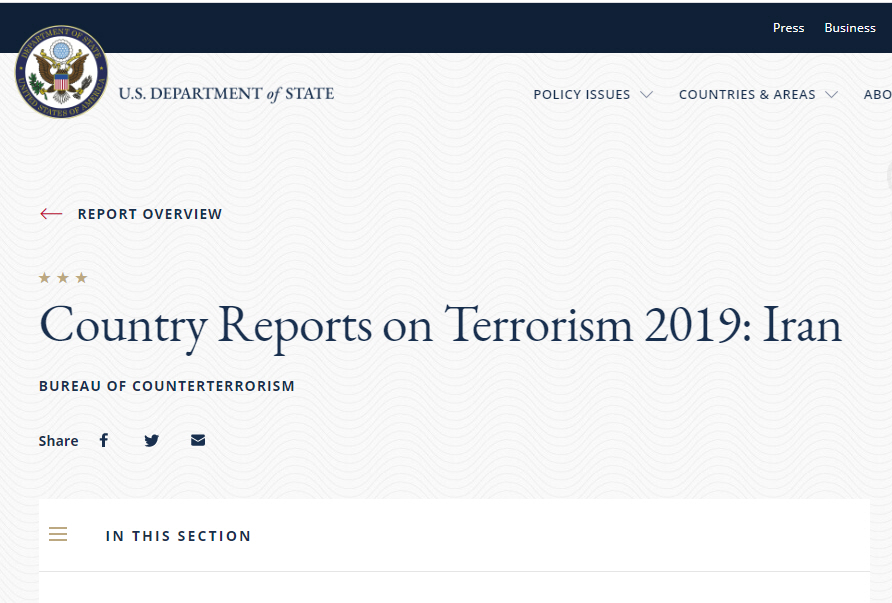 The United States called Iran the “foremost state sponsor of terrorism” in its annual Country Reports on Terrorism.

The report, released by the State Department on Wednesday, notes that Iran has continued to funnel money and resources for terrorist operations across the globe, including to groups such as Hezbollah. The report highlights the U.S. “maximum pressure” sanctions campaign and its impact on Iran’s coordination with foreign terrorist organizations.

“In the past, Tehran has spent as much as $700 million per year to support terrorist groups, including Hezbollah and Hamas, though its ability to provide financial support in 2019 was constrained by crippling U.S. sanctions,” the report reads.

It goes on to highlight that, in recent years, the Iranian regime, through its Islamic Revolutionary Guard Corps, has been involved in terrorist plots in North and South America, Europe, the Middle East, Asia, and Africa.

“Tehran also continued to permit an al-Qa’ida (AQ) facilitation network to operate in Iran, sending money and fighters to conflict zones in Afghanistan and Syria, and it still allowed AQ members to reside in the country,” it adds.

Tensions between the U.S. and Iran intensified during 2019, with the U.S. squeezing the regime with more and more sanctions. A major policy move of last year was when the State Department led by Mike Pompeo designated the IRGC as an FTO. The move was the first time a part of another government was designated as an FTO. Also included as part of the April designation was the Quds Force, an elite special operations unit within the IRGC that is responsible for operations on foreign soil, including support for Iranian proxy groups such as Kata’ib Hezbollah in Iraq, the Houthi movement in Yemen, and Hezbollah in Lebanon.

The designation set the stage for the January 2020 drone strike that killed both Quds Force commander Qassem Soleimani and Kata’ib Hezbollah commander Abu Mahdi al Muhandis. The U.S. and Iran were on the brink of war at the start of the year when Iran responded to the targeted killings by firing a barrage of ballistic missiles at Iraqi military bases housing U.S. forces, resulting in dozens of cases of brain trauma.

The report also points out that Iran has had its hand in attempted assassination and bombings across Europe, leading to icier relations with a number of countries where the plots were to be carried out.

“Albania, Denmark, and France all reduced diplomatic relations in response to Iran-backed plots to conduct assassinations or bombings in those countries,” the report reads. “These plots in the heart of Europe illustrate the global reach of Tehran’s terrorist capabilities.”

A bipartisan majority in the House recently pushed for a resolution that condemns Iran for its activities in Europe, namely against the National Council of Resistance of Iran, or the NCRI, a leading dissident group based in Europe that advocates for regime change in Iran. The resolution pointed to a 2018 plot to attack a Paris gathering of thousands of dissidents and foreign officials.

Alireza Jafarzadeh, deputy director of the Washington office of the NCRI, told the Washington Examiner on Wednesday that the new report highlights Iran’s willingness to attack those who oppose Ayatollah Ali Khamenei’s current regime.

“This report proves the extended arm of the Iranian regime’s terrorism in Europe and beyond the Middle East,” Jafarzadeh said. “The full collaboration of the Ministry of Intelligence, the Foreign Ministry, and the IRGC in conducting terror is a clear indication of systematic and institutionalized terrorism as a central tool of its statecraft.”

The Wednesday report doesn’t just focus on Iran but also details terrorist activities across the world last year. It discusses how the U.S. made “major strides” in 2019 to battle terrorism and extremism, including the destruction of the Islamic State’s territorial caliphate in Syria and the successful Delta Force operation that resulted in the elimination of ISIS leader Abu Bakr al Baghdadi. The report also hails the death of Hamza bin Laden, the son of al Qaeda mastermind Osama bin Laden, who was described as a “rising” leader in the terrorist network.