MENUMENU
Articles > Trump and Rouhani Each Highlight the Need for Change in Iran, in Very Different Ways

Trump and Rouhani Each Highlight the Need for Change in Iran, in Very Different Ways 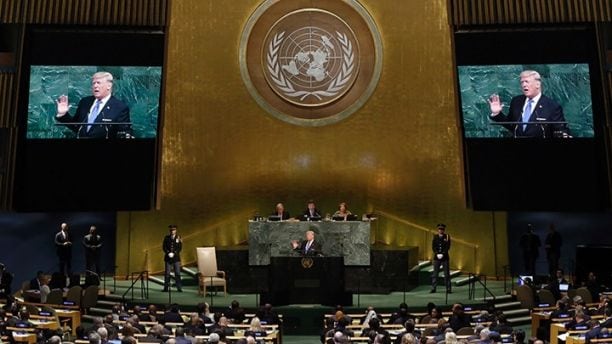 On September 19 and 20, the United Nations General Assembly hosted two competing speeches, one of which could have a dramatic impact on global policy-making and the future of the Middle East.

President Donald Trump expressed a predictably firm policy in respect to the Iranian regime, especially toward the Joint Comprehensive Plan of Action (JCPOA), known as the nuclear deal. The following day, Iranian regime President Hassan Rouhani responded by dismissing the White House’s antagonism toward the deal, effectively ignoring the U.S. president’s other criticisms of the theocracy.

Rouhani’s inability to acknowledge the validity of those criticisms is further evidence that the much hoped for “moderation” of the Iranian regime is a fantasy perpetuated by naïve Western policymakers who have been more concerned with prospective business deals then long-term regional stability and the core values of human rights. Trump’s speech, in turn, was indicative of emerging prospects for new policies toward the regime, which may finally address Iran’s malign activities and human rights abuses, and exert pressure for serious, even transformative change.

Although the JCPOA remained a major focus in Iran-related comments in President Trump’s speech at the UN, he also made notable connections between the agreement and such issues as Tehran’s longstanding support of terrorism and its victimization of the Iranian people.

In speaking of these wrongdoings, Trump acknowledged, “rather than use its [Tehran’s] resources to improve Iranian lives, its oil profits go to fund Hezbollah and other terrorists that kill innocent Muslims and attack their peaceful Arab and Israeli neighbors.”

Rouhani’s actions throughout his first term and during the very beginning of his second have only fueled activism among the pro-democracy Iranians and the Iranian expatriate community. This crucial trend is one that Mr. Trump discussed during his UN speech, declaring, “the entire world understands that the good people of Iran want change,” and adding “Iran’s people are what their leaders fear the most.”

Such fear was evident from what was said – and more to the point, what was left unsaid – in Rouhani’s speech. Citing Trump’s description of Iran’s behavior in matters other than the nuclear agreement, Rouhani simply rejected what he called “baseless allegations” and moved on from the topic, while thousands of Iranians rallied across from the UN in rejection of the entire clerical regime and in favor of a free Iran.

This sort of denial and dismissal follows the pattern exhibited by Iran’s ruling clerics, who tried for many years to cover up the largest crime against humanity since World War II. In the summer of 1988, the Iranian regime subjected virtually all of its political prisoners to minutes-long trials intended to determine whether they still harbored opposition to the theocratic system. Those who failed to pass the loyalty test were executed, and most were buried in secret mass graves. In a matter of months, as many as 30,000 people were killed because of their political beliefs, and this incident set the tone for the regime’s handling of dissent through the present day. Even to date, some of the key players in the massacre have been prominent members of Hassan Rouhani’s cabinet.

Noting that “oppressive regimes cannot endure forever,” the American president predicted that the Iranian people would soon face an opportunity to take back their nation from the theocrats.

In a statement following President Trump’s speech, National Council of Resistance of Iran (NCRI) President-elect, Mrs. Maryam Rajavi, welcomed his remarks as they effectively echoed the desire of the Iranian people for regime change, which the Iranian opposition has been working toward for the past 36 years. She urged a series of practical measures, including unhindered and intrusive inspection of military and non-military sites in Iran and the establishment of a commission of inquiry into the 1988 massacre of political prisoners in Iran.

The need for such change is highlighted by Rouhani’s speech as much as it is by Trump’s, insofar as Rouhani’s position demonstrates once again that the problems of repression and neglect in Iran will not be addressed by the existing regime. They must instead be addressed by the pro-democratic voices inside the country and their allies around the world.

Mrs. Maryam Rajavi welcomes the First Testimony by a US President Underscoring the Need for Change in Iran
Comment
Thousands Rally for a Free Iran as U.S. Weighs Policy Options