MENUMENU
Articles > Mrs. Maryam Rajavi welcomes the First Testimony by a US President Underscoring the Need for Change in Iran

Mrs. Maryam Rajavi welcomes the First Testimony by a US President Underscoring the Need for Change in Iran 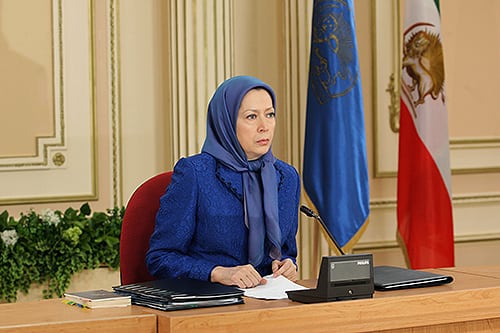 Recognition of the NCRI as the only democratic alternative to the clerical regime is indispensable for rectifying the U.S.’s past disastrous policy on Iran

In a portion of his address to the 72nd session of the UN General Assembly on September 19, U.S. President Donald Trump made remarks about the people of Iran and the religious fascism ruling the country. He accurately attested to the fact that “the longest-suffering victims of Iran’s leaders are, in fact, its own people.” He also said, “The entire world understands that the good people of Iran want change.”

The President of the United States pointed out that the resources belonging to the Iranian people are diverted in order to shore up Bashar al-Assad’s dictatorship in Syria, fuel Yemen’s civil war, and the Hezbollah. He also said the regime’s “chief exports are violence, bloodshed, and chaos” and that “Iran’s people are what their leaders fear the most.”

Maryam Rajavi, the President-elect of the National Council of Resistance of Iran (NCRI) welcomed President Trump’s reamarks and characterized them as the first testimony by a US President over the past 38 years to underscore the need for regime change in Iran by the Iranian people, a cause that has been the declared policy of the Iranian Resistance for the past 36 years. Mrs. Rajavi added, “The recognition of the National Council of Resistance of Iran as the only democratic alternative to the terrorist, religious dictatorship in Iran is indispensable to ending and rectifying the United States’ disasterous past policy towards the people of Iran.”

Mrs. Rajavi cited the United States’ breach of promises to protect the residents of Ashraf and Liberty in Iraq, the terrorist designation of the People’s Mojahedin Organization of Iran (PMOI/MEK), which paved the way for the suppression of the main Iranian opposition to the mullahs, and concessions to the Iranian regime tied to the JCPOA (Joint Comprehensive Plan of Action), as some of the most embarrassing examples of U.S. actions with significant costs and losses for the people of Iran.

The Iranian Resistance believes that the statements of the U.S. President need to be supplemented by a series of practical measures in order to be made into reality. Such measures could include:

-The dossier of the Iranian regime’s crimes, particularly the massacre of 30,000 political prisoners in 1988, must be referred to the International Criminal Court, and the regime’s leaders and perpetrators of these crimes must face justice;

-The clerical regime must be evicted from the Middle East and the Islamic Revolutionary Guard Corps (IRGC) and its mercenary militias must be expelled from Iraq, Syria, Yemen, Afghanistan and Lebanon;

-And, the previous UN Security Council resolutions on the clerical regime’s nuclear weapons projects, ban on nuclear enrichment, as well as free and unconditional inspections of military and non-military centers must be implemented.

Iran Remembers the Murderous Summer of 1988
Comment
Trump and Rouhani Each Highlight the Need for Change in Iran, in Very Different Ways