MENUMENU
Articles > David Shedd: The IRGC has actively engaged in terrorist acts against the American people

David Shedd: The IRGC has actively engaged in terrorist acts against the American people 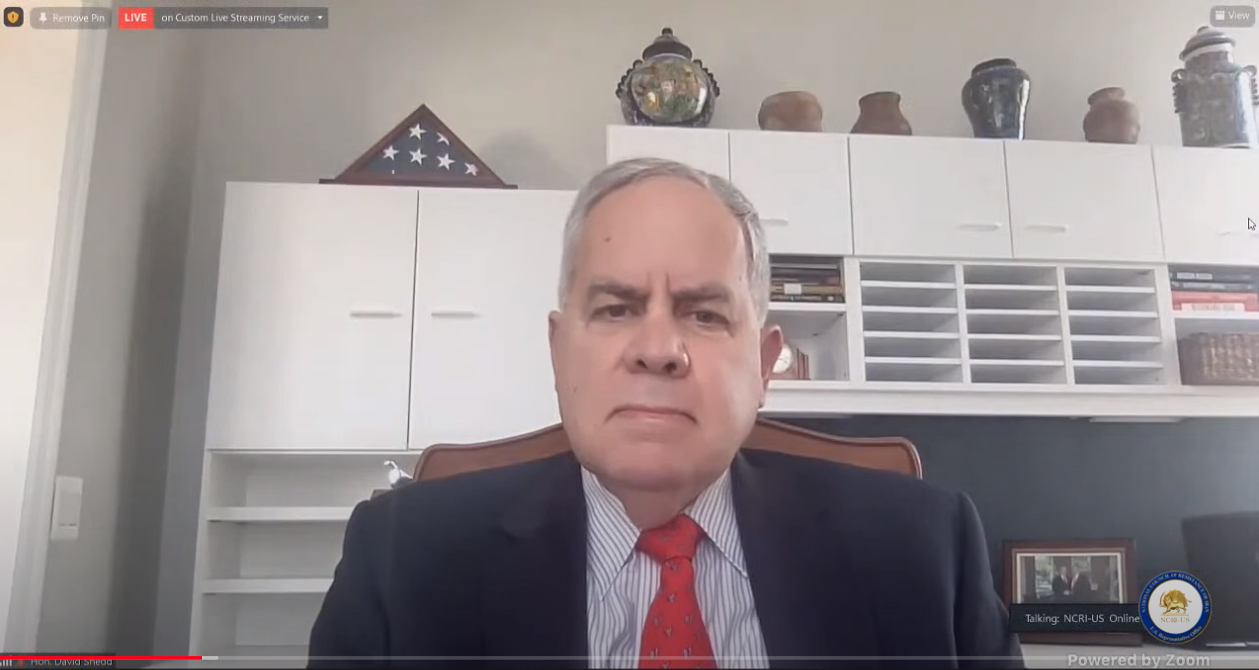 One of the conference speakers was Honorable David Shedd who is a visiting fellow at the Heritage Foundation and was the former Acting Director of the Defense Intelligence Agency.

Thank you very much, Alireza. And Ms. Samsami, a happy Nowruz to you. Let me build on Judge Mukasey’s comments about the IRGC in particular. And I will leave it to the other distinguished colleagues to go deeper into the JCPOA 2.0 that’s being negotiated in Vienna, with the appearance anyway of coming to conclusion fairly quickly.

As an intelligence professional, I always looked, at Judge Mukasey would say, at the facts. And the unemotional perspective of thinking of delisting an organization that for 40 years has been the vanguard of the revolution is unfathomable to me based on the facts that speak for themselves. As the vanguard of the revolution, the Iranian Revolutionary Guard Corps has been at the center of a strategy, both at a strategic level but also at a tactical level, of using terrorism as an instrument of national power. And to believe that being soft on them and somehow obtaining an agreement to delist them in exchange for them to behave otherwise is to say the equivalent of having someone change their DNA. Their DNA is terrorism as an instrument of national power, against the Iranian people inside Iran, and externally in its near abroad and around the globe. Terrorism is a central pillar of the Iranian regime. It has been and will continue to be because it is philosophically completely committed to the use of terrorism in order to stay in power and to promote the Shia revolutionary aspects of the regime.

When I think of the U.S. policy of delisting them, … American lives that have been lost or maimed in the war in Iraq, Khobar Towers, and I could go on in terms of Syria and elsewhere, where the IRGC has actively engaged in terrorist acts against the American people as well, … what kind of message does this send to other nations that might use as an instrument of national power the role or the aspects of terrorism as a means for either staying in power or promoting their interests abroad.

When I think of the U.S. policy of delisting them, I also go back to not only hundreds of American lives that have been lost or maimed in the war in Iraq, Khobar Towers, and I could go on in terms of Syria and elsewhere, where the IRGC has actively engaged in terrorist acts against the American people as well, very specifically killing our men and women in uniform. But I think even more broadly, what kind of message does this send to other nations that might use as an instrument of national power the role or the aspects of terrorism as a means for either staying in power or promoting their interests abroad. What message does it say by delisting from the foreign terrorist organization, as Judge Mukasey pointed out, that individuals or organizations associated with the IRGC while potentially flawed in its implementation in fully executing U.S. policy on the sanctions against those individuals or organizations, what message does it send to those who think that they can get away with terrorist acts and then simply be written off from an agreement that is non-enforceable at its very core when it comes to the JCPOA? Finally, how is it possible to even contemplate another round of an enormous amount of financial support to the Iranian regime that will very quickly go into the vanguard of the revolution, which is the IRGC and the Quds Force?

So again, with my background as an intelligence officer, facts-driven, and looking at the perspective of a regime that does not understand anything other than strength and force on the other side of the table, why would they commit to softening their line in the use of the IRGC? And so for that very reason, I believe any contemplation of delisting the IRGC and the Quds Force and the individuals and/or the organizations associated with them as a terrorist organization is unthinkable, bad policy, and ultimately will hurt not only the United States and its global interests but violate the very values that we have supported for the last 40 years when it comes to countering the Iranian regime that we know so well to be instantiated in Tehran today.

Yet at the same time with the courage and the forthrightness of that opposition that speaks up on a daily basis against this regime in Tehran, we need to stand with the Iranian people is not delisting the IRGC and not acceding to a demand that is done through a third party that is the Russians and the Chinese and other members of this negotiating team that have been in Vienna while we sat outside in the anteroom waiting to see what comes out of there.

So, thank you very much for this opportunity. I wish it were a more glowing perspective for 2022, but hope springs eternal and we stand with the Iranian people in speaking up against foolish and bad policy and ill-conceived policies that ultimately will damage not only Iran but the United States and those who stand for freedom. Thank you very much.

Former Democratic Sen. Robert Torricelli: No sanction is too tough until the Iranian people have their freedom
Comment
Former Undersecretary of State for Arms Control & International Security Robert G. Joseph: Iran will never give up its nuclear weapons program