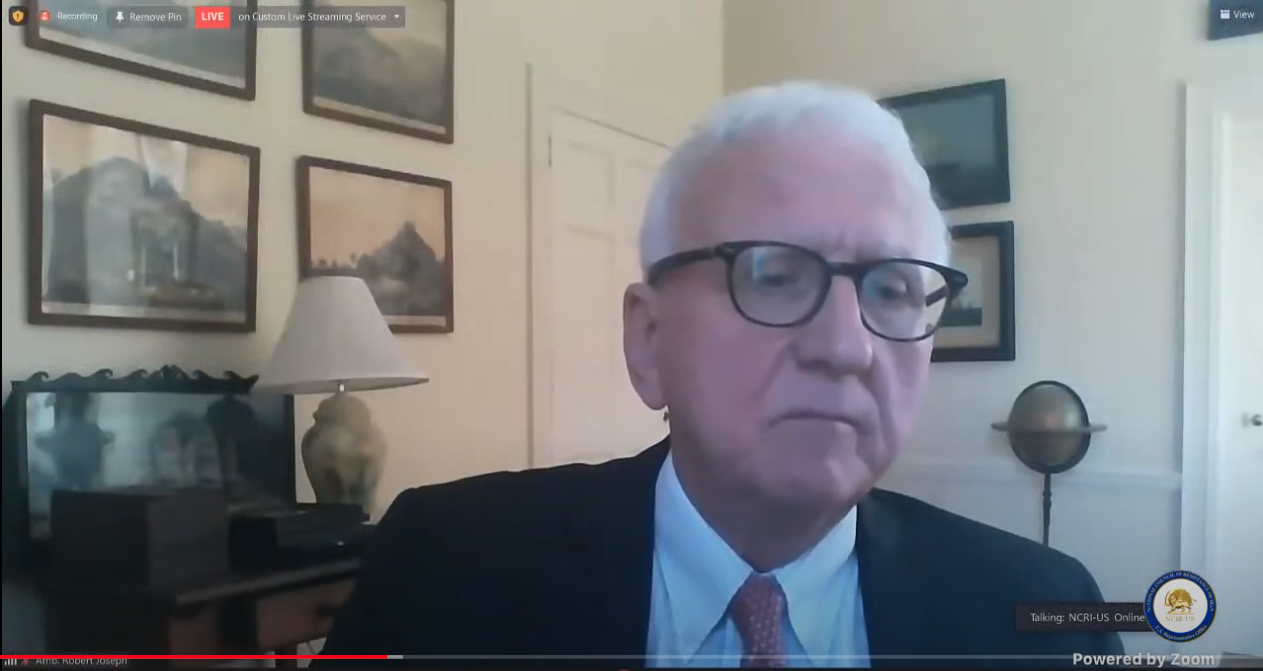 One of the conference speakers was Amb. Robert G. Joseph, the former Undersecretary of State for Arms Control & International Security.

Alireza, thank you. Please allow me to join with others in extending my best wishes for the Nowruz holiday to you and all of your colleagues in Washington, and of course to all of your colleagues at Ashraf 3 in Albania. I hope and I trust that this year will bring us closer to our shared goal of a free, democratic, and secular Iran.

Today the world’s attention is focused on Putin’s war in Ukraine, bringing both heartbreaking images of civilian deaths and inspirational images of Ukrainian resistance fighting the Russian invaders. This may be a transformational event, one that could change the course of history not only in Europe but well beyond, as we can no longer escape the reality that evil exists in the world without regard to the idealism of the rules-based international order.

“You might ask yourself, how is this even possible? We know that these are empty promises that would never be fulfilled. As others have pointed out, the IRGC is a terrorist organization. As David said, terrorism is in their DNA. … How can this administration believe that Iran would keep such commitments? How can this administration believe that rejoining the JCPOA will bring détente with Iran and a more stable region?”

And as we think about Ukraine, another potentially transformative event is taking place, and that is the fight for freedom from the religious dictatorship in Iran. But this war is being played out without constant images of death and destruction or the concentrated attention of the media. Instead, the focus is on diplomatic negotiations to bring the United States back into the JCPOA, the 2015 nuclear accord. The unintended consequences of such an agreement, which some press reports indicate are imminent, risk the very opposite of what the West rightly seeks in support of Ukraine’s heroic struggle.

Little is known about the agreement and what has been conceded by the United States in the negotiations. Even Senator Menendez, Chairman of the Foreign Relations Committee stated recently that he doesn’t know what’s been agreed. We’ve received press reports in the nearly year-long Vienna talks that the U.S. had made concession after concession and that the Iranian side, never willing to take yes for an answer, has pocketed each one only to come back and demand more. While press reports are not definitive, we know for sure that at least one negotiator on the U.S. side has resigned in protest of the U.S. position is too weak. I can assure you that’s an extraordinary occurrence.

As Judge Mukasey and others have noted, we’ve seen in recent press reports that the U.S. may have already offered to list the terrorism designation of the Revolutionary Guard, described as the last remaining issue, if Iran agrees not to target Americans and to rein in regional oppression. You might ask yourself, how is this even possible? We know that these are empty promises that would never be fulfilled.

As others have pointed out, the IRGC is a terrorist organization. As David said, terrorism is in their DNA. The organization has the blood of hundreds of Americans on its hands dating back decades and continuing until today. It commits terrorism every day throughout the region, directly and through its proxies in Syria, in Lebanon, in Iraq, and the list goes on and on. How can this administration believe that Iran would keep such commitments? How can this administration believe that rejoining the JCPOA will bring détente with Iran and a more stable region? Never mind that these dangerous fantasies were proved false in 2015 when the tens of billions of more dollars given to Iran were used to do just the opposite. Yet they still seem to guide the administration’s grand policy. Little wonder why our friends and allies in the region are reassessing their security relationship with the United States and looking to Beijing and in some cases even to Moscow for support. Little wonder why their leaders won’t pick up the phone when the president calls.

So, how should we assess the agreement once it is made public? Senator Menendez has suggested three very reasonable criteria. First, it should roll back Iran’s nuclear capabilities and close the pathway to a nuclear weapon. Second, it should provide for effective verification. And third, it should constrain Iran’s missile force. Yet none of these have any prospect for being met. The Potemkin constraints on the nuclear program, even if observed, will begin to expire in 2026. Iran will, without doubt, fail to come clean on its weaponization program, despite longstanding promises, and Iran has rejected all constraints on its missile forces. What we do know, because we’ve seen the movie before, is that Iran will take the windfall it receives from the lifting of sanctions and use it to further its aggression in the region, to fund terrorist activities, to expand its missile and nuclear programs, and to repress the people of Iran who seek their freedom and dignity. Statements that we will negotiate follow-on agreements to deal with these issues simply insult one’s intelligence.

But most of all, I believe the main reason is the administration’s failure to understand one basic point: the Iranian regime will never, will never give up its nuclear weapons program. It is a weak regime. It is a desperate regime at war with its people. It seizes the lesson from Gaddafi and Libya and likely now from Ukraine that it must have a nuclear weapons capability as a guarantee to deter outside intervention in the civil conflict that is certain to come as the Iranian people rise up in their demand for freedom and dignity. It is this basic fact that should guide U.S. policy, providing hope and assistance to the Iranian opposition, not a lifeline to the mullahs. Thank you for the invitation to join you this morning. It’s been a pleasure.

David Shedd: The IRGC has actively engaged in terrorist acts against the American people
Comment
A nuclear Iran will have a devastating consequence for the region and the world, says Amb. Joseph DeTrani