MENUMENU
Articles > A nuclear Iran will have a devastating consequence for the region and the world, says Amb. Joseph DeTrani

A nuclear Iran will have a devastating consequence for the region and the world, says Amb. Joseph DeTrani 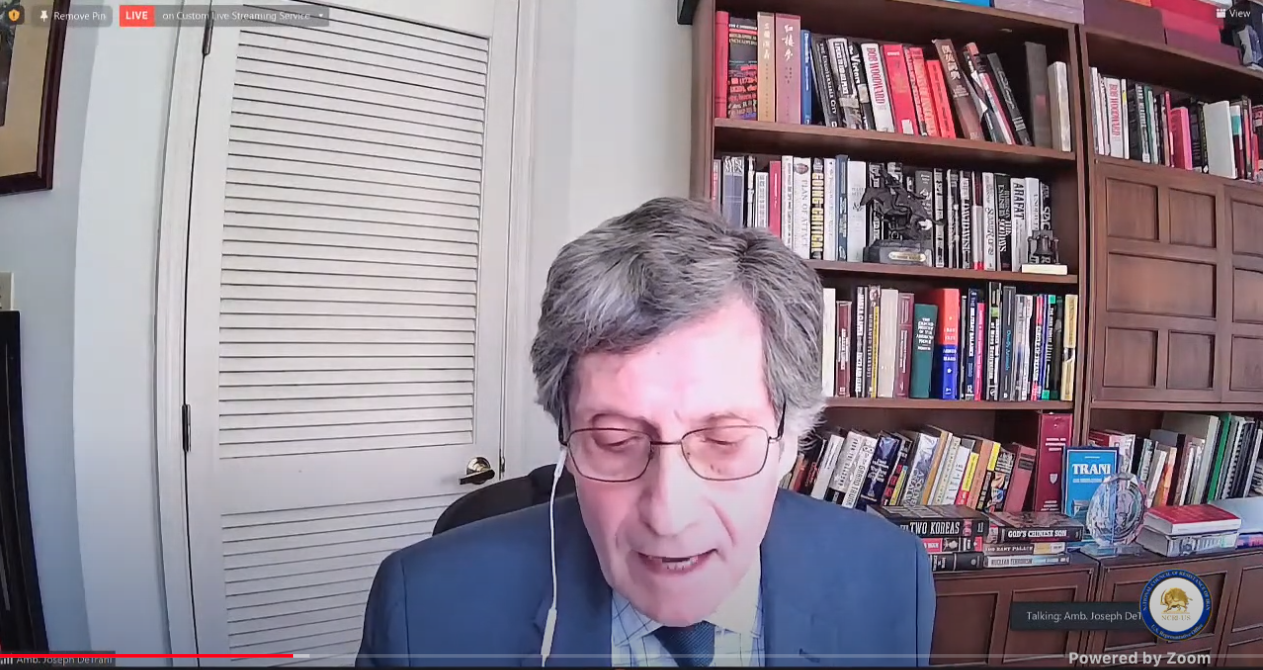 One of the conference speakers was Amb. Joseph DeTrani. Amb. DeTrani is the former Special Adviser to the Director of National Intelligence.

Thank you, Alireza. It’s an honor being here. And congratulations on Nowruz and having this distinguished forum to talk about this very, very important issue. My comments today will be bifurcated. I’d like to talk very briefly about the geopolitical aspects of Iran’s behavior and then get into the JCPOA and what Iran has been doing with its nuclear weapons program. And further to Director Shedd and Judge Mukasey, I think their comments were just outstanding.

Let me just add this on the geopolitical side. Over the years, we’ve seen Iran’s behavior. We’ve seen what they’ve done with Hezbollah and Lebanon. We’ve seen what they’ve been doing with the Houthis in Yemen. We see very clearly and our distinguished colleagues have just spoken about the IRGC, the Quds Forces, and their activities in Iraq, in Syria. I mean it’s blatant, it’s out there. And this preceded the JCPOA and subsequent to the JCPOA in 2015. I think we should remember this, when we were talking about the JCPOA and talking about implementing it, there was hope, some sense that with this Iran will moderate its behavior. It will cease its terrorist activities, its intrusive threatening behavior, whether it be in Yemen, whether it be in Iraq, Syria, Lebanon, etc. But this has not happened. Subsequent to the JCPOA 2015 it continues—not only did it continue, it intensified. So, I think we have to be realistic on the geopolitical side of the equation. Iran is on a path and all indications are they will not change what they are doing with their Quds Force, they will not change with the IRGC, and they will not change what they’re doing with a few of their proxies. So, I totally agree with my colleagues when they talk about taking the IRGC off the list of foreign terrorist organizations. What a message that would be, it would be profound.

Let me move to the nuclear side of the ledger. Because that’s such an important side. Because we could see in the Middle East, certainly we’re seeing some of this in East Asia with North Korea, we could see in the Middle East if Iran persists with their programs—let’s be very candid about it—up until 2003 we have definitive proof that Iran was pursuing a nuclear weapons program. Judge Mukasey talked very clearly about what the Israelis discovered in 2018 to show that this not only goes back, it goes back to the 1970s. But certainly up until 2002, they were pursuing a nuclear weapons program, with great vigor.

And then prior to the JCPOA in 2015, Iran was enriching uranium to the 20% purity level. What does that mean, ladies and gentlemen? That means that they are taking the enrichment to the 20% purity level, it would not take that much time to move to 90, 93%, which is weapons-grade enriched uranium. And this is what we were seeing prior to it. So, with the JCPOA there was a sense there that Iran would then cease and desist, come down to approximately 3.2, 3.6% purity of enrichment. But up until that time, we saw problems with the IAEA getting their monitors to visit facilities in Iran. We saw that prior to the JCPOA, we certainly saw it subsequent to the JCPOA.

The U.S. withdrew in 2018 from the JCPOA, but that didn’t change anything. Iran, in fact, intensified its efforts to enrich uranium to a higher level, enrichment up to 60%. Problems with the IAEA getting inspectors, monitors, into facilities. Building advanced centrifuges that would take fewer hours, fewer days, fewer months to enrich to a level of purity that would permit a nuclear weapons program. Iran is at a threshold as a nuclear weapons state as we speak now.

The logic here is now coming back to the JCPOA, Iran will cease and desist, would move in a different direction. Well, we know from the JCPOA that there are sunset clauses, sunset clauses for centrifuges, building more sophisticated centrifuges so that they can spin that much faster so that much quicker you could have high purity enriched uranium for nuclear weapons. And that’s with a ten-year period, that means up to 2025. The same thing with enrichment, 15 years, which means up to 2030. 2030 Iran could cease and desist and say we can enrich up to 90%, this is the point.

So, I think there’s a cry for if we can’t moderate their geopolitical behavior, at least on the nuclear side of the ledger, because it’s a message to all the countries in the region and the world, let’s at least edit, moderate, change, amend the JCPOA. Amend it accordingly and prohibit enrichment. And that’s why I cite and I applaud what Senator Menendez has been doing with his colleagues in the Senate with Senate Resolution 511, that reads, just a small section of it, that reads “Establish original fuel bank that would assist international efforts to avoid a destabilizing arms race in the Middle East and would promote the peaceful use of nuclear power.” This is where we need to be going. Because if Iran persists with their program, and they can remain a threshold nuclear weapons state, other countries, whether they be Egypt, whether they be Saudi Arabia, whether they be Turkey, will say well maybe we need to also be threshold nuclear weapons states. And that’s significant, ladies and gentlemen. and as we see this with the tragic war going on in Ukraine, and with Putin putting on the table his nuclear weapons at a high alert level, we need to be moving in a different direction with nuclear weapons and nuclear technology.

So, I applaud what Senator Menendez and his colleagues in the Senate are doing, trying to move forward. But we have a task in front of us. And we have to prevail with Iran. And I thank you very much for permitting me to share some of my views with you.

Former Undersecretary of State for Arms Control & International Security Robert G. Joseph: Iran will never give up its nuclear weapons program
Comment
Amb. Mitchell Reiss: There should be no debate over removing the Foreign Terrorist Organization (FTO) designation for the IRGC