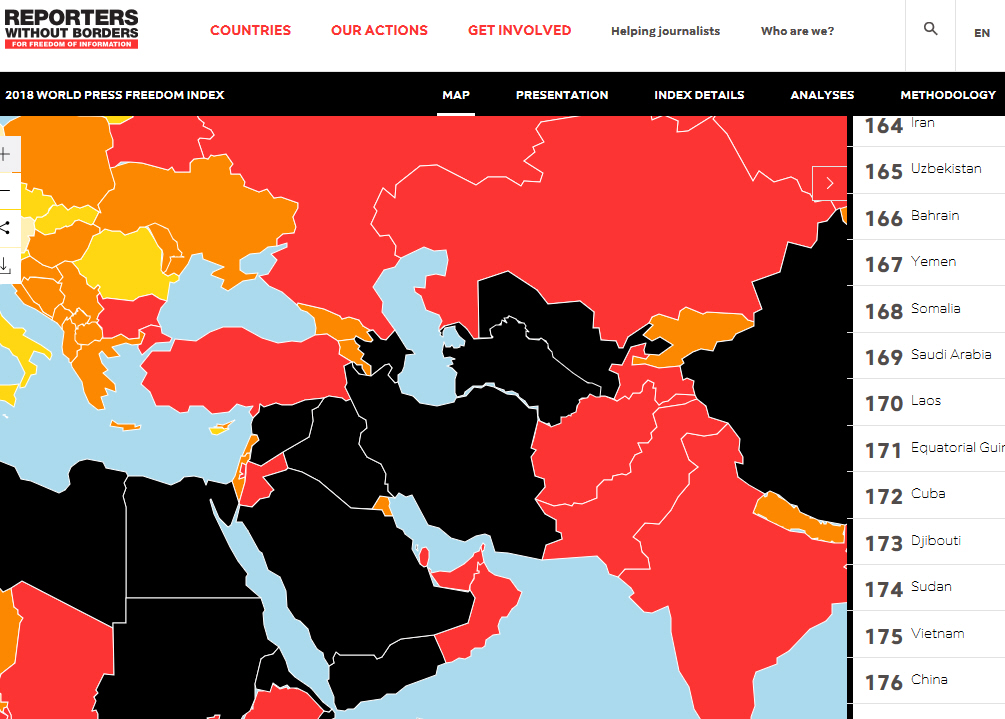 Since Khomeini took power in the aftermath of the 1979 revolution, the Iranian regime has conducted a harsh crackdown on the press, jailing and/or killing any reporter who dares to write what he or she sees. The mullahs view any independent media as an innate threat to their grip on power, and for years this tactic of brutal suppression ruled supreme. More recently, however, the regime has grown more sophisticated in its methods of suppressing dissent. While it still uses overt tactics such as arrests and executions, it has also discovered a more pernicious and, in many ways, more effective method of achieving its aims.

Dr. Ivan Sascha Sheehan,  Executive Director of the School of Public & International Affairs at the University of Baltimore, points out in his most recent article, “The regime has handpicked certain news organizations to advance a ‘controlled’ media presence in Iran. Local assistants and translators for foreign journalists require permits from the Ministry of Culture and Islamic Guidance. These apprentices normally come from the Intelligence Ministry and have prior backgrounds in local state media. Over time, they help prepare reports and interview top regime officials who would normally avoid talking to the international press. As relationships develop, those who demonstrate a particular proclivity to toe the line go on to become permanent news staff and are sent abroad.”

These embedded journalists can then be used to plant stories in the mainstream media that are either sympathetic to the Iranian regime or openly hostile to those opposing it. Since most Western journalists do not have extensive experience in Iran, they come to depend on those who do when writing stories that involve the country. As a result, a few well-placed assets in the Western media can have an outsized effect, shaping coverage of Iran for those who simply do not know any better.

These embedded journalists tend to shape most of their stories around a common theme: discrediting the Iranian resistance, in particular the most well-organized opposition group, the People’s Mojahedin Organization of Iran (PMOI), also known as the Mujahedin-e Khalq (MEK), the principal member of the National Council of Resistance of Iran (NCRI). This theme can be seen in the multiple salacious articles that have been written recently about the MEK’s leadership and members in Albania, who have come under attack by certain reporters, many of whom have a well-documented background writing for Iranian state media.

Indeed, as Prof. Sheehan notes, “Many of these so-called journalists of Iranian origin previously worked for Iran’s state-controlled media, and some parrot the regime’s talking points as if they are still on the payroll. Most have found comfortable homes in left-leaning media outlets in the West, including MSNBC, Al-Jazeera English, Britain’s Channel 4 News, The Guardian, and The Independent, where they freely leverage their bylines to do Tehran’s bidding with little pushback.”

The MEK’s new home near Tirana, built and paid for by the group itself, hosts more than 2,500 MEK members who are all recognized as refugees by the UN. The regime’s reporters have fabricated unfounded allegations about their activities, personal choices, and the lifestyle they have chosen in pursuit of freedom and democracy in their homeland, all as part of malicious, albeit desperate, attempt by a moribund regime to discredit Iran’s main resistance organization.

Although the regime’s propaganda is insidious, it is also doomed to fail. The millions of Iranians who desire to live in freedom know lies when they see them, and will not rest until Iran is free.

Taking stock of Iran’s track record on Human Rights Day
Comment
Sanctions Will Harm Only the Iranian Regime, Not the Iranian People