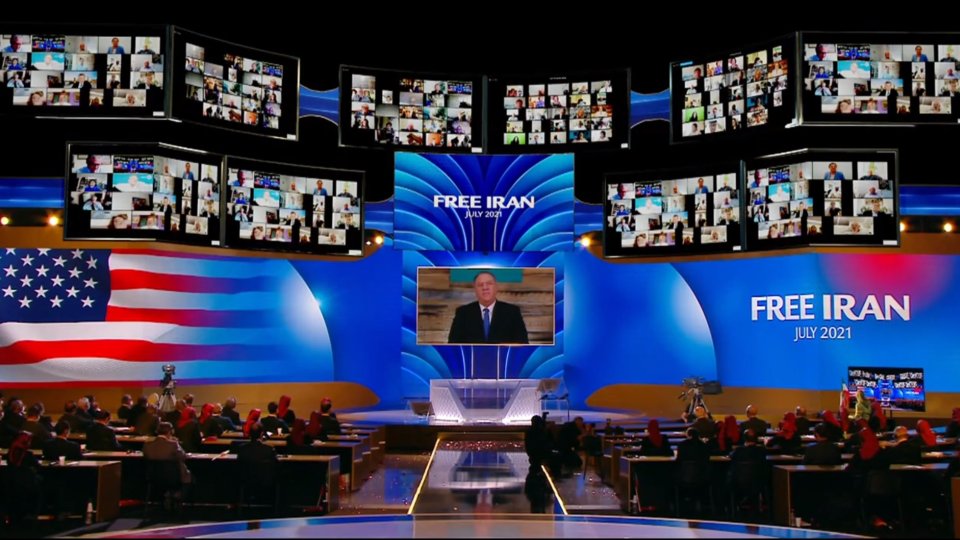 Former Secretary of State Mike Pompeo on Saturday urged Iranian dissidents to “keep up the fight” against the hardline regime in Tehran — as a top dissident group gathered in a summit to renew calls for a secular and democratic Iran.

“We must continue to support the Iranian people as they fight for a freer and more democratic Iran in any way that we can,” Pompeo told attendees at the National Council of Resistance of Iran’s (NCRI) “Free Iran World Summit.” “There is so much good work that American civil society can do to further this goal.  It is work that your organization is actively engaged in – keep up the fight.”

Pompeo was one of a number of speakers from both sides of the aisle, including Sens. Ted Cruz, R-Texas, Cory Booker, D-N.J., Robert Menendez, D-N.J., and House Minority Leader Kevin McCarthy, R-Calif., along with politicians from Europe.

“Their desire for democracy and justice outweighed their fear of being injured or taken to jail,” he said, saying he was confident that one day the world would see a “free and open” Iran.

The largely virtual event included hundreds of Iranian activists appearing from inside Iran at key monuments, their faces blurred, to show the continued resistance within Iran.

The summit comes just weeks after hardline Ebrahim Raisi won the country’s presidential election amid mass boycotts of the process and accusations of rigging by the regime. Raisi has been sanctioned by the U.S. for his participation in human rights abuses — and was tied to mass execution of dissidents in the 1980s.

NCRI President-elect Maryam Rajavi said that the forcing of Raisi into power was a sign of the regime’s weakness and an effort to keep power against democratic uprisings.

“But they have actually dug their own graves,” she said. “They are like a scorpion that stings itself after being surrounded by flames. Only the regime’s fear of the uprisings and the supreme leader’s political demise can explain Raisi’s taking office.”

The regime was weakened by a series of protests, including over its handling of the economy and the COVID-19 pandemic, at home and increased pressure by U.S. foreign policy under the Trump administration. The U.S. departed the Iran nuclear deal in 2018 and imposed waves of sanctions under a “maximum pressure” campaign against the regime.

Pompeo used his remarks to take aim at efforts in Washington to re-engage with Iran and re-enter the Iran nuclear deal — and warned against efforts to finance the Iranians as part of an agreement.

“We cannot shower the Ayatollah with money and economic benefits in the hopes that he won’t use it to inflict terror,” Pompeo said. “This thinking is foolish, dangerous and backwards.”

“The program of sanctions and pressure employed by the Trump administration needs to remain the model for engagement with Iran if we want to ensure the security of the American people and better lives for the Iranian people,” he said.

Raisi recently said he would not meet with President Biden, at least until sanctions were removed.

“The U.S. is obliged to lift all oppressive sanctions against Iran,” Raisi said at a news conference.