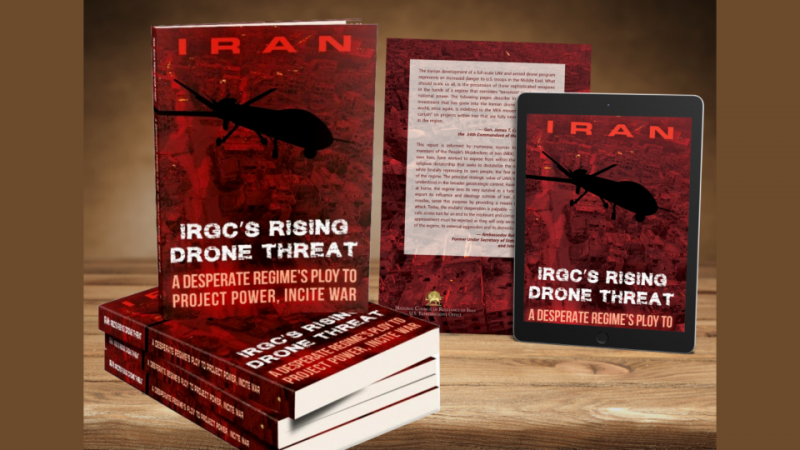 New Book establishes the leading role of the IRGC’s Quds Force in proliferating drones to incite war and terrorism in the region, unveils front companies.

WASHINGTON, DC, January 7, 2022 — The newly released book, ‘IRAN: IRGC’s Rising Drone Threat – A Desperate Regime’s Ploy to Project Power, Incite War,’ is now available, in print and digital formats, on all major book platforms. Quickly ranking as the “#1 New Release” in History of Iran category on Amazon, the book is available online on Barnes and Noble, Apple Books, Books-A-Million, and other major bookstores.

The 70-page manuscript released by the U.S. Representative Office of the National Council of Resistance of Iran (NCRI-US) provides extensive details on eight sites used for the production and seven sites used for the training and utilization of Iran’s deadly UAVs. The book goes on to provide extensive details about front companies that use civilian cover to circumvent sanctions and provide material, parts, and technology to the Islamic Revolutionary Guard Corps (IRGC).

The manuscript offers a review of the most important organs of production, use and export of unmanned aerial vehicles (UAVs) by the Iranian regime, and in particular the Islamic Revolutionary Guard Corps (IRGC), which uses UAVs to create crisis and export terrorism on a wide scale in regional countries. Tehran also relies on drones as propaganda tools to convey an undeserved impression of military prowess. In fact, the clerical regime lacks the military capability to build advanced weaponry, which is why it has invested heavily in recent years in a variety of UAVs.

Tehran is endeavoring to carry out the maximum level of terrorism and destabilizing activities while paying the least political and military price. One example is the attack on the Aramco refinery in Saudi Arabia on September 14, 2019, for which the IRGC never accepted responsibility, using rockets and UAVs. This policy of plausible deniability is also evident in the use of UAVs by proxy forces affiliated with the IRGC, and underscores the regime’s political weakness in the international and regional arenas. The tactic is explored in detail in the newly released book.

This report is based on information obtained from the network inside Iran of the main Iranian opposition, the People’s Mojahedin Organization of Iran (PMOI), also referred to as the Mujahedin-e Khalq (MEK). It specifies the main entities involved in the production of UAVs, as well as the organs that use them.

In the first chapter, entitled “Production of UAVs,” the history of the IRGC’s production of the earliest types of UAVs during the Iran-Iraq War is reviewed, after which the Quds Air Industries, affiliated with the Air Industries Organization in the Ministry of Defense, and 7 other related bodies became involved in such production. Next, the ways in which equipment is smuggled from abroad, including by front companies and individuals, and the production of various parts are explained. A variety of UAVs used by the IRGC are introduced.

The second chapter, “Utilization of UAVs,” offers a brief overview of how the IRGC has used drones historically, and outlines the various organs that employ UAVs. Among them, the UAV Command under the IRGC Aerospace Force, which has various UAV centers across Iran, is the most important entity for UAV training and use. Other military and law enforcement agencies that utilize UAVs are also named.

The third chapter, “Using UAVs to incite war and terrorism,” discusses the utilization of UAVs to advance terrorist policies and regional meddling by the IRGC’s Quds Force. The IRGC’s drone command center was directly involved in the attack on the Saudi Aramco oil refinery. The Quds Force Intelligence and Training directorates have dedicated certain sections to the production, training and export of UAVs to other countries in the region. The IRGC exports drones to Syria, Iraq, Lebanon and Yemen. UAV parts are flown to these countries in IRGC planes as well as shipped through land crossings, and are subsequently assembled in the host countries. Local mercenaries receive training at IRGC Aerospace Force locations in Iran.

The exceptional detail and quality of the intelligence gathered and presented in the book have been widely acclaimed by foreign policy and military experts. In the book’s foreword, Gen. James T. Conway, USMC (Ret), the 34th Commandant of the U.S. Marine Corps, writes: “The Iranian development of a full-scale UAV and armed drone program represents an increased danger to U.S. troops in the Middle East. What should scare us all, is the possession of these sophisticated weapons in the hands of a regime that considers ‘terrorism’ an element of its national power. The following pages describe in detail the massive investment that has gone into the Iranian drone effort. The civilized world, once again, is indebted to the MEK movement for ‘raising the curtain’ on projects within Iran that are fully intended to raise havoc in the region.”

Ambassador Robert Joseph, former Under Secretary of State for Arms Control and International Security and Special Envoy for Nonproliferation, writes in the preface that “This report is informed by numerous sources inside Iran, primarily members of the People’s Mujahedeen of Iran (MEK) who, at risk of their own lives, have worked to expose from within the true nature of the religious dictatorship that seeks to destabilize the region through force while brutally repressing its own people, the first and foremost victims of the regime. The principal strategic value of UAVs to the regime is best understood in the broader geostrategic context. Having lost all legitimacy at home, the regime sees its very survival as a function of its ability to export its influence and ideology outside of Iran. Drones, like ballistic missiles, serve this purpose by providing a means of intimidation and attack. Today, the mullahs’ desperation is palpable — we can see it in the calls across Iran for an end to the intolerant and corrupt regime. Policies of appeasement must be rejected as they will only serve to prolong the life of the regime, its external aggression and its domestic brutality.”

Senator Joe Lieberman, former Democratic senator from Connecticut, told a panel of experts discussing the book on December 15 in Washington: “…the written report … reminds us that the NCRI-US is not just an advocacy group, but it also has become a respected think tank, you might say, and even beyond that a kind of independent intelligence agency whose reports have attained credibility. And that’s really contributed to the effort to improve the lives of the people of Iran and also to make the region and the world, including the United States, safer from the threats represented by the current regime in Tehran. So, I thank … all who work … at NCRI-US.”

Mr. David Shedd, former Acting Director of the Defense Intelligence Agency, former Special Assistant to the President and Senior Director for Intelligence Programs and Reform, also addressed the Washington DC event, saying, “Serving as an intelligence officer, I also want to thank the NCRI. You are in essence an intelligence organization, collecting at great peril information inside a despotic environment in which you can quite literally say take no prisoners when it comes to collecting on the UAV program and many of the other aspects that you are engaged in. And then find a way to share this with the public and have that awareness created by the great work that you are doing in terms of sensitizing the world as it pertains to the activity of this despotic regime.”

Professor Matthew Kroenig, a Professor in the Department of Government and the Edmund A. Walsh School of Foreign Service at Georgetown University, Deputy Director, Scowcroft Center for Strategy and Security, and Director, Global Strategy Initiative, The Atlantic Council, said, “I have been focused on the Iranian nuclear challenge, in and out of government over the past 20 years. … I did want to begin by congratulating NCRI on this report. It’s really amazing, I think, over the past 20 years the kind of information NCRI has been able to provide on the Iranian regime’s activities, going back to some very foundational revelations on the nuclear program almost 20 years ago, and all the way to this report today. And if you haven’t read it yet, I would recommend that you do. It’s really remarkable the level of detail they get into in terms of Iranian drone production capability.”

Mr. Jonathan Ruhe, JINSA Director of Foreign Policy, said, “I would join my panelists in recommending the new book that’s been released today . As someone who’s been citing this issue for years, there just is a wealth of new information on the structure, roles, organization, capabilities of Iran’s growing drone program.”

The book concludes that despite and in part due to the concessions made through the nuclear deal and Western countries’ decision to turn a blind eye to the clerical regime’s destabilizing activities, the export of terrorism and incitement to war in the region remain pillars for the regime’s preservation, and have in fact gained prominence in the eyes of the ruling clerics who face daily mounting discontent and protests within Iran. Newly installed president Ebrahimi Raisi was indeed handpicked for the office by the regime’s supreme leader, Ali Khamenei, to confront the people’s demands with force and suppression. Iran’s population is increasingly defiant, as demonstrated in the series of nationwide protests ongoing since 2017. Protests were on the rise in 2021, including in Tehran, Sistan & Baluchestan, Khuzestan, Char Mahal & Bakhtiari, Isfahan, and many other provinces.

The protests have been met with a merciless crackdown, the flip side of which has been the export of terrorism and incitement to war. In fact, since the installation of Raisi, the destructive intervention of the Quds Force in the region has intensified, as have Tehran’s UAV attacks.

Raisi’s presidency should inevitably and finally shift the policy of the West, from decades of engagement and appeasement to a policy that places the Iranian people at the forefront. His selection and the ongoing protest movement should prompt the world to recognize the Iranian people’s right to determine their future and to establish a free, democratic, secular, and nonnuclear republic in Iran.