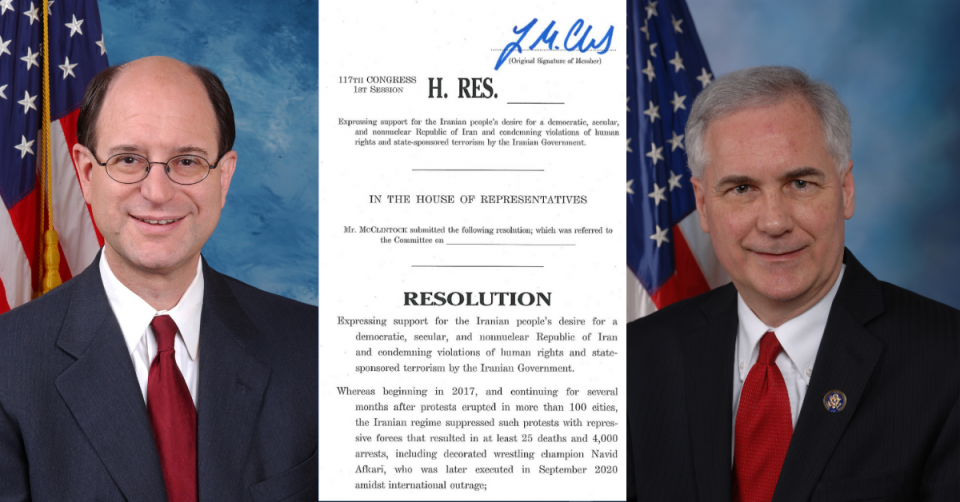 WASHINGTON, DC, February 12, 2021 — The US Representative Office of the National Council of Resistance of Iran (NCRI-US) welcomes the bipartisan U.S. House resolution, H.Res.118, “Expressing support for the Iranian people’s desire for a democratic, secular, and nonnuclear Republic of Iran and condemning violations of human rights and state-sponsored terrorism by the Iranian Government,” introduced by Congressmen Tom McClintock (R-CA) and Brad Sherman (D-CA). With 113 original sponsor and cosponsors from both sides of the aisle, the resolution was brought to the administration’s attention in a letter to President Biden, as it crafts its policy on Iran.

“This bi-partisan resolution comes at a very momentous juncture for the Iranian people’s movement for democracy and freedom. The ruling religious dictatorship is steadily weakening under the pressing weight of popular discontent, political infighting, systemic corruption, and international isolation,” said Soona Samsami, the U.S. Representative of the NCRI.

The Congressional initiative also comes just days after a Belgian court sentenced a senior Iranian diplomat, Assadollah Assadi, to 20 years in jail for masterminding a state-sanctioned plot to bomb the Iranian Resistance’s 2018 Free Iran summit near Paris. The gathering of 100,000 included several hundred current and former American and European dignitaries. Assadi’s “3 accomplices were given jail terms of 15 to 18 years and stripped of their Belgian citizenship,” the resolution highlighted.

“On June 30, 2018, tens of thousands of people gathered in Paris at the Free Iran gathering where they supported advocates for a democratic, secular, and non-nuclear Republic of Iran, and showed support for the opposition leader Mrs. Maryam Rajavi’s 10-point plan for the future of Iran, which calls for the universal right to vote, free elections, and a market economy, and advocates gender, religious, and ethnic equality, a foreign policy based on peaceful coexistence, and a nonnuclear Iran,” the resolution said. “Assadi took an Iranian-made bomb from Iran to Europe on a commercial flight, and delivered it to his accomplices with the aim of causing mass casualties at the Free Iran gathering in Paris in 2018,” the resolution notes.

The bipartisan initiative explains that the Belgian court found ‘‘that the four defendants are part of a larger terrorist group within a specific Iranian intelligence service. This appears from by the sums of money paid to the defendants, the way information was gathered, the meetings in Iran, the use of diplomatic status, and the making and testing of the explosive device in Iran itself.’’

Referring to the foiled 2018 terrorist truck bombing plot targeting the Iranian Resistance in Albania, also conspired by an Iranian embassy, the resolution recalls that “in December 2018, the Government of Albania expelled Iran’s Ambassador, Gholamhossein Mohammadnia, and MOIS station chief in Albania, Mostafa Roudaki, for planning terrorist activities against Iranian dissidents and members of the People’s Mojahedin Organization of Iran (PMOI/MEK). In January 2020, the Government of Albania expelled two other Iranian diplomats also for planning terrorist activities against the MEK.”

The People’s Mojahedin Organization of Iran (PMOI), also referred to as the Mujahedin-e Khalq (MEK), is Iran’s largest, most organized opposition group and principal member of the democratic coalition, the National Council of Resistance of Iran (NCRI). Having led the opposition to the mullahs since 1979, the MEK has been systemically targeted by the regime’s repression and terrorism apparatus.

Regarding two agents of Tehran’s intelligence ministry who were arrested by the United States government in August 2018, the resolution states that these two “had acted on behalf of the MOIS [Ministry of Intelligence and Security] to conduct covert surveillance in the United States against officials of the National Council of Resistance of Iran for a target package, which, according to the Department of Justice Federal complaint, may include ‘apprehension, recruitment, cyber exploitation, or capture/ kill operations’, and that they pleaded guilty and were sentenced to imprisonment.”

H.Res.118 “condemns past and present Iranian state-sponsored terrorist attacks against United States citizens and officials, as well as Iranian dissidents, including the Iranian regime’s terror plot against the ‘Free Iran 2018–the Alternative’ gathering in Paris.”

The bipartisan group of over 100 members “Stands with the people of Iran who are continuing to hold legitimate and peaceful protests against an oppressive and corrupt regime; and recognizes the rights of the Iranian people and their struggle to establish a democratic, secular, and nonnuclear Republic of Iran.”

The NCRI-US supports the resolution’s transatlantic call “on nations to prevent the malign activities of the Iranian regime’s diplomatic missions, with the goal of closing them down, including the Iranian Embassy in Albania.”

The NCRI-US also welcomes the resolution’s core premise that any effective and meaningful Iran policy, aiming to enjoy bi-partisan support from the U.S. Congress, should be based on recognition of the right of the Iranian people to liberty and their struggle to achieve a democratic, secular, and non-nuclear republic in Iran, a goal for which the NCRI has endeavored for four decades.

The National Council of Resistance of Iran (NCRI) is a democratic opposition coalition founded in 1981 in Tehran, as an alternative to the clerical regime. It will serve as a provisional government led by its President-elect Maryam Rajavi and based on her Ten Point Plan, once the theocracy is ousted. Its primary responsibility will then be to hold free and fair elections for a national and constituent assembly within six months after the fall of the regime, and to ensure the peaceful transition of power to the elected representatives of the Iranian people.