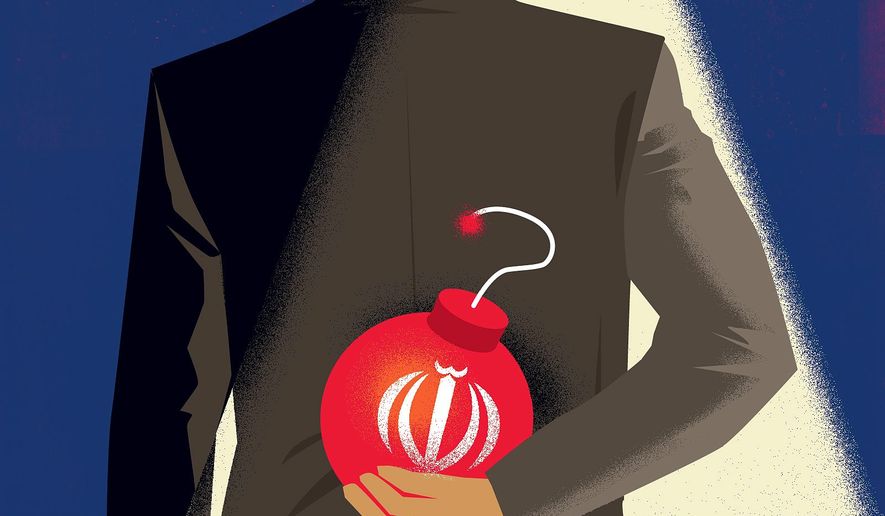 Shakespeare wrote in “The Merchant of Venice” that “The truth will out.” Last week, the truth did come out about the terrorist Iranian regime. For that, the world owes a debt of gratitude to the Belgian people and their law enforcement and judicial system.

A Belgian court ruled on Thursday that the regime’s foiled bombing of a public gathering in the outskirts of Paris in June 2018 was conducted by a senior diplomat and approved at the highest state levels. This marked the first time that a senior Tehran official has been put on trial for direct involvement in state-sponsored terrorism and it is a game changer.

Iranian diplomat, Assadollah Assadi, worked with three accomplices in an effort to achieve the objective set by the leaders of Iran, particularly the Ministry of intelligence and Security (MOIS). That objective was to bomb a major gathering hosted by the National Council of resistance in Iran (NCRI), Tehran’s main opposition movement. The rally was attended by thousands of individuals, including diplomats from multiple countries from around the world, including the United States. The main target was the NCRI’s President-elect Maryam Rajavi.

The NCRI is the largest, best organized, and most popular democratic alternative to the theocratic regime. Over the years, their advocacy for a peaceful, tolerant, democratic non-nuclear Iran has attracted greater internal and international support. That was evidenced by the incredible number of political representatives from countries around the world attending that 2018 event, all of whom were potential targets of the Iranian terrorist plot.

The regime directed one of its official diplomats to oversee this plot, collaborate with the accomplices, act as a courier for the explosives and coordinate the activity with the Iranian government. But, “the truth will out.”

The planned bombing was a state-sponsored plot. It is time for all freedom loving and civil nations around the world to take notice of the regime’s dangerous state-sponsored terrorism, which has been expanding in Europe. In fact, the Belgian investigations revealed that Assadi traveled to hundreds of regime “centers” in Europe, organizing and bankrolling terrorist sleeper cells and secret informants.

In his 2002 State of the Union speech, President George W. Bush condemned the Iranian regime for its aggressive pursuit of weapons of mass destruction. He described the leadership of the regime as “an unelected few seeking to repress the Iranian people’s hopes for freedom.”

The Iranian people certainly reflect those hopes today. They have grown stronger and stronger every year. For the past 20 years, the regime’s effort to suppress the truth and eliminate any efforts to bring democracy and freedom to Iran has been brutal and worthy of international condemnation. Still, the regime has failed to kill the Iranian people’s quest for freedom.

In light of the findings of the Belgian court on Feb. 4, the world, and particularly American allies, must remind themselves that Iran has continued to subsidize terror in the Middle East, support regional proxies in Syria and Iraq, imprison or murder democratic dissidents, advance its ballistic missile technology and accelerate its plutonium enrichment.

The planned bombing was an operation by a terrorist state that continues to operate with arrogance, impunity, and disdain for the human race, common decency, and basic norms of civil society. The European Union, the United States, and nations around the world must applaud the courage and diligence of the Belgian government, its judicial system and their citizens, and loudly and resoundingly condemn the terrorist actions of the Iranian government.

But rhetorical condemnation without further action will be of little impact on this rogue regime, which heretofore has been completely unwilling to change its behavior. Countries whose citizens were in harm’s way during the 2018 Free Iran rally should consider dramatically downgrading diplomatic relationships with Iran. And Tehran’s Ministry of Intelligence should be designated as a terrorist entity.

The regime should be held accountable worldwide, including its Foreign Minister Javad Zarif. The regime used the diplomatic pouch (to transfer explosives), the diplomatic corps, and its embassies for terrorist activity.

The regime should be condemned not only for this terrorist act, but its terror and repression over previous decades. These countries and their leaders should align themselves with the hopes of the Iranian people for freedom. As a specific policy orientation, the NCRI should be recognized as the alternative to the existing regime. That is the ultimate condemnation of their terrorism.

• Tom Ridge was the nation’s first Homeland Security secretary and governor of Pennsylvania.