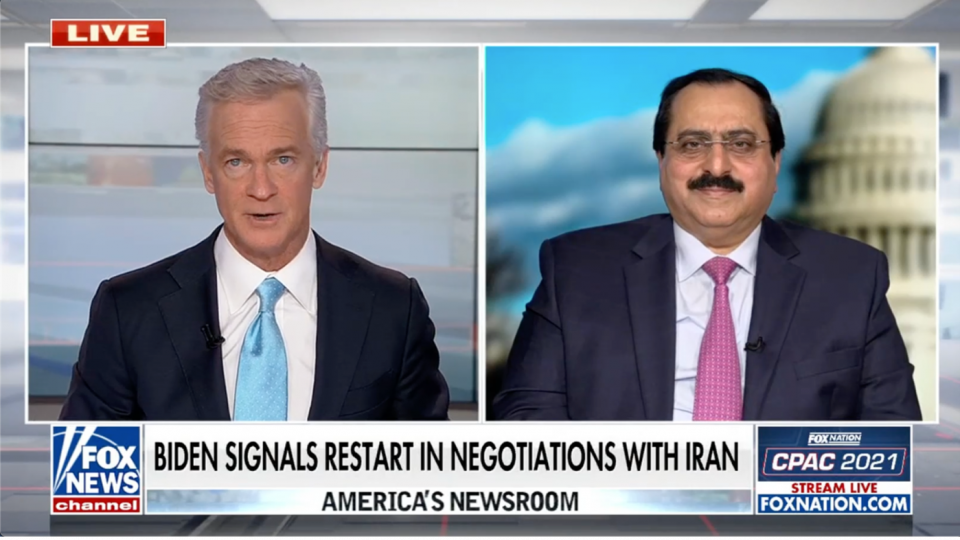 White House Press Secretary, Jen Psaki (tape): The president has been clear that if Iran comes back into full compliance with its obligations, we will do the same, and of course then use that as a platform to build a longer and stronger agreement, including addressing ballistic missiles. And many of the concerns that as you noted countries in the region our European partners have about the actions of Iran, but we are not at that point.

Trace Gallagher: Well, there you have White House, press secretary, Jen Psaki saying the Biden administration is prepared to start negotiations with Iran on restarting the 2015 nuclear deal. But after years of a successful hard line against them is now the time to warm up to the Iranian regime? Alireza Jafarzadeh is the deputy director at the National Council of Resistance of Iran, U.S. Representative Office. He joins me now. It’s great to see you, sir. You know, I just want to play this because this is the former CIA director, James Woolsey, talking about Iran. I’ll get your thoughts on the other side.

Hon. James Woolsey (tape): It doesn’t help to keep an eye on Iran. They lie cheat and steal all the time. That’s the way they operate. Sometimes, you can do a deal with a country, but I think Iran is not an example of that capability.

Trace Gallagher: It’s not breaking news, Alireza, that Iran lies cheats and steals. We have the evidence to support that.

Alireza Jafarzadeh: Absolutely right, Trace. The Iranian regime has been cheating and lying and deceiving everybody when it comes to its nuclear weapons program. But the nuclear weapons program is not the only problem the world has with this regime. This is the regime that remains to be the world’s leading state sponsor of terrorism. You’re talking about evidence; just earlier this month, a Belgian court convicted an Iranian diplomat, a sitting diplomat, for involvement in terrorism. He’s the one who brought a bomb from Iran on a diplomatic pouch on a commercial flight, delivered it to two other culprits to detonate it at the huge rally of Iranian opposition in Paris in summer of 2018. He was sentenced to 20 years of imprisonment. Seven other Iranian regime’s diplomats were expelled by European nations, including France, for involvement in terrorism and Javad Zarif–the foreign minister–who is the smiling face of the Ayatollahs, his embassies are hubs for terrorism. This is the nature of the regime that anyone who wants to deal with the Ayatollahs has to keep in mind.

Trace Gallagher: Israeli prime minister, Benjamin Netanyahu thinks that this is the bottom line. It leads to one thing. It leads to Iran getting a nuclear weapon. Is that a fair assessment or a little bit of hyperbole?

Alireza Jafarzadeh: Well, of course the Iranian regime definitely wants to get the bomb. Why? Because that’s the tool for their survival. This regime, as we speak, is very, very weak and vulnerable. It’s isolated in the region, both by the Muslim and Arab nations, but also inside Iran. This regime is facing tremendous trouble. Over the past three years, there were several rounds of major uprisings against the regime in all 31 provinces of Iran. Actually just earlier this week, in Saravan, which is in Southeast of Iran, protests have been going on. The regime has killed 40 people, injured a hundred people just in the past two days. So, this is a weak regime, but what they want to do, they want to portray themselves as though they are in driver’s seat and they’re threatening everybody else to gain concessions and lift the sanctions without changing their behavior.

Trace Gallagher: Alireza, I want to get your thoughts on, you know, John Kerry, the talks he had meetings with the Iranian foreign secretary during the Trump administration. Is it different than what Michael Flynn did with the Russians that he actually was convicted for? I mean, what are your final thoughts on that? I just want to leave you with this General Jack Keane says it was reckless and significantly irresponsible. I’m not going to read the whole thing, but you see there, you know, saying that he emphasized that the enemy, because that is who Iran really is in the past 40 years, no nation state that has killed more Americans than Iran. 15 seconds for final thoughts, Alireza.

Alireza Jafarzadeh: In 15 seconds. Anyone, whether you’re in the administration or you’re outside of the administration, when you deal with the Iranian regime, you have to keep in mind, the ayatollahs will cheat you, will coerce you, will lie to you, will play you, and will use you. That’s what the Iranian regime has been doing with the international community, whether governments or private sectors, they have their own lobby right here who are just repeating Javad Zarif’s talking points. You need to stop in all of those things and hold the regime accountable for its own behavior.

Trace Gallagher: Alireza Jafarzadeh good to see you, sir, as always. Thank you.