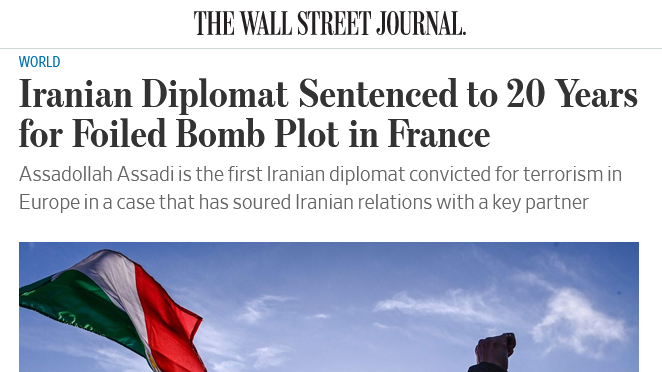 While working on terrorism-related issues during my congressional career, I soon understood not only that Iran had earned its reputation as the world’s leading state sponsor of terrorism, but also that the country’s leadership considered terrorism a viable replacement for standard political and diplomatic statecraft. A recent criminal court ruling in Belgium reinforces this fact.

Since the time of the 1979 revolution, the use of proxies in terror operations abroad afforded the regime some measure of plausible deniability and made it more difficult for the U.S. or its allies to hold Iranian officials directly accountable. Still, it was shocking when all such officials, including the regime’s representatives to foreign nations, evaded that accountability for nearly four entire decades. That streak was mainly attributable to the conciliatory Western policies.

The impunity lasted until the summer of 2018, when German authorities arrested Assadollah Assadi, a top Vienna-based Iranian diplomat, on terrorism charges. Days before his arrest, Assadi was being monitored by multi-national law enforcement authorities when he met with an Iranian-Belgian couple in Luxembourg. There, he handed off an explosive device that he had personally smuggled into Europe from Iran while traveling on a diplomatic passport. Assadi gave his co-conspirators explicit instructions on how to explode the bomb at the June 30 Free Iran rally, organized near Paris by the National Council of Resistance of Iran (NCRI), and to specifically target the event’s keynote speaker, NCRI President-elect Maryam Rajavi.

The Belgian authorities arrested the couple on their way to Paris carrying the bomb. The horrific terror plot was foiled. The Belgian judiciary made the decision to pursue Assadi’s extradition from Germany and then prosecute him. He became the first Iranian official to face charges in Europe for terrorism.

Assadi’s trial was held late last year in Antwerp and the Criminal court on February 4 issued its historic ruling, sentencing Assadi and the mastermind and “operational leader” of the plot, to 20 years in jail and his three Iranian-Belgian accomplices, Nasimeh Naami to 18 years, Amir Saadouni, Naami’s husband, to 15 years, and Mehrdad Arefani to 17 years imprisonment.

The failure of Assadi’s plot, however, is no reason for the U.S. or its allies to consider the matter closed or to downplay the need for broader accountability. The 2018 bomb plot is part of a much larger pattern of behavior aimed at targeting the main Iranian opposition coalition, the NCRI and its principal component, the Mujahedin-e Khalq (MEK), for which the regime has so far escaped accountability. In March 2018, a similar failed terror plot was targeting some 2,500 MEK members in their center, Ashraf, in the Balkan nation of Albania. Albania righteously and courageously expelled four Iranian diplomats, including the regime’s ambassador, for plotting terror.

Since 2018, in addition to Assadi’s conviction, seven Iranian diplomats have been expelled by European nations for such terror plots.

I have attended similar events, organized by the Iranian opposition both in Paris and in Albania and have witnessed the magnitude of the crowd, as well as the presence of prominent American, European and Middle Eastern officials, parliamentarians, and dignitaries, who could have fallen victim had these plots succeeded.

I am pleased to report that at least 120 current members of the House of Representatives recently joined in co-sponsoring a bi-partisan resolution, H.Res. 118 that condemns past and present acts of Iran-backed terrorism – most notably the plot to bomb the 2018 Paris Free Iran rally, recognizes the underlying breaches of diplomatic privileges, and endorses the expulsion of diplomats who may come under suspicion of playing a terrorist role akin to Assadi’s.

Other such operatives are certainly present on European soil. The investigation into Assadi’s activities found that he had contact with hundreds of assets across at least 11 European countries. Investigations into this network must continue, and they must broaden to look at other Iranian embassies, cultural institutions, and commercial entities, including in the United States, any of which could be harboring sleeper cells as part of a growing infiltration agenda. In 2018, FBI arrested two Iranian agents for spying and plotting against NCRI officials in the United States.

Tehran’s systemic use of diplomatic corps should have been obvious all along to anyone who has been paying attention to the Iranian regime’s commitment to using terrorism as a form of statecraft. In the wake of the Assadi conviction, it should be impossible to ignore this feature. The Belgian court explicitly determined that the 2018 plot had been “developed in the name of Iran at the request of its leadership.” Now it falls to the U.S. to lead the way in demanding accountability for it and all players involved in planning, facilitating and executing the plot. Supreme Leader Ali Khamenei tops the list.

Judge Ted Poe represented 2nd district of Texas in the U.S. House of Representatives from 2005 to 2019, and is the former chairman of the Subcommittee on Terrorism, Nonproliferation, and Trade in the House Foreign Affairs Committee.