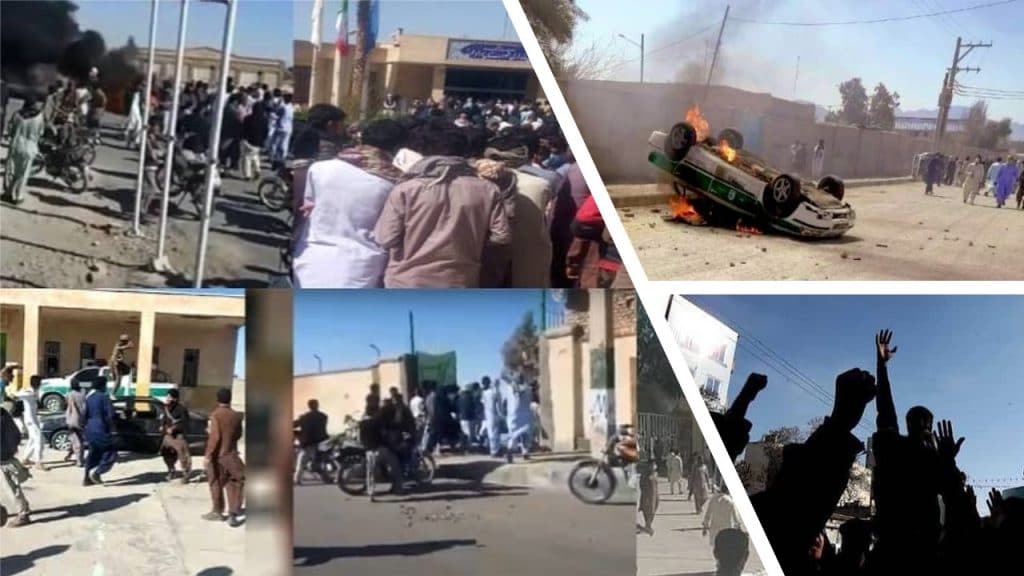 On February 22, 2021, Iran regime’s Revolutionary Guard Corps (IRGC) killed nine Baluchi fuel porters and injured dozens more near the city of Saravan, sparking protests across Sistan and Baluchestan Province. Many locals, forced into poverty in the crumbling economy of the mullahs’ regime, have resorted to small-time fuel smuggling in order to feed themselves and their families. In an effort to “clamp down” on the trafficking, the IRGC dug ditches to prevent the fuel porters from crossing the border. When faced with a group of impoverished protesting porters, the IRGC opened automatic machinegun fire.

The regime persists in pedaling a narrative of “reasonable government push-back” against fuel smuggling. This narrative is severely undercut, however, by the regime’s own ongoing smuggling activities and mafia-style gang ties. According to Ehsan Hooshmand, a regime analyst, “In the smuggling operations of mafia gangs, 100 trucks cross the border with official warrants.” According to Hooshmand, the regime’s smuggling gangs smuggle 10-15 million liters of fuel every day, the value of which is so great that “if 50 percent of it is curtailed, it would give the county’s economy a yearly $6 billion boost.”

In response to the killings, citizens from cities across Sistan and Baluchestan Province held rallies and protests the following day, February 23. The demonstrations congregated around the Saravan governorate building. Once again, the IRGC opened fire on the unarmed protesters, bringing the total number of those slaughtered to 40 civilians and wounding an additional 100 people. Despite the violence, protesters were able to bravely force the heavily armed IRGC out of the building and surrounding bunkers with only their bare hands and stones.

The brutal regime has since placed Sistan and Baluchestan under lockdown and security forces are on full alert. Furthermore, the regime is depriving the Razi Hospital in Saravan of critical supplies and blocking the injured from seeking any form of medical attention. To prevent any reports of the protests or the heinous attacks by government forces against unarmed civilians, the regime has effectively shut down internet access by blocking the mobile data network across Sistan and Baluchestan, a province where 96% of the population accesses the internet through their phones. Speaking to the Associated Press, Amir Rashidi from Miaan Group, a human rights organization that focuses on digital security in the Middle East, stated that the internet restrictions were a “traditional response to any kind of protest,” and that “shutting down the internet to block news and pictures getting out makes (authorities) feel more comfortable opening fire.”

The U.S. State Department highlighted on February 25th the “Deeply concerning reports of internet outages and government violence against fuel carriers and protestors in Iran’s Sistan & Baluchestan province,” and called “upon Iran to uphold its commitments to human rights and fundamental freedoms, including freedom of expression and peaceful assembly.”

“Iran’s Revolutionary Guards unlawfully used lethal force against unarmed fuel porters near the city of Saravan, in Sistan and Baluchestan province, on 22 February, flagrantly violating the absolute prohibition on the arbitrary deprivation of the right to life under international law,” said Amnesty International on March 2, 2021.

“Given the systematic impunity prevailing in Iran for serious human rights violations and other crimes under international law, Amnesty International urges members of the international community to push for truth and justice for the grave violations of the right to life committed by Iran’s security forces on 22 February,” AI said.

The uprisings in Saravan are only the latest calls for justice in Iran.  The regime has continued a brutal “whack-a-mole” campaign against dissent and popular uprisings, most notably since 2018. Despite the snowballing call for change, the regime has failed to alter its behavior accordingly. As Shahriar Mandanipour, a regime-linked political analyst, warned in December, “[Government-led] rent-seeking activities; unbridled inflation; the lavish lifestyle of the children of officials; corruption and embezzlement; the gradual dissipation of the middle class; poverty and the deep gap between the poor and the wealthy; and the existence of stunning palaces next to slums; all of these have brought the tolerance of the impoverished citizens to its lowest level.”

As events in Saravan continue to unfold, the protests appear to fit within a greater paradigm of instability and social unrest, begging the question, how much longer can the mullahs’ regime last? Once more, the international community must be reminded that the mullahs’ barbaric regime has no interest in the rights or security of its citizens. A realistic policy toward Tehran must, in addition to holding accountable its irredeemable rulers, recognize the cries for change from Iran’s oppressed people.