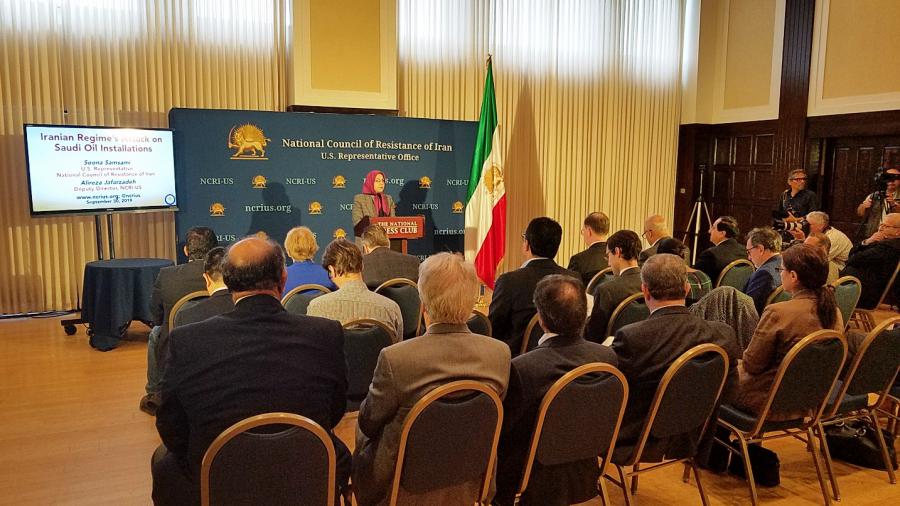 WASHINGTON, DC, October 3, 2019 — The Iranian regime was behind recent attacks on Saudi oil facilities, Iran’s main opposition has revealed. Based on intelligence obtained from inside the regime by the network of Mujahedin-e Khalq (MEK), the National Council of Resistance of Iran (NCRI) has divulged that the regime’s top leadership and its Islamic Revolutionary Guard Corps (IRGC) were directly involved in the attack. MEK is the pivotal member organization of the NCRI coalition.

At a press conference in the National Press Club in Washington, DC, on September 30, 2019, the NCRI representatives shared details of the Sept. 14 attack, including the decision-making process, the type of missiles used, the names of IRGC’s operational commanders, and the locations associated with the operation’s command inside Iran.

NCRI said the simultaneous missile and drone attack was a blatant act of war ordered by the regime’s supreme leader Ali Khamenei and approved by his President Hassan Rouhani and key officials, including Foreign Minister Javad Zarif.

The intelligence reports presented at the press conference by the NCRI-US deputy director, Alireza Jafarzadeh, indicate that:

• The main decision-making body was the Supreme National Security Council (SNSC), which convened on July 31, 2019, presided by Rouhani, and approved the plan for the attack ordered by Supreme Leader Khamenei. Javad Zarif is a member of the SNSC.

• Khamenei directly gave the go-ahead orders to the IRGC commanders in charge of the operation, MGen Rashid and BGen Hajizadeh. BGen Mohammad Fallah, Hajizade’s deputy, took the lead to operationalize the attack plan.

• The IRGC’s tactical operational command HQ was deployed from Tehran to Omidiyeh base, 85 km southeast of the city of Ahvaz in Khuzestan province (southwest Iran), a week prior to the attack.

• A team of missile and drone experts from the IRGC’s 3rd Naval Region in city of Mahshahr (119 km south of Ahvaz) was also deployed at the Omidiyeh base.

• The IRGC’s Aerospace Force’s missiles & drone units carried out the Sept. 14 attack. ‘Ya-Ali’ cruise missiles, manufactured by the IRGC’s Thamen Industries situated in Parchin military complex near Tehran, was used in the attack.

• A new squad from the IRGC aerospace force from Tehran has entered Omidiyeh base on September 22, 2019. There is no information on their orders yet.

The NCRI also provided information about nine missile centers and secret stockpiling sites of the missiles located in the southern coastal provinces. Among them, the Fajr 5 tunnel is one of the most important secret facilities of the IRGC navy for the missile production and stockpiling. Fajr 5 is situated in Beheshti base in the Beiza region, north of Shiraz in Fars province. The base houses a tunnel complex and adjoining facilities for the production and stockpiling of the IRGC’s missiles.

At the Sept. 30 press conference, the NCRI U.S. Representative Ms. Soona Samsami said: “This regime is counting on inaction of the international community in the face of its aggression.” The regime embarked on its latest aggression because it “has no strategic exit from an inevitable downfall,” it “tries to prop itself up and prevent a popular uprising by using internal suppression and external sponsorship of terrorism,” she added.

“Our intelligence shows that the regime’s calculus is that it would not pay a heavy price for its aggression up until the US presidential elections in 2020. When the regime’s attacks on oil tankers, oil facilities, the downing of an American drone, and then its increase in uranium enrichment and the spinning of IR5 and IR6 centrifuges didn’t receive an appropriate response, the regime became even more emboldened and subsequently embarked on a blatant act of war on Saudi soil,” Ms. Samsami told the conference.

In closing remarks, the NCRI called for the reinstatement of previous UN Security Council resolutions on the regime’s nuclear weapons project. It also said the regime and the IRGC mercenaries must be expelled from the rest of the region. And finally, the world community must recognize the right of the Iranian people’s Resistance to overthrow the ruling theocracy and attain freedom.