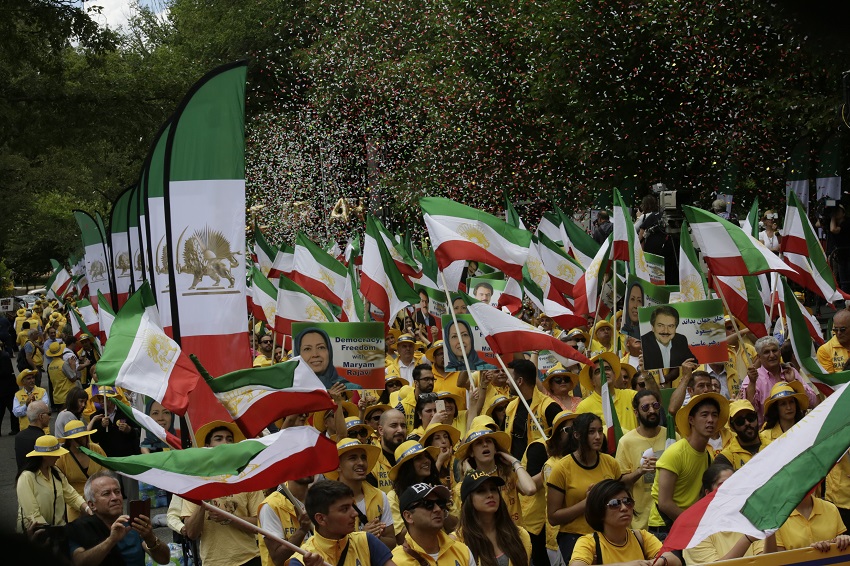 THE FOLLOWING IS A REBUTTAL TO AN ARTICLE BY THE NBC NEWS ON OCTOBER 17, 2019, REPLETE WITH BASELESS AND THREADBARE ALLEGATIONS AGAINST THE MUJAHEDIN-E KHALQ (PMOI/MEK) AND THE SUPPORT IT HAS ENJOYED OVER THE YEARS AMONG PROMINENT FORMER SENIOR U.S. OFFICIALS.

The article (NBC, October 17, 2019) is the latest in a series of pieces that have rehashed stale and universally debunked allegations against the main Iranian opposition Mujahedin-e Khalq (MEK). Any fair-minded person can effortlessly discover that the main source of these allegations is the religious fascism ruling Iran.

Regrettably, NBC has refused to publish the MEK’s rebuttals to such false allegations in the past. To set the record straight, the following points need to be reiterated.For the past 40 years, the MEK has proudly waged a campaign for democracy against the foremost state sponsor of terrorism in the world, for which it has been the victim of false allegations by advocates of appeasement in the US, such as Daniel Benjamin. Unable to openly defend the religious dictatorship in Iran, these apologists instead demonize the regime’s democratic alternative to justify appeasing the current regime.

This is not the first time that NBC has quoted Daniel Benjamin, a former State Department official and the MEK’s chief antagonist in its legal challenge to the terrorist designation seven years ago. After French, German and Belgian law enforcement agencies foiled a terror plot by the Iranian regime’s terrorists, including a senior diplomat, to bomb the Iranian Resistance’s gathering in Paris on June 2018, while parroting the regime Foreign Minister Javad Zarif, NBC reported that this may have been a false flag operation and that the regime may not have been involved. It also quoted Benjamin as saying, “There are no simple stories in this patch.” Ignoring that a senior so-called diplomat of the regime had been arrested in this terrorist operation, Benjamin tried to shift the blame from the entirety of the regime by suggesting that the plot could have been a “rogue operation.” A few weeks later, the French government and subsequently the European Union declared that the highest levels of the Iranian Intelligence Ministry had been involved in the plot and placed the Ministry’s Internal Security Directorate and a senior official on their terrorist lists for their role. However, NBC never corrected its story nor did Benjamin retract his comments. This leaves no doubt regarding NBC’s biased coverage on this topic.

On October 17, the State Department chronicled the Iranian regime’s malign activities during nuclear negotiations and even after the signing of the nuclear agreement. The release states: “During the period of JCPOA negotiations, Iran continued to provide arms, financing, training, and the facilitation of Shia fighters to the Assad regime” in Syria. It goes on to say: “On September 1, 2013, an attack by Iranian proxies Kata’ib Hezbollah (KH) and Asa’ib Ahl al-Haq (AAH) on Camp Ashraf in Iraq, led to the deaths of 50 members of the Mujahedeen-e Khalq, or MEK.  Press reports claim members of the QF not only planned the attack but also played a direct combat role in it. The QF, along with KH and AAH members, also abducted seven MEK members and smuggled them back to Iran, according to the press.  The missing seven members haven’t been seen or heard from since the attack.”

The dozens of honorable and bipartisan American figures who support the MEK and the Iranian Resistance represent the conscience of humanity against the evils of the theocratic rulers of Iran. Targeting these personalities, including America’s Mayor Rudy Giuliani and Attorney General Michael Mukasey, who have distinguished careers, is part of the clerical regime’s vilification campaign against the MEK, which is sadly echoed by supporters of appeasement vis-a-vis the regime like Daniel Benjamin. The latter’s hostility towards the MEK is matched by that of the religious tyrants in Iran – no doubt due to the resounding defeat he suffered when trying to prevent the removal of the unjust terrorist designation against the MEK. When he worked as the State Department’s Counterterrorism official, he inexplicably refused to implement the July 2010 orders of America’s second-highest court, the Court of Appeals for the District of Columbia. The writ of mandamus on June 1, 2012, compelled the Secretary of State to delist the MEK in four months. Having no other options, the Secretary delisted the MEK on September 28, 2012, in the final days of the Court-mandated period.

The pathetic claims that the MEK has no popular base in Iran are too outlandish to deserve a response. It is unclear which scientific poll the author of the article and Benjamin rely on to make such a claim with respect to a country that is the record holder of per capita executions in the world. The MEK is a movement that has been fighting against two dictatorships for 54 years. More than 100,000 of its members and sympathizers have been executed. It continues to confront terrorism, all sorts of regional and international deals, and dedicated regime apologists like Benjamin. Such a movement could not have survived, much less continuously expand, for more than five decades without an extensive popular base. Why would an organization that lacks social support become the clerical regime’s main existential problem? The reason the unqualified minds of the likes of Benjamin describe the MEK’s financial sources as a “big question” and “mysterious” is that they intentionally reject the support of the people of Iran for the MEK, which supplies their funding.

The Islamic-Marxist label against the MEK is an accusation concocted by the Shah and later borrowed by the mullahs in a bid to stop the growing popularity of the MEK. The same goes for the false accusations of a “bloody past” and murder of American citizens in the 1970s, which have all been tested and failed in dozens of court sessions in the US, Europe, and the UK. The MEK’s delisting was the result of judicial rulings, not favors curried from this or that politician, nor an act of charity by any government.

Hours after the publication of the NBC article, the clerical regime’s state-run media outlets, including the Fars news agency tied to the Islamic Revolutionary Guard Corps (IRGC), embraced it and translated it into Farsi. Serving the godfather of terrorism and arming it with more fodder to suppress the Iranian people and the Iranian Resistance is utterly shameful.