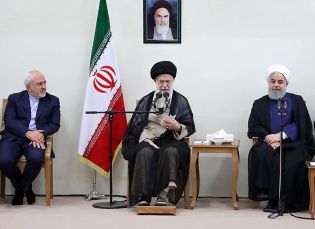 (CNSNews.com) – The September 14 cruise missile and drone attack on Saudi oil infrastructure was ordered by Iran’s supreme leader and approved at a meeting in July attended by Iran’s president, foreign minister, and commanders of IRGC divisions including the notorious Qods Force, an exiled Iranian opposition group alleged Monday, citing sources inside the regime.

In a new report released at the National Press Club, the National Council of Resistance of Iran (NCRI) said the attack was launched from the Omideyeh air base, near Ahvaz in southwestern Iran.

According to Saudi authorities, missiles struck the Aramco oil processing plant in Abqaiq, and the Khurais oilfield came under drone attack in the predawn strike. Half of Saudi Arabia’s oil production was suspended as a result.

The Trump administration has accused Iran of responsibility, and last week the British, French and German governments backed that assessment, saying there was “no other plausible explanation.”

The NCRI and its Mujahideen-e Khalq (MEK) affiliate boast a network of sources inside the Iranian regime and armed forces, and has over the years exposed its workings in a number of areas – most significantly when it provided key intelligence in 2002 on a nuclear program that Tehran had hidden from the international community for two decades.

Its new report says that supreme leader Ayatollah Ali Khamenei gave the direct order for the attack on the Saudi facilities, and the plan was approved at a July 31 Supreme National Security Council meeting presided over by President Hassan Rouhani.

The report said IRGC commanders and personnel with missile and drone expertise were relocated to the Omideyeh base, from where the strike was launched. The “Ya-Ali” cruise missiles used, it said, were manufactured in the Parchin military complex southeast of Tehran.

Following the attack, the report said, the operational personnel reported back in detail to Rashid.

(It also said that according to fresh reports, a new IRGC Air Force squad had been deployed to Omideyeh on September 22 – that is, a week after the Saudi attack. “There is no information on their orders yet.”)

Reading from the report Alireza Jafarzadeh, deputy director of the NCRI’s U.S. office, told the briefing that the attack “emanated from inside Iran, and was a blatant act of war that Khamenei, Rouhani, Zarif and other regime heads were responsible for in deciding, approving and implementing.”

“The regime is counting on inaction of the international community in its aggression,” the report concluded. “As long as this regime exists, it will not cease its aggression.”

The NCRI made a number of recommendations, including a call for the European Union to place Khamenei, the IRGC and Iran’s intelligence ministry onto its terrorism watchlist.

It also said previous U.N. Security Council resolutions on Iran’s nuclear weapons activities – which were lifted after the Iran nuclear deal was negotiated – should be reinstated.

‘A vile and cowardly regime’

The regime in Iran has repeatedly denied that it carried out the attack on the Saudi oilfield and oil processing plant. Its Houthi allies in Yemen, fighting against a Saudi-led coalition, claimed responsibility for the attack, and Tehran says that claim should be taken at face value.

Rouhani told reporters at the U.N. last Thursday that people accusing Iran of responsibility for the attack should come up with evidence to back their charges.

“Yemen has used its right to defend against the Saudi aggression, why should Iran be accused?” he asked. Rouhani also claimed that when he met with European leaders in New York they confessed to having no evidence of Iranian responsibility for the attack.

“It is a vile and cowardly regime, which hides behind its affiliated militias, pushing them to claim responsibility for” the attacks on Saudi oil infrastructure, he said.

“We have known that regime for 40 years. It is good at nothing but masterminding explosions, destruction and assassinations, not only in our region but also throughout the world.”

Al-Assaf said the international community has a “moral and historic responsibility to take a firm and united position: Utmost pressure with every tool available should be applied to end the terrorist and aggressive conduct of the Iranian regime.”

Saudi Crown Prince Mohammed bin Salman, in an interview on CBS’ 60 Minutes on Sunday, warned that if the international community does not deter Iran, “oil supplies will be disrupted and oil prices will jump to unimaginably high numbers that we haven’t seen in our lifetimes.

Asked whether the response had to be a military one, he replied, “I hope not,” adding that a “political and peaceful solution is much better than the military one.”