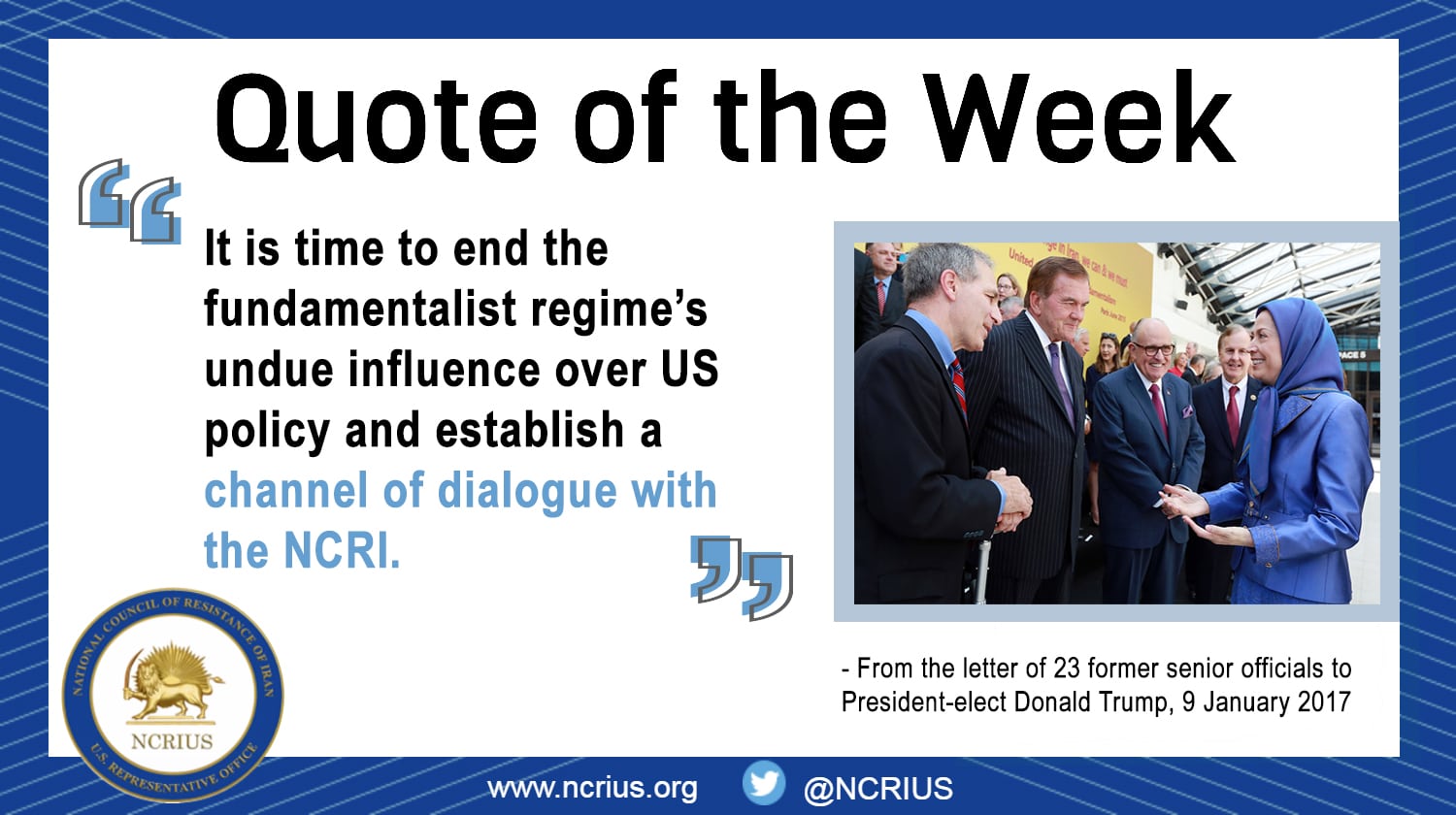 A bipartisan group of former top U.S. officials is calling on Donald Trump to establish a dialogue with Iranian exiles to counter the deal Obama made with Iran.

In a three-page letter to the president-elect, the officials called on him to begin dealing with the Paris-based National Council of Resistance of Iran (NCRI) and its main component the Mujahedeen-e Khalq (MEK), which have been the premier voices of opposition to the Tehran regime since 1979.

“We believe that a clearer reflection of U.S. interests and principles must now shape our policy toward Iran,” they wrote. “With a more enlightened grasp of the Iranian’s regime’s priorities and vulnerabilities, your administration will be equipped to exert leverage enabling the U.S. to oppose Tehran’s repression and adventurism, while standing for the fundamental values both our people’s share.”

Their letter freely noted that the NCRI and the MEK were listed as “terrorist organizations” by the U.S. from 1997-2012. That designation was finally revoked, with the State Department citing “the lack of confirmed acts of terrorism by the group for more than a decade.”

That designation, they wrote, had little to do with actual evidence of terrorism but instead “were diplomatic gestures taken at the request of Tehran. Iran’s ministry of Intelligence and Security has for many years impaired the exiled opposition by spreading false and distorted claims through third parties in the West.”

The officials pointed to the 10-point plan for the future of Iran offered by the NCRI’s President-elect Maryam Rajavi, which advocates universal suffrage, gender, and religious equality, abolition of death penalty, an end to Shariah and the separation of religion and state as well as a non-nuclear Iran.

Getting input from the Iranian exile community, the officials insist, would give the U.S. more accurate intelligence on international hot-spots than they are getting now.

They note that ISIS’ rise was “abetted by [Syrian strongman] Assad, Iran’s Revolutionary Guards led by its elite QODs force, and Iraq’s then-Prime Minister Maliki to divert international focus from achieving a negotiated transition of power in Damascus which could have ended the civil war and the exodus of refugees to neighboring states, Europe and North America.”

Regarding the nuclear treaty with Iran, the officials wrote Trump that “President Obama expressed the hope that nuclear negotiations would induce Iran’s leadership to act with greater consideration of American interests. It is now clear that Iran’s leaders have shown no interest in reciprocating the U.S. overture beyond the terms of JCPOA (Joint Comprehensive Program of Action) which gained them significant rewards.

Why Rafsanjani's Death Offers the US a Unique Opportunity to Reshape Its Iran Policy
Comment
Prominent Bipartisan Group to Trump: We Need a ‘Revised’ Iran Policy