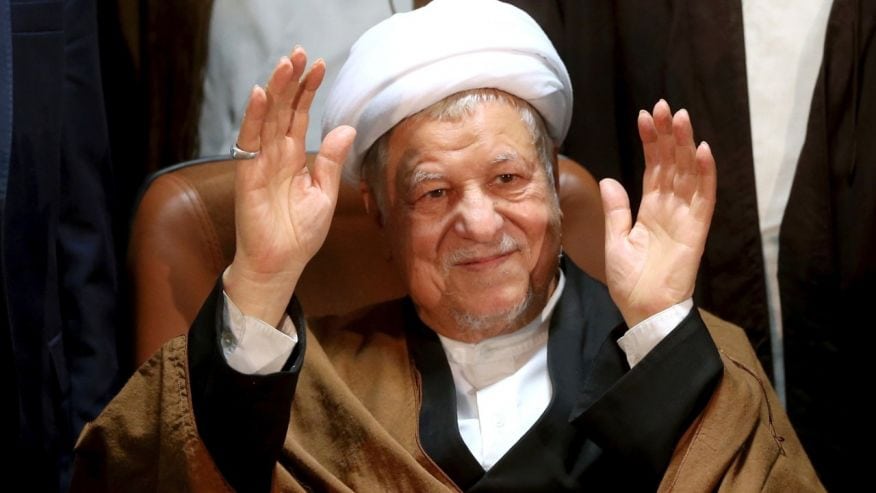 Ali Akbar Hashemi Rafsanjani, one of the founding fathers of the Iranian regime, died last week on January 8. He served as President, Speaker of Parliament, Deputy Commander of the Armed Forces, head of the Assembly of Experts–the 88-member body of clerics tasked with nominating the Supreme Leader, and head of the Expediency Council, a body adjudicating disputes over legislation between the parliament and the Guardian Council.

A defining chapter for the regime has now come to an end and a new uncertain chapter has opened.

Rafsanjani, one of the two pillars of the ruling theocracy, had always been the regime’s number two, acted as its balancing factor and played a decisive role in its preservation.

Rafsanjani’s death presents a historic moment for the incoming U.S. administration to adopt a more effective policy that strategically curbs Iran’s multi-faceted terrorist and nuclear threats and the suppression of its own citizens.

Though portrayed by some in the West as a “pragmatist” or “moderate,” during his long career of nearly 40 years, Rafsanjani was responsible for suppression at home, terrorism abroad, and the regime’s quest for nuclear weapons.

The Iranian clandestine nuclear weapons program jump-started and moved forward under Rafsanjani and he intensified cooperation with countries like North Korea.

In an interview published by the regime’s official state news agency IRNA on October 27, 2015, Rafsanjani acknowledged that during his time as Parliament Speaker and President, both he and Supreme Leader Ali Khamenei sought ways to obtain a nuclear bomb.

“Our basic doctrine was always a peaceful nuclear application, but it never left our mind that if one day we should be threatened and it was imperative, we should be able to go down the other path,” Rafsanjani said.

Rafsanjani was an ardent supporter of the theocracy’s most fundamental principles and strategic policies. In that respect, he embodied no worthy divergences with the supreme leader Ali Khamenei.

A quarter century ago, Rafsanjani exclaimed with unfailing conviction at every turn that “in all affairs, the pivotal role of the velayat-e faqih (supreme leader) must be accepted as fundamental.”

He even coined phrases like “the pole holding up the regime’s tent” to explain the pivotal role of Khamenei. Without it, everything would crumble, which means that the velayat-e faqih must be preserved at any cost.

He was not a reformer, just as his protégée, current president Hassan Rouhani is not.

During his presidency, tens of thousands of political prisoners were massacred in summer 1988. In 1994, the Jewish community center building in Buenos Aires was bombed, resulting in 85 deaths. Argentina then issued an arrest warrant for Rafsanjani, accusing him of personally ordering the attack.

The FBI concluded that Tehran masterminded the bombing of Khobar Towers in Saudi Arabia in 1996, resulting in the deaths of 19 American servicemen.

In 1997, a Berlin court ruled that a secret committee, made up of Khamenei, Rafsanjani, and several of his ministers, had ordered the 1992 assassinations of Kurdish dissidents at a Berlin restaurant.

In a sharp departure from the previous administrations’ search for the unicorn of “moderates” in Iran, the incoming Trump administration must lead an international effort to further contain, isolate and pressure the world’s largest state-sponsor of terror by adopting a principled and firm policy towards the murderous rulers of Tehran, while reaching out to the Iranian people and their organized opposition who seek a secular, democratic and non-nuclear republic in Iran.

Alireza Jafarzadeh, the deputy director of the Washington office of the National Council of Resistance of Iran, is credited with exposing Iranian nuclear sites in Natanz and Arak in 2002, triggering International Atomic Energy Agency inspections. He is the author of “The Iran Threat” (Palgrave MacMillan: 2008). His email is Jafarzadeh@ncrius.org.