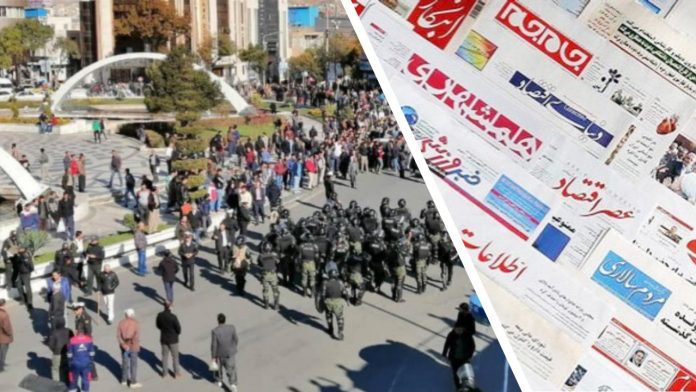 Iran’s state-run media are warning officials of social turmoil due to the increasing economic and social crisis.

On Sunday, the government approved a plan, raising workers’ salaries to 3.9 million tomans. While some officials bragged about this salary raise, state-run media acknowledged that workers’ new salary rate is far below the poverty line.

“Even though this increase in wages is more than in previous years, it still has a significant distance from the real inflation in the country. It is not clear what is happening to the working class of society these days,” wrote the state-run Aftab-e Yazd daily on Monday.

“People’s income has reached its lowest point due to the Covid-19 outbreak and the economic events. People are going through difficult conditions. Economic pressures such as rampant inflation, declining incomes, declining purchasing power and rising poverty on the one hand, and the costs of coronavirus outbreaks on the other, have created many challenges for them,” wrote the state-run Sobh-e Emrooz daily on Monday.

Instead of acting, the regime’s officials either blame international sanctions for Iran’s economic crisis or only complain about the situation.

“Recently, we hear these words from many officials: Expensiveness is rampant. Officials should be held accountable. If the officials want to evade responsibility as soon as they are asked, they should leave their positions and protest as people do. It’s wrong. This is our problem, and everyone must be held accountable in their position,” wrote the state-run Eghtesad Pouya daily on Monday.

“This inefficient state of the country’s economic management must end. From 2014 to this year, people’s purchasing power has fallen sharply. An important part of the problems now is not the sanctions but the weakness of management. Inadvertently, [the government’s officials] have drastically devalued the currency against foreign currencies. You can also see the status of the stock market. [President Hassan Rouhani] claims that both the centrifuges and the economy are running. Such words are strange and disappointing in this situation,” the state-run Fars news agency reported on March 6, quoting Mohsen Rezaei, secretary of the regime’s Expediency Discernment Council.

While these economic hardships have turned the society into a powder keg, the state-run media warn officials of the national boycott of the regime’s upcoming sham presidential elections and possible protests.

On Sunday, the state-run Sharq daily referred to the national boycott of the regime’s sham parliamentary elections in February 2020 and underlined, “The forthcoming presidential election will probably not be widely welcomed by Iranian citizens.”

It further underlined that the regime’s so-called candidates “do not have a specific, studied and expert program.”

Sharq also referred to the November 2019 uprising, which rattled the regime’s foundation, and which started due to economic problems.

“The November 2019 protests against rising gasoline prices showed a significant reduction in social resilience in the country. These protests cannot be limited to the issue of rising gasoline prices. Rather, it is a set of various structural factors that caused the rise in gasoline prices to ignite these protests. The erosion of social capital and the sharp decline in social trust is one of the consequences of the continuation of difficult economic conditions in the country, the dimensions of which are becoming more and more worrying. The continuation of these conditions, in turn, affects social resilience, thereby revealing a vicious cycle of consequences,” Sharq’s article read, describing another uprising as a “vicious cycle of consequences.”

While the regime had tried to deceive people by using its so-called “reformist” faction, now the officials of the same faction and their media acknowledge that this plan no longer works.

“People chanted ‘reformist, hardliners; the game is over.’ They do not have hope in anyone. Reformists are no longer a safety valve [for the regime] to prevent an uprising. Even now, all the [regime’s officials] are worried about the coming of the lower classes to the field of protest. Another possibility is that you cannot control urban riots. Society has become polarized, and a population of about 70 million people is dissatisfied,” the state-run Mostaghel daily wrote on Sunday.

US - Iran Relations: Will There Be A New Policy Against Tehran's Dirty War?
Comment
Iran’s Sham Presidential Elections and Restive Society