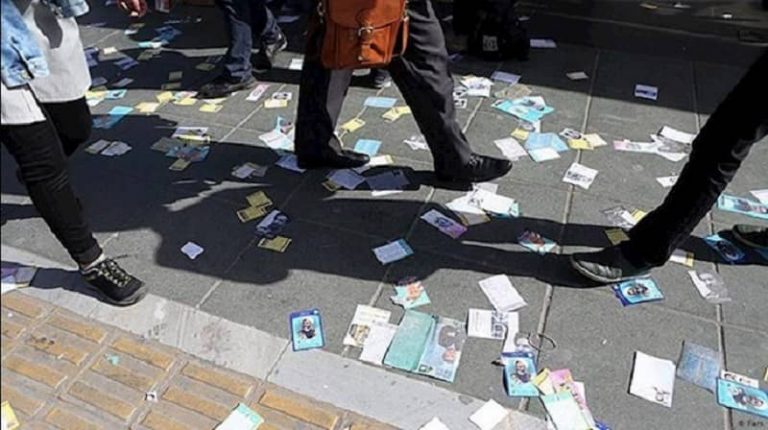 Iran’s regime will hold its sham presidential elections in June 2021. Iran’s crises have caused factional feuding within the regime. State-run media warn officials of another national boycott and possible protests.

After the major Iran protests in November 2019 and the subsequent national boycott of the regime’s sham parliamentary elections in February 2020, mullahs fear another boycott. Under Iran’s social crisis and society’s restiveness, this boycott underlines that the mullahs’ regime is illegitimate, and people want regime change.

“The elections of [the Persian Year of] 1400 may be considered as one of the few elections in which everything is vague except the date of holding, which is June 18. The people’s economic and livelihood dissatisfaction, on the one hand, and the view of the government and the Guardian Council on the forthcoming elections, on the other hand, have overshadowed the 13th presidential election more,” wrote the state-run Arman daily on Monday.

Key contrasts differentiate elections in western democracies and the process that is actually selection/appointments in Iran. A closer look at the dynamics involved in the Majlis (parliamentary) staged by the mullahs’ regime leads one to realize the entire process is nothing but a sham while true power lies elsewhere. The Guardian Council vets all candidates seeking to take part in the elections. It is this body that selects the candidates who may run for the presidency.

There are general requirements for candidacy, which include: being a citizen of Iranian origin; over 30 years of age; a Muslim; qualified to be a care-taker of the Republic; and a possessor of both management abilities and a record of religious and political affiliation to the ‘Republic.’

Thus, there is no such thing as called “electoral body.” There has never been a large election turnout since the 1980s in Iran. Yet, the 2020 sham parliamentary elections had an unprecedented small turnout.

“Neither the government nor the political factions want the parliamentary elections in 2020 to be repeated in the elections,” Arman daily wrote.

Yet, due to the regime’s wrong policies, which have resulted in social and economic crises, the Iranian society has turned into a powder keg. People are at odds with the regime.

“The country’s general conditions are not very suitable for various reasons such as weak management, lack of realization of development plans and 20-year vision, lack of clear strategy in practice after four decades of the victory of the 1979 revolution. Poverty, corruption, discrimination, inefficiencies, unemployment, and recent skyrocketing costs that are re-creating the wartime era, along with the people’s livelihoods, have led to declining satisfaction and a loss of social capital. In general, the conditions are not very good,” Arman daily adds.

“In political parties, the goal is to maintain oneself alongside the system, into the system, although they are largely blocked. That is why the people passed the election. Since January 2018 [uprising], the reformists’ positions changed. They called people rioters and gave the wrong address for the origins of [protests], and continue to do so,” state-run Sharq daily wrote on Monday.

Iranian people rejected the regime’s factions during their major protest in 2018 and 2019 by chanting “reformists, hardliner, the game is over.”

“People chanted ‘reformist, hardliners; the game is over.’ They do not have hope in anyone. Reformists are no longer a safety valve [for the regime] to prevent an uprising. Even now, all the [regime’s officials] are worried about the lower classes coming to the protest field. Another possibility is that you cannot control urban riots. Society has become polarized, and a population of about 70 million people is dissatisfied,” the state-run Mostaghel daily wrote on Sunday.