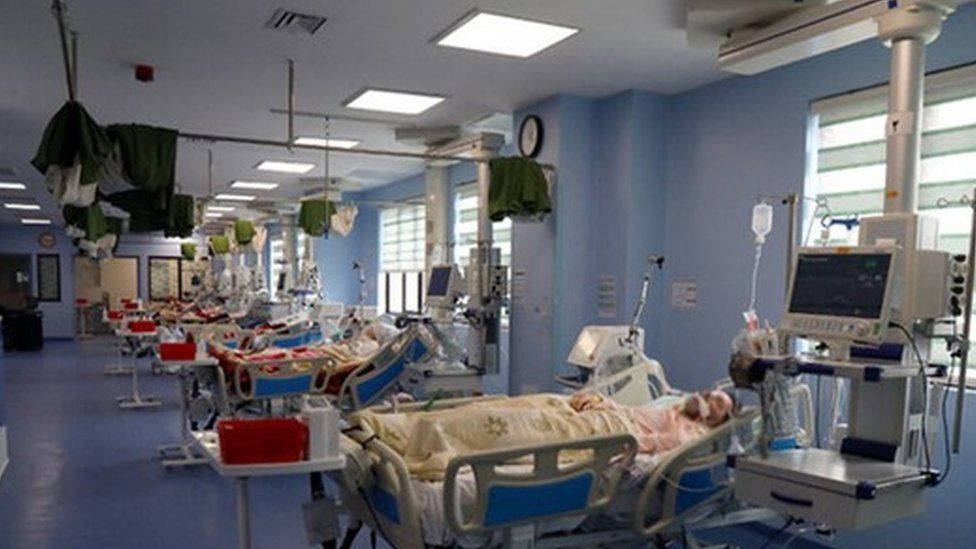 Ex-IRGC CIC Jafari: We turn Coronavirus’s threat into an opportunity, there are more dangerous viruses in society that are not tangible

Today, Hassan Rouhani, frustrated over the exposure of his lies, repeated his redundant boastful rhetoric, “Why do we have to search for some (flaws) and constantly magnify it? There are already plenty of satellite channels to do so, no need for insiders.” Rouhani added: “A small minority get their instructions from abroad, and unfortunately these (insiders) repeat whatever they are told and act as a mouthpiece for foreigners. They are skeptical about statistics, treatment, and the country’s progress, as well as the efficiency of the system, and day and night, they are ‌tempting others.”

In another development, today, Major Gen. Mohammad Ali Jafari, the former commander in chief of the IRGC, reiterated that the regime wants to “turn Coronavirus threat into an opportunity.” He told IRGC’s news agency, Fars, “We need to take this exercise seriously and use it as an experience because there are more dangerous Coronaviruses in society that are not tangible to us and we do not feel it. It takes skill to be able to use this capacity.”

Earlier, on April 11, 2020, the Iranian Resistance’s Leader Massoud Rajavi had stated that for Khamenei, “Every death is an opportunity and a blessing.”

Mohammad Hossein Ghorbani, a deputy health commissioner in the regime’s parliament and representative of the Ministry of Health in Gilan, told the state-run news agency, Tasnim, “The lifting of restrictions on inter-provincial traffic is dangerous and catastrophic. If the necessary measures are not taken, the start of a second peak is not far from reality.”

Meanwhile, Mohammad Alikhani, head of Tehran’s City Council’s Transportation Commission, told the state-run daily, Shahrvand, that 317 taxi drivers had been infected with Coronavirus, out of which 19 had lost their lives.

The regime’s repressive measures to prevent the disclosure of the actual dimensions of the tragedy continue. Today, Revolutionary Guard officer Ali Akbar Kiani, Commander of State Security Force in Torbat Heydariyeh was quoted by IRNA as saying, “Following the publication of fake news about the Coronavirus on social media, the issue was followed up by a FATA police team. Three women were identified and arrested after coordinating with the judiciary… Causing anxiety in public in cyberspace is punishable by prison and cash.”

The state-run daily Sharq-e-Amrooz wrote today, “The government has put two options before the people; on the one hand, it is trying to keep people at home to prevent the spread of virus… When the government closes businesses for any reason, their losses must be compensated for. Still, the government has reopened the shops and stores so that no one could claim damages from the government later. Unfortunately, the reopening of businesses will lead us to a new peak in the Coronavirus epidemic, and then the government will have to spend billions of dollars on public health … Hassan Rouhani cannot choose between the two. This double standard has made people desperate.”

While sending the Iranian people who are trying to make ends meet to the altar of Coronavirus, today, the religious fascism ruling Iran announced with great fanfare that it had launched a military rocket into space, the cost of which the Iranian people have paid for. The regime is mistaken to believe that such a hollow show of force which breaches international law, can push back, and neutralize the crushing uprising waiting in the wings.

Pointing to “The theatrical and propagandistic management of the Coronavirus crisis in the country and the contradictory and inefficient government decisions and actions, the daily Jahan-e-San’at wrote today: “Economic consequences of corona and the following social implications are beginning to show in the country. The economic and social implosion will be inevitable soon, followed by economic and social discontent. This time the protests would be fiercer, more violent. One can talk of a major uprising in which most of the deprived and middle classes would take part.”