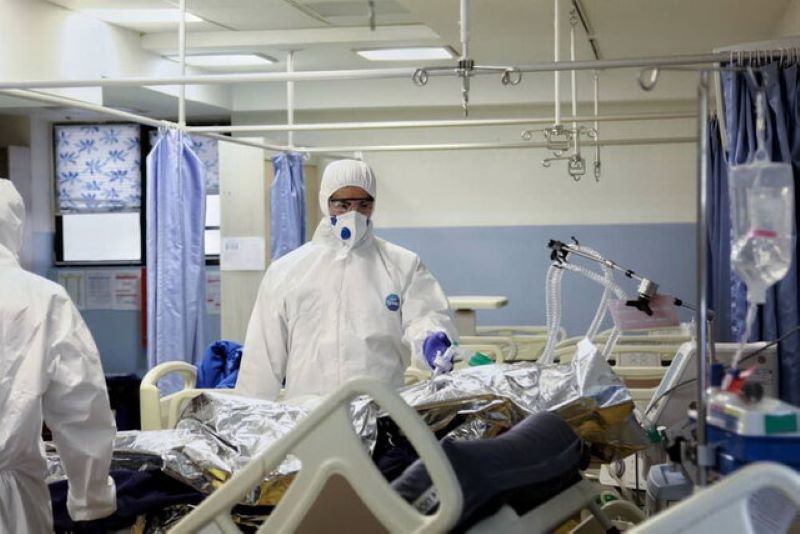 Two weeks after Khamenei and Rouhani force the lower class back to work new wave of Coronavirus outbreak begins, especially in Tehran and Khuzestan

Head of Coronavirus Combat Taskforce: The number of outpatients in Tehran on Wednesday was 6,390

The People’s Mojahedin Organization of Iran (PMOI / MEK)announced on Thursday, April 23, 2020, that the Coronavirus fatalities had exceeded 34,200 in 296 cities across.

According to the medical staff in Rasht (north Iran), the heads of the city’s hospitals had been instructed from the beginning to hospitalize only critically ill patients, and send other Coronavirus patients to their homes with a prescription. As a result, many people died in their homes, and their names were not registered. In Razi Hospital alone, at least six people die from Coronavirus every day, but the causes of death are reported differently.

In the impoverished Sistan and Baluchestan Province, many victims, especially villagers as well as Pakistani and Afghan citizens, who do not have access to hospitals, have died and been buried in their homes and villages.

In another development, less than two weeks after Ali Khamenei and Hassan Rouhani forced people back to work, a new wave of the disease has begun in Tehran and other provinces. The regime officials are claiming that the new wave of the outbreak is due to Nowruz (Persian New Year) trips and not observing social distancing regulations by the people.

Today, Khuzestan Governor, Gholamreza Shariati told the official state news agency, IRNA, “The trend of infection in Khuzestan is on the rise. The speed of infection has soared compared to last week… Given the population of Ahvaz, this increasing trend could paralyze the entire Province, which is alarming. East and west of Ahvaz, Khorramshahr, Ramshir, and Abadan have the highest cases of infection, respectively. Infections in villages have also increased.”

Simultaneously, a regime Parliament deputy from Dezful told IRNA, “During the New Year period, even though Khuzestan received fewer guests and travelers, today, it has entered a peak of Coronavirus outbreak. The number of those infected is regrettably increasing.”

In Tehran, Alireza Zali, head of the National Coronavirus Combat Taskforce (NCCT) told IRNA, “Every day we are facing new developments and steps towards normalcy. This is while we are facing an upward trend of outpatients and inpatients in Tehran. We must note that Tehran is different from other provinces, and the decision to open businesses and institutions must be taken differently… In the step-by-step opening of businesses and jobs, we must not act hastily because it would create new challenges and difficulties.”

Zali explicitly said in an interview with the state TV that on Wednesday, April 22, 2020, in total, 6,390 Tehran residents have gone to medical centers (for Coronavirus infection); some with critical condition were immediately admitted to the ICU.

Head of Tehran’s emergency unit, Peyman Saberian, also said, “These days patients who come to hospitals with Coronavirus infection are in critical condition and need special care. Thus, we have to transfer them to ICU beds immediately.”

Dr. Massoud Mardani of NCCT, said, “In cities such as those in West Azerbaijan, Kohgiluyeh, and Boyer-Ahmad, and Ilam provinces where fatalities were not as high as Tehran and Gilan, we are dealing with a new wave of deaths now.… If the current trend continues, we will definitely face bigger waves of this disease.” In response to a question on the reason behind higher death toll in Tehran compared to most of the cities he said, “In smaller cities and in the rural areas many people do not realize that they are infected with Coronavirus and when they pass away, their names are not registered under Coronavirus… In some cities, we are struggling with the first peak, while in others, we have passed the peak. In some cities, we are dealing with the beginning of the second peak.”

State-controlled daily Jahan Sanat noted that “Security and political management of the COVID-19 crisis, has pushed the country to the point that from the beginning of May 2020, the wave of the disease will start again and will continue until last week of June 2020. As such, the number of those infected and the death toll will increase… The outbreak will be so severe and unexpected that the consequences would only be the state of war, launching a military-security offensive to control the disease as well as the economic and social consequences.”