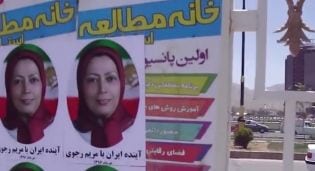 Ahead of a large annual “Free Iran” gathering in Paris on Saturday, the exiled Iranian opposition movement says hundreds of incidents of risky expressions of support have been taking place inside Iran – from distribution of pamphlets to the appearance of posters and graffiti.

The National Council of Resistance of Iran (NCRI)/People’s Mujahedeen Organization of Iran (MEK) says hundreds of videos and photos of the incidents have been taken in dozens of towns and cities, and compiled a sample in a video clip.

Photos of NCRI leaders Maryam and Massoud Rajavi feature prominently, along with slogans which the NCRI translated as saying, among other things, “My vote regime change, down with Khamenei, our choice Maryam Rajavi.”

Such demonstrations are highly risky in Iran, a repressive state that has outlawed the NCRI/MEK as a “terrorist” group and executes hundreds of people each year for crimes including political and security offenses.

An Iranian foreign ministry spokesman on Wednesday referred to the group as a “hypocrite cult.”

NCRI’s secretariat said the acts of defiance in Iran “emphasize the fact that this regime and all its factions have no legitimacy whatsoever and that the July 1 gathering represents the will of the people of Iran.”

The NCRI is gearing up for a major meeting on Saturday in northeast Paris, where attendees will include a group of prominent American supporters – Republicans and Democrats – as well as politicians from European and Middle East countries.

Previous such events, which typically draw tens of thousands, have seen participants – including, last year, a senior member of the Saudi royal family – call for the overthrow of the clerical regime in Tehran.

A promotional video says this year’s event will be “a gathering for a free Iran, against terrorism and extremism in the name of Islam; a call for a stand against the Iranian regime’s destructive regional interference role; and a call for a new approach to the theocracy ruling Iran.”

The 2017 theme is “Onward with the Iranian Resistance, Regime Change within Reach.”

Among the guests will be a Syrian opposition delegation. Iran is heavily involved in propping up the Assad regime, through direct involvement of the Islamic Revolutionary Guard Corps (IRGC), and via Hezbollah and other Shi’ite proxies.

Some of the high-profile Americans scheduled to attend signed a statement of support this week ahead of the rally, accusing the regime of responsibility for “he instability and crisis in the region today,” and voicing support for change in Iran and for the NCRI.

“We believe that change is within reach, not only because the regime is becoming engulfed in crisis, but also because there is a large and growing movement organizing for positive change,” the statement said.

“A viable organization capable of ending the nightmare of religious dictatorship by establishing freedom and democracy, tolerance, and gender equality has steadily gained visibility, popular support and international recognition,” it continued, in reference to the NCRI.

Possibly in a bid to preempt accusations of interference in Iran’s affairs, the signatories said that “[t]he obligation to stand up to this corrupt and illegitimate regime and say ‘no more’ rests with the Iranian people alone.”

But, they added, “the international community must meet its responsibility by condemning the mullahs’ oppression and embracing the Iranian people’s aspirations for a free and prosperous Iran accepted and respected around the world.”

The NCRI/MEK was a U.S.-designated foreign terrorist organization until 2012 when then-Secretary of State Hillary Clinton delisted it, citing its renunciation of violence and “the absence of confirmed acts of terrorism by the MEK for more than a decade.”

Appearing before the House Foreign Affairs Committee two weeks ago, Secretary of State Rex Tillerson said it was administration policy to “work toward support of those elements inside of Iran that would lead to a peaceful transition of that government.”

“Those elements are there certainly, as we know,” he added, but without indicating whether he was referring to the NCRI, the “Green Movement,” or other elements.

Tehran accused Tillerson of violating international law and the United Nations Charter, and wrote a letter to the U.N., complaining about what it called “a brazen interventionist plan” to change the government.

Reacting to a news story on Iran’s complaint to the U.N. Wednesday, Bolton tweeted, “The only long-term solution to the threat Iran poses in the Middle East is, indeed, regime change.”

In a subsequent Twitter post, he added, “There are ways of supporting the efforts of the Iranian opposition that do not involve the use of American force.”