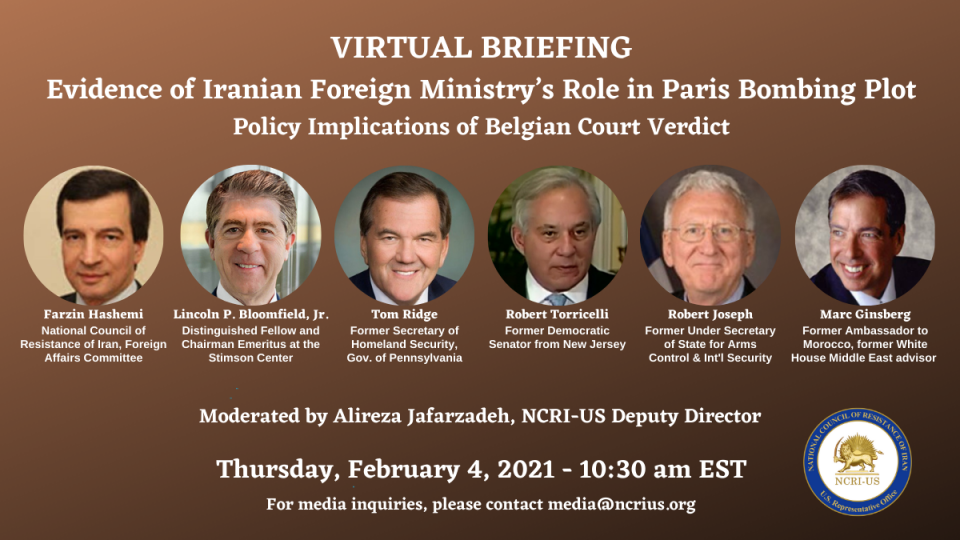 Washington, DC, February 1 – On Thursday, February 4, 2021, at 10:30 am EST, the U.S. Representative Office of the National Council of Resistance of Iran (NCRI-US) will host a virtual briefing to address the policy implications of the verdict by a Belgian court in the trial of a senior Iranian regime’s diplomat on charges of plotting to bomb a 2018 opposition rally in Paris. The briefing will take place just hours after the court announces its judgement.

The briefing will present extensive evidence, gathered in a two-and-a-half-year multi-national official investigation, which proves Iran’s Ministry of Foreign Affairs and its embassy in Austria, in collaboration with the Ministry of Intelligence and Security, executed the terror plot.

Since 1984, the United States has classified Iran’s regime as the world’s leading state-sponsor of terrorism. All of Tehran’s major terrorist operations in western nations have been facilitated by its diplomatic corps. However, this is the first time that a diplomat has been tried on terrorism charges. Several agents working with Tehran’s embassy were also on trial.

Briefing will be moderated by Alireza Jafarzadeh, Deputy Director of the NCRI-US.