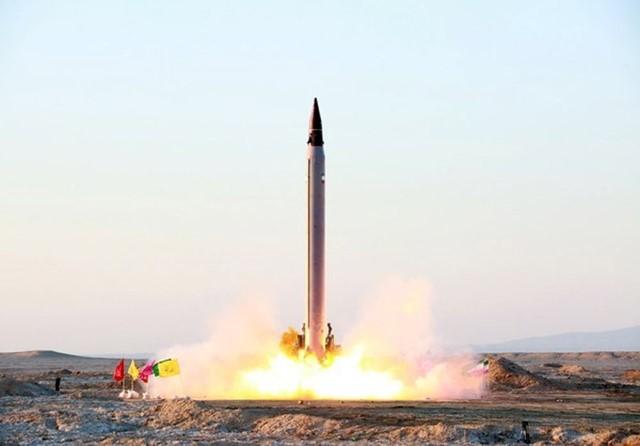 It was revealed that the Iranian regime tested another ballistic missile in April. A military official, Brigadier General Ali Abdollahi, publicly boasted about the supposed success of this test, which he said involved a weapon that could strike targets over 1,200 miles away.

This test-launch flies in the face of the widespread outcry that had been directed against Tehran and the Islamic Revolutionary Guard Corps (IRGC) in the wake of several previous tests. Two of them took place in October and November, after nuclear negotiations between Iran and the P5+1 had been completed but before the Joint Comprehensive Plan of Action was actually implemented.

In March, about two months after the deal’s implementation, the IRGC carried out three more launches. The initial tests were widely recognized as direct violations of a United Nations Security Council resolution banning the Iranian regime from work on weapons capable of carrying a nuclear weapon.

UN member states have had a hard time holding Iran “in violation” of the Security Council resolution because it merely “calls upon” Iran to avoid ballistic missile tests, as opposed to simply declaring that it “shall not” carry them out.

The United States’ soft policy has given the Iranian regime and particularly the IRGC ample opportunity to exploit what they perceive as American weakness. And they have done so repeatedly. The ongoing ballistic missile tests are only one example of this, but they are an example that is difficult to ignore.

Although the White House, under pressure from U.S. Congress, did eventually respond to the October missile test by imposing new sanctions on individuals and businesses with ties to the Iranian ballistic missile program, it soon became clear that Tehran did not take this seriously. The Iranian regime’s president, Hassan Rouhani, whom the Obama administration has falsely portrayed as a moderate force in the Iranian regime, responded to the sanctions by directing his defense minister to greatly increase Iran’s ballistic missile stockpiles and development.

Clearly, Rouhani and his colleagues did not believe that the White House would continue along an appropriately confrontational line after one round of halfhearted sanctions. And considering that there was no clear response from the Obama administration to the follow-up test in November, to the three launches in March, or to the Iranian military’s revelation of another test in April, it seems clear that Iran’s ruling clerics were justified in their dismissiveness.

This same attitude has allowed the IRGC and other Iranian institutions to undertake many other provocations with impunity. These include the brief detention of 10 American sailors in January, the arrest of Iranian-American dual nationals and increasing meddling in Syria.

It seems odd that the recent outpouring of anti-western propaganda by the Iranian regime is ongoing at the same time that the Obama administration has been actively encouraging Western companies to reengage with Tehran.

The current U.S. policy toward Iran threatens to enable the regime’s behavior by channeling money into the hands of the individuals and institutions associated with the IRGC and the unaccountable foundations, who still exert the greatest influence on Iranian foreign policy.

With U.S. presidential elections just around the corner, there is good reason to hope that this policy will come to an end. But every influential person in Washington who recognizes the danger posed by Iran’s ballistic missile program must help to make sure not only that change is guaranteed, but also that it will lead to an alternative policy that specifically constrains the power of the IRGC and similar entities.

A new U.S. policy should finally take into account the significant role that the Iranian people and the organized opposition play. One place to look for clues to a better policy may be the July 9 international gathering of tens of thousands of Iranians, where the Iranian opposition leader Maryam Rajavi will be joined by dozens of current and former senior U.S. and European officials to call for a new approach and a decisive policy vis-à-vis the regime in Tehran.

It is time for the real moderates and patriots of Iran who have paid a high price for opposing the regime for the past three decades and strive for a secular, democratic, non-nuclear republic in Iran to be viewed by the United States and the international community as what they are, the true face of a free Iran.