UN Must End Iran’s Impunity of Crimes Against Humanity 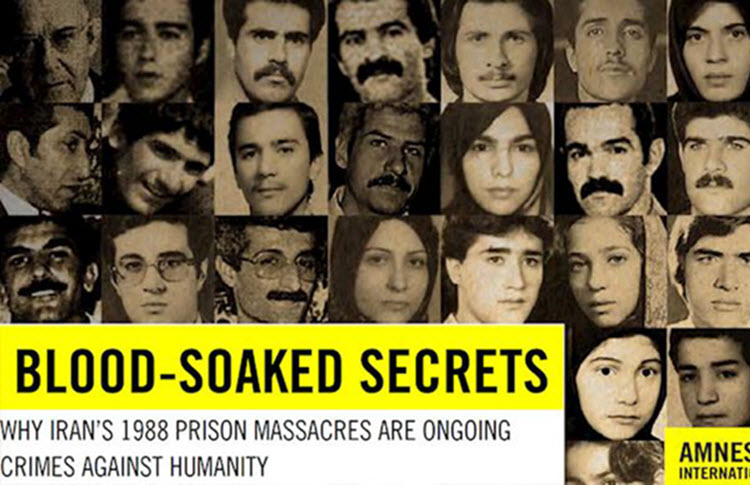 The United Nations Third Committee is discussing human rights in the next few weeks. As part of its final resolution, it should include a paragraph on one of the worst crimes against humanity in the 20th century: The massacre of more than 30,000 political prisoners in 1988 by the Iranian regime.

The U.N. General Assembly’s Third Committee deals with human rights matters. It meets annually and examines human rights questions around the world. Prior to this year’s debate, on October 26, the Special Rapporteur on the situation of human rights in Iran, professor Javaid Rehman, noted in a statement that the Iranian regime “must conduct an independent, impartial and transparent inquiry into the violent crackdown against protests in November 2019 and January 2020, and bring human rights violators to justice.”

In his annual report delivered to the General Assembly, Mr. Rehman was referring to more than 1,500 protesters killed in November 2019, including children. The Iranian regime is terrified that the people are now calling for democratic change and the overthrow of the mullahs, so it has resorted to extreme violence and torture.

In fact, Amnesty International reported in September that thousands of people arrested during the November protests are being viciously tortured.

In mid-October, in his annual report, U.N. Secretary-General Antonio Guterres condemned “repeated and serious violations” of human rights in Iran as a “grave concern.” One of the report’s highlights is the “violent repression and use of force by security forces” in November 2019.

Recently, the regime executed a number of protestors to terrify the population and avert more protests. On September 12, Navid Afkari, a popular wrestling champion, was executed for participating in the protests, drawing extensive international condemnation.

In their remarks at the U.N. Third Committee on the situation of human rights in Iran, U.S. representatives pointed to another massacre by the regime and rightly noted: “An independent and transparent investigation is needed into the 1988 ‘Death Commissions.'”

That demand echoes widespread calls by the Iranian people. For example, in 2016 and 2017, university students disrupted multiple campus speeches by officials to ask about the 1988 massacre. The protests were so widespread that they were even covered by the regime’s own media outlets despite an unofficial ban on discussions relating to the massacre. It got to a point that the regime’s highest authority Ali Khamenei felt the need to intervene in 2017 to warn that those executed were “henchmen” not “martyrs.”

Multiple officials went on the record to defend the 1988 massacre as public opinion demanded more answers. For example, Mostafa Pourmohammadi, one of the members of the “death commissions” in 1988 defended the massacre of tens of thousands of political prisoners and vowed to continue “exterminating” the main opposition Mujahedin-e Khalq (MEK), whose supporters made up the majority of the 1988 victims.

In 2016, audio files from three decades ago were revealed by the office of the former No. 2 official of the Iranian regime, Hossein-Ali Montazeri, who spoke out against the executions. Because of his protests against the killings, Montazeri was stripped of his position as the heir to then-supreme leader Khomeini. “In my view,” Montazeri told members of the death commissions in the audio tape, “the biggest crime in the Islamic Republic, for which the history will condemn us, has been committed at your hands, and they’ll write your names as criminals in the history.”

The “Death Commissions” were comprised of three members in many Iranian provinces, which quickly put on “trial” and ultimately executed 30,000 political prisoners, the overwhelming majority of whom were affiliated with the opposition Mujahedin-e Khalq (MEK). Among them were teenagers and pregnant women. According to Amnesty, the prisoners were asked by the Death Commissions “if they were prepared to express repentance for their past political beliefs and activities and denounce their political groups in writing. In some cases, they were also asked if they were prepared to execute or inflict harm on fellow dissidents.”

Geoffrey Robertson, who served as the first President and Appeal Judge in the U.N. War Crimes Court in Sierra Leone, said in a report on the 1988 massacre: “The street murders of protestors, the rigged television ‘show trials’ and the torture in its prisons are all reminders of what happens when the world fails to act over a massive human rights violation. It has become a recent requirement of international human rights law that nations should face up to, and make amends for, the atrocities of their past: there must be no ‘posthumous impunity.'”

Still, many of the Death Commission members continue to hold senior positions in the regime, including Alireza Avaei, the regime’s minister of justice. Another one is Ebrahim Raisi, the regime’s head of the judiciary.

Ken Blackwell, the former United States Ambassador to the United Nations Commission on Human Rights, is Chairman of the International Foundation of Electoral Systems.