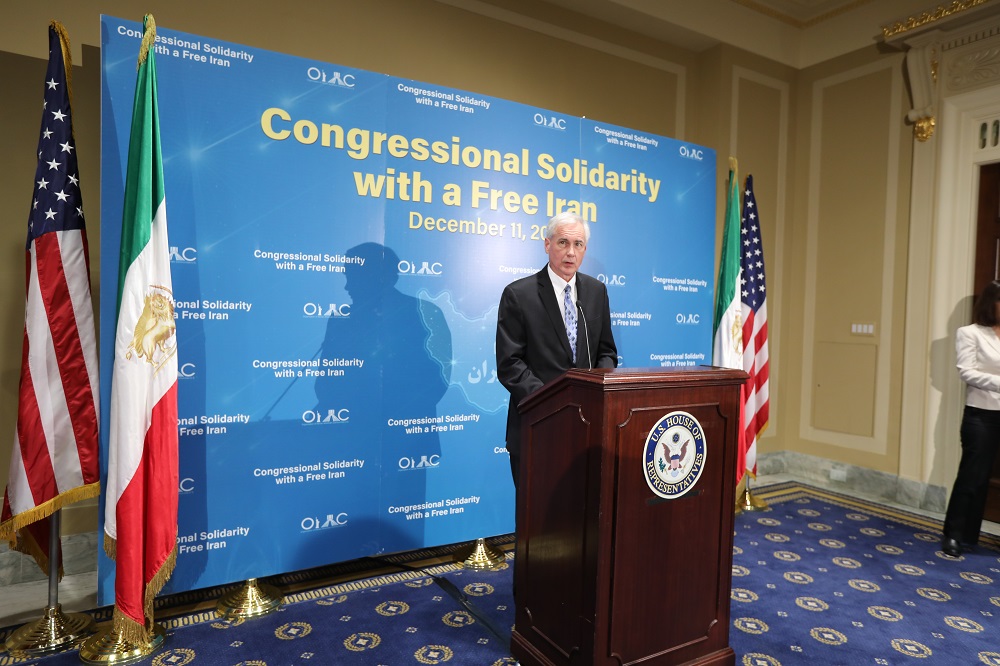 Cross-party lawmakers in the United States House of Representatives on Wednesday declared their support and solidarity with the Iran protests.

The Members of Congress addressed a House briefing on December 11, 2019, to support ongoing protests in Iran and to hold the Iranian regime accountable for indiscriminate and deadly use of force.

The briefing “Congressional Solidarity with a Free Iran” was organized by the Organization of Iranian American Communities (OIAC).

Rep. Scott Perry told the event: “It’s important that we voice our concerns about what’s happening inside Iran. And voice our support for the people that are struggling to breathe free inside of Iran. And make the distinction, the difference between the people that want to be free and are protesting their government at significant peril—the reports are thousands killed, captured, arrested, etc.—and make the differentiation between the regime that runs Iran and the wonderful people of Iran who want to be free, who want to live in the 21st century, who want to have a relationship with other freedom-loving people around the world.”

“We support the efforts of those who want to be free and we demand that the totalitarian regime of Iran let them be free and let them determine their own destiny,” added Congressman Perry who is also a retired Brigadier General.

Rep. Raul Ruiz said: “Since the revolts erupted a few weeks ago, we have watched as protests have developed in nearly 200 cities, resulting in over 4,000 people injured and tragically over 1,000 people killed by Iranian security forces. This abhorrent use of violence by the state security forces and the subsequent internet blackout are just the most recent examples of merciless attempts of censorship by the ruling religious dictatorship. This regime’s response to the people’s protest is an outrage and the loss of life is deeply saddening.”

“I support a free Iran. I support Mrs. Maryam Rajavi‘s 10-point plan for the future of Iran. And I will continue supporting the Iranian people in their protest for their basic rights, freedom, and democracy. The Iranian people have spoken, and the United States has heard you, will be vigilant and stands with you in solidarity,” he added.

Rep. Paul Gosar said: “The uprising on November 15 has really escalated. Now we see it all throughout Iran’s provinces, over 130 different cities. And we saw a real crackdown by this Iranian regime. Now they turned off the internet. They’re killing off their own citizens. That is a trademark of barbarians. We have to start looking at what’s around the corner, that hope, the mission of trying to get back to that resolution and the 10-point plan that Maryam Rajavi has put forward. That’s the first step here in the United States. … So, keep the faith, the eyes of freedom are looking upon you.”

Rep. John Garamendi said: “Iran’s malign activity throughout the Middle East is of enormous concern to us. All of us need to work together to address those challenges. And in particular, be very much aware of the efforts of organizations such as yours and people within Iran who are fighting for their freedoms. So, keep us informed, stay strong, stay determined.”

Rep. Tom McClintock said: “Nearly 250 years ago, America’s founders struggled for their liberty against a tyrannical regime and today the Iranian people strive for that same freedom. Forty years after taking control of Iran, the clerical regime is still the number one state sponsor of international terrorism while at the same time it slaughters thousands of its own citizens who dare stand up for their God-given human rights. As the tyranny of the mullahs has become more extreme, the international resistance to them has become more resolute. In every city in that afflicted nation, the courage and determination of the Iranian people to throw off these oppressions and to hold accountable these oppressors have been seen and applauded around the world.”

“Last week, the United Nations received video evidence of the violence that the Iranian regime has turned against its own people. As the regime earns the revulsion and condemnation of the civilized world, the Iranian freedom fighters are earning the admiration and support of free people everywhere. Last year, at least seven Iranian state-sponsored terror plots or operations were foiled in Europe, the Balkans, and the United States. In July 2018, European law enforcement officials stopped a terrorist plot against the peaceful international convention dedicated to a free Iran. The regime’s reign of terror against the Iranian people and their democratic aspirations must remain at the center of all international relations with that dictatorship.”

“The more the story of Iran is told of its proud ancient heritage of freedom and civilization, and of its current curse of despotism and terror, the more the world has rallied to your cause. We’ve seen this in the liberation of the MEK freedom fighters trapped in Iraq, we have seen it in the growing opposition to Iran throughout the Middle East, we’ve seen it in the strong leadership of President Trump with his refusal to succumb to the weak appeasement policies of the past. We see it also in the House of Representatives, where 123 of my colleagues from both parties have co-sponsored my bill, H.Res 374. In it we unequivocally condemn Iranian state-sponsored terrorism and express in no uncertain terms our support for the Iranian people’s desire for a democratic secular and non-nuclear republic of Iran,” added Rep. McClintock added.

Rep. Brad Sherman said: “I also want to commend Madame Rajavi for her advocacy for democracy and her advocacy for women’s rights and human rights. This May, I joined my colleagues, I was the lead Democrat in introducing House Resolution 374 which supports the people of Iran’s right to free expression and condemns the Iranian regime’s crackdown on legitimate protest. Now that this regime has killed over a thousand of its own people, we need to pass this resolution and we need to do everything we can to say no to the Islamic Republic. I also want to urge the president to actually enforce the laws we have passed that prevent the export of censorship technology to Iran and the Comprehensive Iran Sanctions and Accountability Act provides those very limitations.”

“I could go on, but many of you know this very well. Many of you have heard me speak many times. I’ve also led Congressional efforts to protect Iran opposition members outside Iran. Last summer, I led a letter to the Albanian prime minister with seven of our colleagues urging protections of the members of the MEK living in that country. We have seen all of a sudden Iran has a big embassy there. And why is that?”

Rep. Steve Cohen said: “You’ve got 1000 fallen during this Iran uprising. And I haven’t had a chance to look at all the faces, but the ones I see, and when you do I mean it just really does break your heart to think that people are dying and the government is doing these things. So, it’s really unfortunate and we need to support and hope that the voices for freedom that express themselves around the world are heard and they’re heard strongly in Hong Kong but they’re also heard in Iran. And the voices in Iran need to be heard and listened to.”