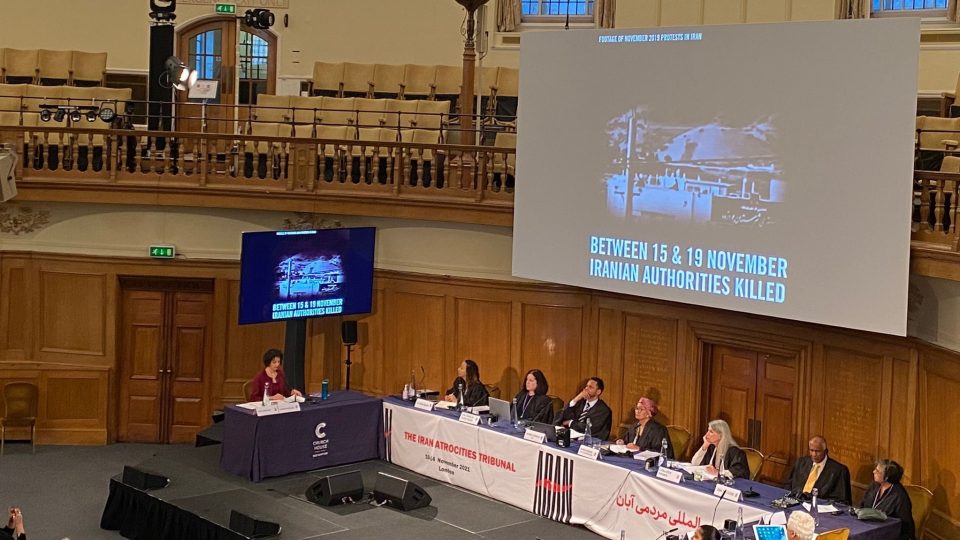 On Wednesday, a People’s Tribunal began in London with the aim of investigating the Iranian regime’s crackdown on nationwide protests that took place two years ago. The event was jointly organized by the organizations like Justice for Iran, Iran Human Rights, and Together Against the Death Penalty. It is scheduled to continue until Sunday, the eve of the second anniversary of the outbreak of the November 2019 anti-regime uprising, during which time 45 witnesses will present evidence. A public statement of the tribunal’s findings is expected in early 2022 and is likely to include recommendations for the international pursuit of accountability for 133 Iranian officials who have been explicitly identified as having a role in the crackdown.

Several organizations not directly involved in those proceedings have also issued statements in recent days drawing attention to the uprising’s anniversary and condemning not just the regime’s initial crackdown but also its ongoing efforts to intimidate and silence eyewitnesses and the families of those killed by security forces.

In 2019, the People’s Mojahedin Organization of Iran (PMOI/MEK) was quick to determine that the death toll from mass shooting incidents rose to over 1,500 over the course of only several days. That number was later confirmed by Reuters, which cited multiple sources from within the regime’s Interior Ministry. In official statements, however, authorities have spent the past two years downplaying the incident and have even attempted to claim that unspecified entities other than the security forces were responsible for many shooting deaths.

There U.N. Security Council has so far declined to open a formal investigation into the 2019 crackdown and to establish a mechanism for accountability. The western powers have been showing little support for this course of action while they remain preoccupied with salvaging the 2015 Iran nuclear deal. Negotiations toward that end are expected to resume in Vienna on November 29.

The unfolding tribunal sends the message regarding domestic abuses by the Iranian regime, as do a number of other activist movements addressing a range of high-profile incidents. The longevity of some of those movements further underscores the perception that Tehran has developed a strong sense of impunity in such matters, thanks in large part to a relative lack of international consequences.

In September 2020, seven United Nations human rights experts made reference to that impunity in an open letter addressed to Iranian authorities regarding a massacre of political prisoners that took place in the summer of 1988. The letter appeared to take it for granted that Tehran would not respond in any meaningful way and that it would ultimately refuse to bring the perpetrators to justice and make up for their prior inaction. It noted that in the months following the massacre, the UN recognized that there had been an upsurge in politically-motivated killings, but neither the General Assembly nor any relevant UN institution followed up on the reports.

“The failure of these bodies to act had a devastating impact on the victims and families as well as on the general situation of human rights in Iran,” the special rapporteurs stated, adding that silence also “emboldened Iran to maintain a strategy of deflection and denial” right up to the present date. That strategy is reflected in the regime’s approach to the aftermath of the 2019 crackdown. And this is by no means the only connection between that crackdown and the 2019 uprising.

In June 2021, following the sham election that brought Ebrahim Raisi to power in Iran, Amnesty International released a statement that described that development as a “grim reminder that impunity reigns supreme in Iran.” The statement declared that instead of being elevated to the presidency, Raisi should have been “investigated for the crimes against humanity of murder, enforced disappearance, and torture.” This assessment was built on two main foundations: Raisi’s status as head of the Iranian judiciary at the time of the 2019 crackdown, and his role as one of four officials in the Tehran “death commission” that oversaw the 1988 massacre.

The Iran Atrocities Tribunal is reportedly hearing from anonymous witnesses who were in Iran at the time of the 2019 crackdown. Their anonymity is vital because of the pressure constantly being exerted by the regime’s authorities upon those who speak out about the regime’s conduct, as well as upon their families.

On November 3 it was reported that security forces had raided the home shared by the mother and sister of the activist blogger Sattar Beheshti who was killed in 2012. Both Gohar and Sahar Beheshti were arrested in the operation and the latter’s husband was reportedly beaten in the presence of their 10-year-old children. Although the two women were released three days later, the incident still served as a threat to those who maintain criticism of the regime’s crimes. It came just a few days after Gohar Beheshti released a video marking the anniversary of her son’s death, and just as a foundation that was established in his name was planning a ceremony to commemorate not only Beheshti but also all those killed in November 2019.

Ongoing appeals for foreign intervention signal that that growth has even extended beyond Iran to include a wide variety of Western supporters of formal inquiries and international prosecution of persons involved in human rights abuses of every sort, from mass executions like the 1988 massacre to individual murders like that of Sattar Beheshti.