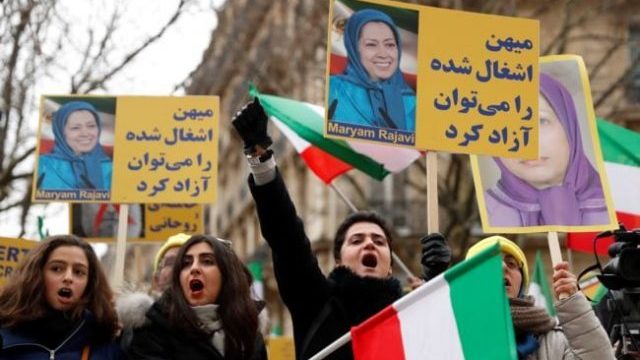 With audacious anti-regime protests roiling throughout Iran, wheezy officials of the dictatorship have repeatedly declared the uprising at an end. But the raw social anger did not appear out of nowhere, and it will not simply disappear into thin air.

Popular resentment has gradually risen over four decades of horrific human rights violations and iron-fisted rule; a nightmare punctuated by suppression, misogyny, economic mismanagement, back-breaking unemployment, crippled industries, and slithering social monsters feeding off of the armies of the destitute. The people of Iran have chosen to rise up, in a cogent expression of anti-regime sentiments that run deep and wide.

Marked by chants of “death to dictator,” the unrest points to a fundamental underlying reality: The Iranian people despise the ruling mullahs and all their policies and want a democratic, secular republic instead.

There are important messages to be heard: Contrary to conventional wisdom in the West, the Iranian regime is weak, vulnerable and in imminent danger. Sitting on empty strategic reserves, the mullahs are incapable of addressing the social, economic, and political aspirations of a population starving for modernity.

So, the first message is that regime change in Iran is not only probable but within reach.

Second, the “reformist vs. hardliner” dichotomy — a favorite narrative in Western capitals — has been definitively transcended. Gone are the days when protests could be erroneously attributed to this or that faction. Today, protesters are chanting: “hardliners, reformers, the game is now over.”

Third, the Iranian people are unambiguously calling for the “overthrow” of the rule of the mullahs. The battle lines are drawn: the Iranian people on one side and the entirety of the clerical regime on the other. Western policy should adjust, not deny.

In 2009, fissures at the top of the regime triggered massive protests. This time, unrest has erupted in response to deep-seated, multi-dimensional factors, including economic crises, social ills, systemic corruption, environmental disasters, seismic rural migration to cities incapable of growth, and lack of basic political and social rights and freedoms.

The resentment is not confined to the urban middle class; the rural populations in many towns and cities have been involved in the uprising since it started Dec. 28. These are the very people whom the regime long claimed formed its base of support.

Fifth, no matter how Tehran reacts in the coming days, given the profound root causes and the regime’s inability to seriously address them, resentment will continue to simmer and find new means of expression. The regime is accordingly strategically unstable and cannot withstand the eruption of more crises and unrest.

A striking feature of the recent protests has been their breakneck speed. The initial spark was in Mashhad, the country’s second largest city, on Dec. 28. Within 24 hours, people all over the country were demanding regime change in astonishing harmony. Not even a nationwide internet blockade stopped this dizzying tempo.

This, as well as the substance of the demands, demonstrate the people of Iran are undeniably ready for regime change, and they will not be satisfied with anything short of democracy. Just listen to them chanting “independence, freedom, an Iranian Republic,” “death to Khamenei,” and “death to Rouhani.”

Alarmed officials and the state-run media have relentlessly attacked the opposition, primarily the Mujahedin-e Khalq (MEK), which is the organizational engine of the protests. In a desperate phone call last week, the regime’s president, Hassan Rouhani, pleaded with French President Emmanuel Macron to limit the activities and movements of the MEK in Paris.

And on Tuesday, Supreme Leader Ali Khamenei acknowledged the role of the MEK in no uncertain terms: “They were prepared months ago. The media of the MEK admitted to this; they said, recently, that they were in contact with Americans some months ago, to carry out U.S.’ orders: to organize riots, meet with this or that person, find individuals inside the country to help them fan out to the people. And that it was they who initiated this.”

So, what should the U.S. and Europe do?

President Donald Trump has been right in rejecting the phantom “moderates” within the regime, declaring it is “time for change,” imposing new sanctions, and squeezing the Revolutionary Guards wherever the opportunity arises.

These steps should be coupled with an unambiguous declaration of respect for the Iranian people’s aspirations, by recognizing legitimate resistance movements, such as the MEK and the umbrella coalition of the National Council of Resistance of Iran (NCRI). These movements have a 40-year track record of struggle for democracy against dictatorship, have suffered most of the regime’s wrath, and they have the ability to lead Iran’s disenchanted toward actual democratic change.

The Iranian people have made their choice. Now, it is up to the international community to take a stand and support them in their noble quest for freedom and human rights. It is time to declare to the mullahs that it is their weakening dictatorship, not the uprising for freedom, that must end.