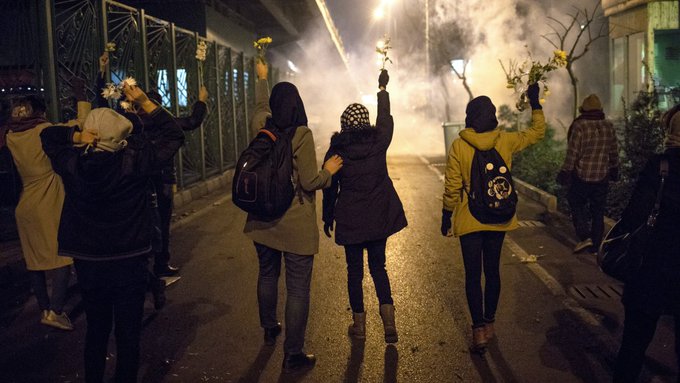 A bipartisan majority in the House is pushing for a resolution that condemns Iran for foreign terrorism and expresses support for the Iranian people calling for regime change.

Two dozen Republican and Democratic lawmakers spoke in support of the resolution on Wednesday during a virtual event hosted by the Organization of Iranian American Communities. Republican Rep. Tom McClintock of California, the legislation’s sponsor, said members of both parties are encouraged by efforts within Iran to demonstrate despite the threat of imprisonment or death.

“There is a reason why a strong bipartisan majority in the United States House of Representatives has come together to co-sponsor this resolution condemning Iran’s terrorist acts,” McClintock said. “It’s because the world is watching the struggle for freedom in Iran, and it is cheering for your cause.”

McClintock pointed out that Iranian citizens have “taken to the streets and the airwaves” to protest against Ayatollah Ali Khamenei’s regime, which he said has “lost any claim to legitimacy.”

The event’s moderator, Ramesh Sepehrrad, noted the significance of the resolution and the event. She said it was meaningful because both Republicans and Democrats have come together to support the legislation.

The resolution highlights foiled Iran-linked terrorist attacks against the National Council of Resistance of Iran, or the NCRI, an umbrella group of dissidents based in Europe and led by Maryam Rajavi that advocates for regime change in Iran. The resolution highlights a 2018 plot to attack a gathering of thousands of NCRI members and foreign officials, including President Trump’s personal attorney Rudy Giuliani.

In addition to condemning the alleged Iranian plots, the resolution calls on the U.S. to stand “with the people of Iran who are continuing to hold legitimate and peaceful protests against an oppressive and corrupt regime” and to recognize “the rights of the Iranian people and their struggle to establish a democratic, secular, and non-nuclear republic of Iran.”

Alireza Jafarzadeh, deputy director of the Washington office of the NCRI, told the Washington Examiner on Wednesday that the core of the resolution “relies on the support for the Iranian people’s movement to overthrow this regime as a prerequisite for a democratic, secular republic in Iran.”

The fact that eight of the ten diplomats or agents of the Iranian regime expelled or jailed in Europe and the U.S. for terror plots over the past two years were tied to operations against our movement attests to the reality that the NCRI is the alternative and an existential threat to this regime.

He also said that the legislation highlights the alleged attempts by the Iranian regime to target his organization, which is seen as the main resistance to Iran, over the past few years.

“The fact that eight of the ten diplomats or agents of the Iranian regime expelled or jailed in Europe and the U.S. for terror plots over the past two years were tied to operations against our movement attests to the reality that the NCRI is the alternative and an existential threat to this regime,” Jafarzadeh said.

The resolution now has 221 co-sponsors from 41 different states. One of those, Rep. Brad Sherman of California, spoke at the Wednesday event and advocated for a “nonnuclear, democratic, secular, free, and prosperous Iran.”

“While the regime has continued to fuel extremism across the region, everyday Iranians have stood up to the regime,” Sherman, who is a member of the Foreign Affairs Committee, said. “They’ve done that at great risk to themselves and their families. Iranians have come out to the streets to protest the regime, and in return, the regime has cut off the internet and blamed foreign governments for attempting to sabotage the regime.”

“They are there screaming, ‘Enough is enough,’” he added.

Rajavi herself addressed the event. She expressed her wishes for an Iran free of both theocratic and dynastic rule.

“This Resolution, co-sponsored by a bipartisan majority of members of Congress, reflects the American people’s support for Iranian people’s desire for a free Iran, a republic based on people’s free vote, separation of religion and state, gender equality, respect for the rights of ethnic groups, and a non-nuclear Iran,” Rajavi said. “Our struggle is not for taking power, but to realize the Iranian people’s desires. The Iranian people have struggled against two dictatorships and for freedom. They overthrew the shah and will continue their struggle to overthrow the mullahs’ regime and achieve freedom.”

“Today, our nation, Iran, is at a critical moment in history. The regime’s regional strategy has hit a dead end. Corruption is widespread. The Iranian people realize that the suffering and poverty they face is because the mullahs have plundered our nation’s wealth,” she added.

Democratic Rep. Sheila Jackson Lee of Texas was also among the several lawmakers who made an appearance. She expressed support for Iranian dissidents and enmity toward Iranian aggression in other countries.

“We’re against a regime that promotes terrorism and terrorizes its people. We want you to know as you stand for freedom, you will have the support of so many of us,” she said, adding that the U.S. stands with those protesting the Iranian regime.

The same night that Iran sent the barrage of missiles into Iraq, it also accidentally shot down a Ukrainian airliner, killing scores of Iranian citizens. Iran initially lied about the incident before admitting it was at fault, sparking a new wave of protests against Khamenei and Iranian President Hassan Rouhani.

Republican Rep. Dan Crenshaw of Texas addressed the virtual gathering by saying, “Freedom and human rights matter. Your freedom, your human rights matter.” In his appearance, Crenshaw took a moment to bash the 2015 Iran nuclear deal before encouraging Iranians to protest.

“We recognize the brutality of the ayatollah and his regime, and instead of staying silent and hoping things get better, we proudly and openly stand with the brave Iranian people who are standing up and demanding to be recognized.”

Since the U.S. withdrew from the Iranian nuclear deal, Iran has been subject to a “maximum pressure” campaign that attempts to squeeze the regime into submission economically. Iran has faced international pressure, too. Last week, the United Nations said in a report to the Security Council that the missiles that hit Saudi oil facilities and an airport last year were “of Iranian origin.”

“Iran continues to expand its proliferation-sensitive nuclear activities in a transparent attempt to generate negotiating leverage and extort the international community. These provocations will not work,” a spokesperson with the State Department told the Washington Examiner at the time. “President Trump made clear we will continue imposing maximum pressure on the Iranian regime until it ceases its destabilizing activities and negotiates a comprehensive deal.