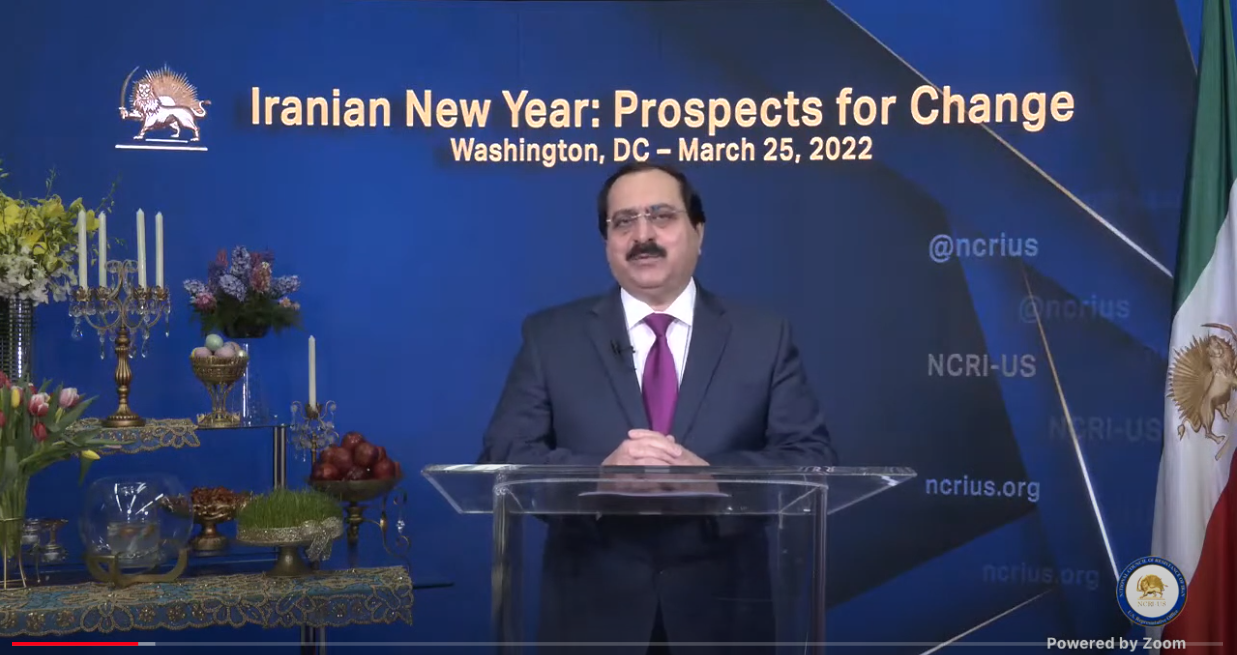 The NCRI-US conference held on March 25, 2022, coincided with the ancient Iranian new year, Nowruz. Mr. Alireza Jafarzadeh, the Deputy Director of the Washington office of the National Council of Resistance of Iran (NCRI-US), moderated the conference.

Transcript of the Opening Remarks by Mr. Alireza Jafarzadeh

Hello everyone, Happy Nowruz and thank you for joining us at the National Council of Resistance of Iran, U.S. Representative Office.

My name is Alireza Jafarzadeh, and I am the deputy director of the NCRI’s Washington office. We are delighted to host this event coinciding with the Iranian New Year, Nowruz.

That is why next to me, we have a traditional Haft Seen table, which symbolizes life, rebirth, health, strength, and sunrise. And that is what we are looking for, the sunrise of Freedom in the new Iranian Year. Let’s hope for it, and let’s work to make that happen.

Today, we intend to discuss the state of the Iranian regime, its weaknesses, and vulnerabilities, the state of protests, and the desire of the Iranian people for change. We will look at the behavior of the Iranian regime to include its nuclear weapons program, its missile and UAV program, its support for proxy terror groups, its role in supporting the invasion of Ukraine by siding with the unjust war there. And finally, what the U.S. policy should be in countering all of these problems, but also in helping the people of Iran to achieve freedom, the same way that the people of Ukraine are fighting for their freedom from occupation, invasion, and bombings.

Needless to say that U.S. Congress has played a significant role so far, and key Democratic and Republican voices are pushing for a firm and decisive policy regarding Iran and we are grateful for them.

We have seen Senators Bob Menendez, Ben Cardin, Jim Risch, and Ted Cruz expressing serious concerns about US policy on Iran. Equally, there are bi-partisan voices on the House side.

Video of the Opening Remarks by Mr. Alireza Jafarzadeh

Removing the IRGC from the list of foreign terrorist organizations is worse than not having placed the organization on the list, says former AG Michael Mukasey
Comment
Amb. Paula Dobriansky: Hope for a new day in Iran built on human rights, freedom, and democracy