MENUMENU
Articles > Removing the IRGC from the list of foreign terrorist organizations is worse than not having placed the organization on the list, says former AG Michael Mukasey

Removing the IRGC from the list of foreign terrorist organizations is worse than not having placed the organization on the list, says former AG Michael Mukasey 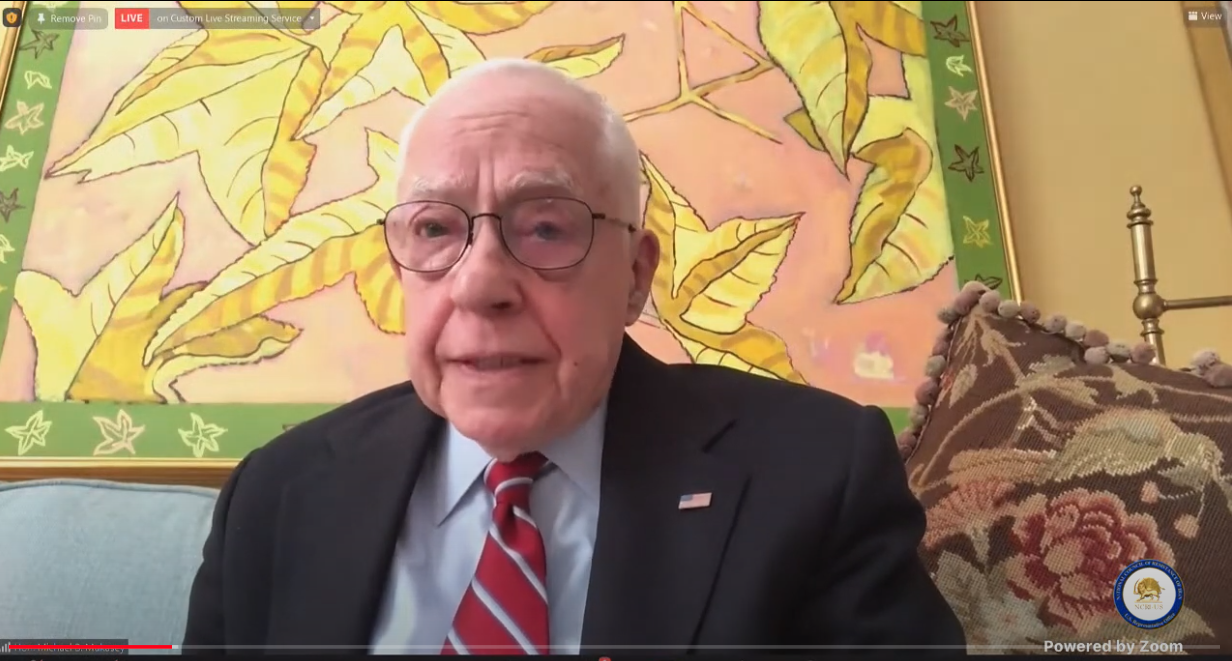 One of the conference speakers was Honorable Michael Mukasey, the 81st Attorney General of the United States

Thank you, Alireza. Thanks to all of those who are involved in this very important discussion, both those who are participating in it and those who are watching to see if we can find a reason for hope for the sunrise that Alireza mentioned in this introductory remarks.

Even as we are meeting here to discuss these matters, the dangers that the regime in Tehran poses in the world, and the way of overcoming those dangers, there are negotiators in Vienna who are having a discussion of a very different kind. According to news reports, they are considering a demand by the regime that the Iranian Revolutionary Guards Corps, the IRGC, be removed from the list of foreign terrorist organizations that is maintained by the United States. And that’s supposed to be part of the price for Iran entering into a resurrected version of the JCPOA, an agreement that is supposed to keep Iranian at least temporarily from completing the steps toward developing a nuclear weapon. And that price is said to include also a lifting of sanctions on the regime.

I submit to you that removing the IRGC from the list of foreign terrorist organizations would actually be even worse than not having placed the organization on the list in the first place. As a practical matter, being on the list exposes people and entities that deal with the IRGC to financial and even criminal penalties under U.S. law.

It’s hard to know where to begin in breaking down what’s wrong with this picture, so let’s take it one step at a time. As to whether the JCPOA can or should be revived at all, I offer simply the plain and documented fact that despite the regime’s claims that it seeks only a peaceful use for nuclear technology, the development of a nuclear weapon has been the goal of Iran’s program from the outset. Documentary evidence proving that was obtained in 2018 when Israel seized and shared with the world documents from an archive in Tehran that described Iran’s nuclear weapons program in detail. Those documents showed that Iran has been working on that program non-stop since 1979. And when I say nonstop, I mean even during the time when the JCPOA was supposedly in force.

And Iran, even under the new deal being discussed, so far as we know, would remain as one of the four countries designated by the United States as a state sponsor of terrorism, according to North Korea, Cuba, and Syria. Now there are two entities that Iran uses to conduct its terrorist activities. One is Hezbollah, the other is the IRGC. In fact, the IRGC has taken credit for a missile that hit a facility in Iraq just a few days ago and has been shown to have distributed explosive devices that were used to kill American soldiers in Iraq and elsewhere. And this is the entity that Iran is asking to be removed from the list of foreign terrorist organizations as part of the price of entering into an agreement that it is certain to cheat on, just as it did the earlier version of the agreement.

I submit to you that removing the IRGC from the list of foreign terrorist organizations would actually be even worse than not having placed the organization on the list in the first place. As a practical matter, being on the list exposes people and entities that deal with the IRGC to financial and even criminal penalties under U.S. law. But since it’s been difficult for the United States to actually lay hands on anyone who is dealing with the IRGC, that may not be much of an obstacle. But being on the list does make some entities, and some people, reluctant to deal openly with the IRGC. But think of the effect of taking the IRGC off the list. That would in effect be the United States saying that the IRGC, which is one of the two entities responsible for Iran’s status as a state sponsor of terrorism, that the IRGC is not itself a terrorist organization. The IRGC, in essence, will have been given the Good Housekeeping seal of approval by the U.S. government, such that no person or entity need have the slightest hesitation in providing resources or financing to the IRGC, banking services, or material to use in constructing weapons because the United States government has certified that it is not, or at least that it is no longer a foreign terrorist organization.

Nowruz is supposed to be, I recognize, a joyous time. But this year it’s fraught with danger. If the mullahs are not to be given a runway to a nuclear weapon, whether through violation of an agreement like the one it has already violated, or even through compliance for the brief period that restrictions will be in effect if that result is to be avoided, it will take bold action of the United States Congress and in particular by the United States Senate to assert its authority to review the agreement as a treaty and to vote it down. All we can do at this point is to wait and see what agreement comes out of Vienna if any, and whether the hope that we all have for Nowruz—the hope of the sunrise that Alireza alluded to, there will be no further empowerment of the mullahs, the terrorist label on the IRGC will remain in place—that those hopes are realized. I pray with all my heart that they are and that Nowruz brings us and the world to a better place. Thank you very much.

Distinguished Policy Figures Call for Maintaining the IRGC on the FTO List, No Sanctions Relief, and Highlight Prospects for Change in Iran
Comment
The state of the Iranian regime, its weaknesses and vulnerabilities, the state of protests and the desire of the Iranian people for change