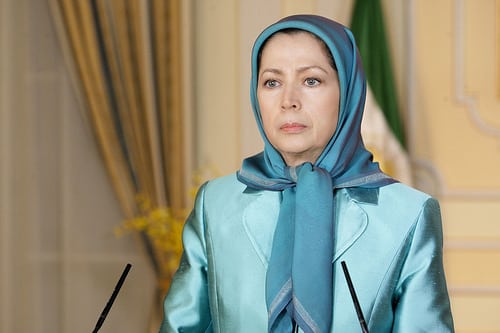 Maryam Rajavi: Impact of the retreat in nuclear program reflected in the disturbance of the ruling theocracy’s internal balance

The entire regime was the loser of the elections; as internal crises aggravate and the population’s rage escalates, the mullahs inch closer to their downfall

Following a farce, predicated on the “heart-felt and practical allegiance” to the velayat-e faqih (absolute clerical rule), and merely a choice between the regime’s repressive and corrupt factions that amounted to depriving the Iranian people of their sovereignty, the clerical regime claimed in a ridiculous and astronomical lie that more than 60 percent of the eligible voters (33 million according to official figures) had cast their ballots.

This was despite the fact that many impartial sources and eyewitnesses at thousands of polling stations reported and confirmed sparse crowds, as well as the apathy of, and boycott by, of the vast majority of the Iranians, especially the youth, not to mention made-for-television stage managing in Tehran and several other major cities, designed to give the appearance of a high turnout.

Earlier, the regime’s leaders, citing bogus polls, had announced that between 65 to 75 percent of the population will take part in the election. The machinery of vote fraud and rigging had been set to announce such an engineered outcome.

This was in addition to widespread rigging, intimidating or offering incentives to vulnerable sectors of society to compel them to cast ballots. The threats were being issued in administrative, military and labor centers, detailed in the NCRI’s statement no. 4. Threatening workers with “serious consequences” if they did not vote, buying votes and birth certificates, voting with birth certificates of the deceased, voting multiple times and transferring the regime’s operatives from one town to another to recast their ballots have been widely reported.

Maryam Rajavi said in this regard:  A glance at the list of candidates presented by the regime’s various factions leaves no doubt that the choice was merely between different factions responsible for suppression, execution, exporting terrorism, warmongering, and plundering the Iranian people’s wealth.

For example, she added, the list of candidates for the Assembly of Experts endorsed by Hassan Rouhani and Akbar Hashemi Rafsanjani included the current Intelligence Minister, his two predecessors, and Ali Razini, the criminal deputy head of the Judiciary and a Sharia judge, all of whom must face justice for committing crimes against humanity.

Maryam Rajavi added: Contrary to expectation by some in the West after the signing of the Joint Comprehensive Plan of Action (JCPOA) that the mullahs will pursue a path of moderation and reform, the regime’s Supreme Leader Ali Khamenei resorted to purging rivals in order to forestall the theocracy’s inevitable downfall and to further focus his regime’s resources on the war in Syria and the occupation of Iraq. Nevertheless, the implications of taking one step back from the regime’s nuclear projects were reflected in the election as it has now disturbed the regime’s internal balance. The momentum gained by Rafsanjani and Rouhani has weakened and undermined Khamenei’s hegemony.

The election result will not bring any serious change to the Iranian people’s political and economic livelihood and it will have no consequential winners within the clerical regime. The real loser is the ruling theocracy in its entirety. In view of the crisis raging at the apex of the ruling elite and considering the Iranian people’s ever-increasing anger and hatred, the regime has taken a qualitative leap toward being overthrown, Mrs. Rajavi emphasized.

The Silver Lining in Europe’s Ill-Advised Embrace of Hassan Rouhani
Comment
Did Things Change After Iran's Elections? Not Really. The Mullahs Are Still in Charge