One of the conference speakers was Gen. Chuck Wald. Gen. Wald was a former Deputy Commander of United States European Command.

Thank you, Alireza. And Happy New Year and Nowruz to the entire NCRI team and everybody associated with this call. I have to say that most of the cogent points from a diplomatic standpoint have been covered extremely well by the last three ambassador speakers, and it’s impressive. What I’d like to do is just spend a moment I think to put into maybe military context the significance of a JCPOA agreement in the terms and structure that we’re looking at today, and the significance of that agreement allowing Iran to still move toward becoming a nuclear nation.

I don’t think anybody in the world today that has a TV or a cell phone has missed what’s happening in Ukraine and the significance of that not only from the standpoint of Europe but from the global standpoint. One of my frustrations has been over the last several years, probably the biggest, I think the poorest definition of what we should do as a foreign policy for the United States is when we said we need to pivot towards China. I fully agree China is a threat and we need to focus on that. But when you say the word in English, pivot, it means you turn your back on something. And in that case, we turned our back on the Middle East to a certain extent. The Middle East is not going away from the standpoint of importance for a lot of reasons. And we need to stay focused on that.

I totally echo the concerns with the IRGC being taken off the terrorist list. There’s no way that should be allowed to happen. … [and] the ballistic missile development and testing by the Iranians is another step that is lost in the discussion many times but is a significant issue for the United States.

The issue in Ukraine that’s held the U.S. administration back primarily, I think, has been the threat by Putin that he would use nuclear weapons if forced into that corner. That is a significant issue for any country that has that type of weapon and leverage. My concern is that Iran would move towards the weapon if this agreement is made, that they would have the ability to use any nuclear weapon as total leverage in the Middle East. It would significantly inhibit us from using some of our capabilities in the Middle East to support our friends in the Middle East.

As was mentioned by the ambassador earlier, the Russians and Chinese are making inroads in the Middle East because of the belief by the leadership in both the UAE and Saudi Arabia primarily is that we’re departing from the Middle East in a big way. It’s lost its stature as an important part of our foreign policy and the issues that we concern ourselves within the United States. You’ve got Mohamed bin Zayed who is the crown prince of the United Arab Emirates is an extremely savvy and experienced leader in these types of issues, and he’s making it public that he’s having meetings with Russian and Chinese diplomats and others, government officials, to discuss how there could be a collaboration on various issues. That is an ominous issue for the United States.

So, I think the number one issue for me is the fact that the world would change significantly if Iran had a nuclear weapon, not just from an Israeli standpoint but in the rest of the Middle East. Number two, I totally echo the concerns with the IRGC being taken off the terrorist list. There’s no way that should be allowed to happen. They make the Russians look weak in a lot of ways from the standpoint of how their actions are in the Middle East and what they’ve done. And then lastly that kind of an unforgotten part of the whole issue that I think the JINSA Group and Jonathan Ruhe is on here, my colleague from JINSA can talk to this at length, but the ballistic missile development and testing by the Iranians is another step that is lost in the discussion many times but is a significant issue for the United States.

So, I would say Alireza, and for everybody on this call, the major thing we should be thinking of right now is how if Iran were to get a nuclear weapon it would change the dynamic in the Middle East, it would handcuff the United States from the standpoint of our participation there and our negotiations with other countries in the Middle East. It’s going to definitely change our stature with our allies. And the IRGC being taken off the terrorist list would be a huge mistake and actually immoral. So, Alireza and everybody here, Happy New Year. I’m sure at some point we can have this call from Tehran, but I’m looking forward to that. And in the meantime, Happy New Year to you all, thank you.

Amb. Mitchell Reiss: There should be no debate over removing the Foreign Terrorist Organization (FTO) designation for the IRGC 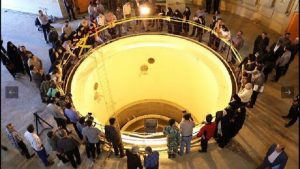 The Iran Nuclear Deal Must Sink in the Ashes of Ukraine

Must deal with Iran from a position of strength and maximum sanctions, states the Heritage Foundation fellow Steven Bucci
Comment
JINSA Director Jonathan Ruhe: In 2021, Iran and its proxies used 750 projectiles in attacks around the Middle East