The Honorable Michael B. Mukasey’s Remarks re Raisi Complaint 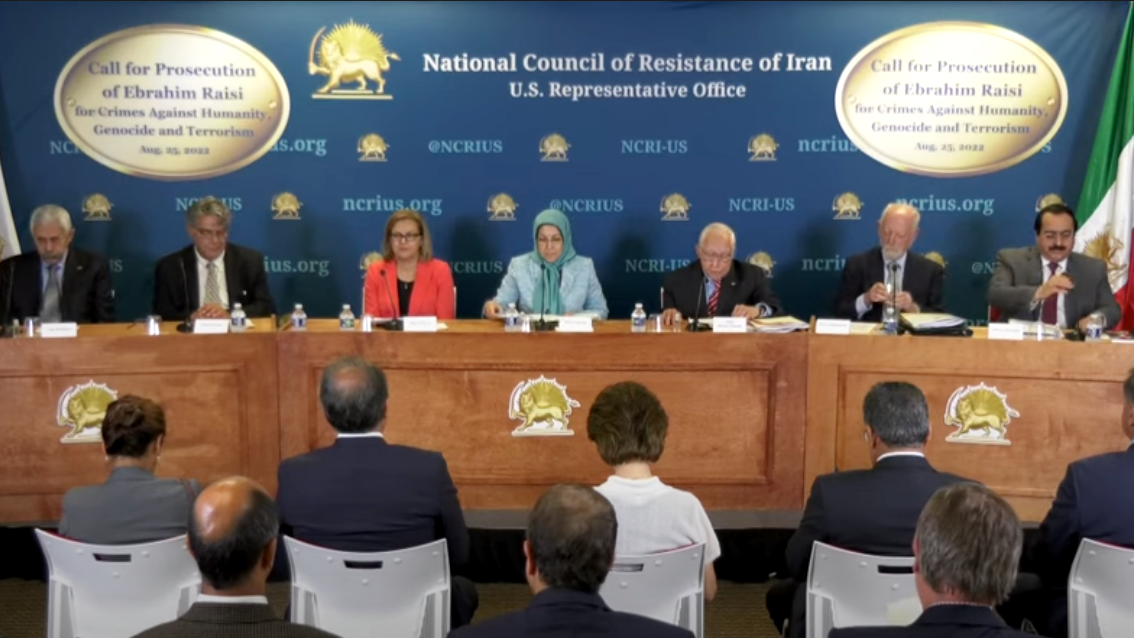 A year ago – in August of 2021 – we had occasion to mark, if not exactly to celebrate – the accession of Ibrahim Raisi to the presidency of Iran, as the hand-picked candidate of the supreme leader, Ali Khamenei.

Raisi at the time was already generally acknowledged by observers inside and outside the United States as a stone-cold murderer.  The head of Amnesty International issued a statement when his selection was announced in June 2021 expressing her consternation that such a person could be chosen for such an office instead of being investigated for crimes against humanity.  In 2019, the US Treasury Department’s Office of Foreign Assets Control, known as OFAC, imposed sanctions on him based on his participation in what has become known as a death commission, ordering the execution of thousands of political prisoners – including thousands of members of MEK, in 1988, and in 2021 the State Department imposed immigration restrictions on him based on a finding that he was a senior Iranian official involved in the commission of serious human rights abuses.

Today, we have occasion to mark yet another landmark of sorts in the long career of Ibrahim Raisi – the filing of a complaint by some of the victims and relatives of the victims of the campaign of torture and execution carried out in Iran in 1988.

The course that this case will take will be influenced by several aspects of the setting in which it has been filed.

One, of course, is the legal setting.

It is anticipated that if Raisi comes to the United States, as he has said he will in September to attend the UN General Assembly, in the ordinary course and absent other considerations that I will get to, he would be subject to the jurisdiction of United States courts, and could be served with the complaint in this case, which presents claims under two federal laws – the torture victim protection act and the alien tort statute.

These laws are similar in that they allow for the filing of civil rather than criminal claims in u-s courts – claims that allow plaintiffs to affix civil liability on individuals who act in an official capacity, for any foreign nation, to commit torture or extrajudicial killing of victims of any nationality, including victims who are of the same nationality as the perpetrators.

Raisi here has been sued as an individual, but the acts he committed were committed in his official capacity as someone exercising powers given him by the government of Iran – indeed, powers he exercised in carrying out a 1988 fatwa by the ayatollah Khomeini himself.

Although these acts were committed abroad, in the exercise of official powers, there should be little doubt that such acts come within the reach of the statutes cited in this complaint.  It is Congress that has explicitly granted to federal courts in the United States the jurisdiction to hear such actions and to grant the civil relief they provide for.

In 1988, Raisi was deputy prosecutor general of Tehran province, whose activities were focused in two prisons in Tehran – Evin and Gohardasht.

As to whether he committed the acts alleged in this complaint there can be no doubt.  In a famous meeting in 1988, a recording of which was released in 2016, Ayatollah Hossein Ali Montazeri, the designated successor of Ayatollah Khomeini, is heard addressing members of the death commissions, including Raisi, and telling them that they are guilty of the greatest crime committed in the Islamic Republic, for which history will hold them accountable.  Raisi was one of four death commission members to whom Montazeri addressed a letter making the same point – that letter describes the killings ordered by these death commission members, including Raisi who was an addressee on the letter, as “massacres without trial.”

And Raisi has not denied his participation, and in 2018 was quoted as saying that the murders committed at the direction of the death commissions were “one of the proud achievements of the system.”

Because of the way these death commissions functioned, it is no strain to characterize the executions they ordered as extrajudicial.  That word means simply outside any recognizable judicial proceeding, and the death commissions functioned by simply bringing prisoners before them, and asking one question.  In the instances involving members of MEK that one question was whether they in fact adhered to the MEK.  The accused were permitted to speak only to answer that one question.  If the answer was yes, they were taken out immediately and hanged, sometimes in groups of as many as 12.

By no stretch of the imagination was that a judicial proceeding; indeed, the letter from Ayatollah Montazeri in 1988 that I quoted a moment ago, addressed to Raisi and three others, refers to these killings as “massacres without trial.”  He said, “I am worried about the judgment that posterity and history will pass upon us.”

To be sure, there are some legal challenges to overcome.  If Raisi claims diplomatic status and asserts diplomatic immunity from being sued.  The United States is party to the 1961 Vienna Convention on diplomatic relations.  Because the United States is a party to it, that convention is a treaty and has the force of law in this country.  It protects individuals serving as diplomats from being sued here, with certain exceptions that may not apply.  However, it should be stressed that it is far from clear that Raisi is eligible for the status of a diplomat.  The convention itself defines a diplomat as the head of a diplomatic mission or a member of the mission.  Raisi is certainly not the head of Iran’s mission to the UN, and so far as we know is not designated as a member of the mission.  Also, the special treaty-based immunity of representatives of UN Member States from civil suits is limited to acts done by them in their capacity as representatives.  That is not what we have here.

That is a brief description of the legal landscape, which can be further addressed by the talented lawyers who are handling this case, and who are present here.

For one thing, Raisi has the title of president but one could argue, and I think more convincingly, that the Supreme Leader, Ali Khamenei, is the head of state.  Indeed, President Obama said of the Iranian president he was dealing with that he did not have ultimate authority, and that that authority belonged to the Supreme Leader alone.  The issue of head of state status is important because as I will explain in a moment there are political and perhaps legal considerations underlying the question of whether a head of state can be sued in the courts of another state.

The Department of State has authority to decide whether, despite the fact that Ali Khamenei is the Supreme Leader, Raisi nonetheless should be regarded as head of state, and if it makes that determination and so notifies the court, that determination is binding on the court.

What will influence the department of state in making that determination?

For one thing, the reality is that Ali Khamenei is the Supreme Leader and has been so regarded throughout the world for years.  Indeed, even within Iran, Ali Khamenei is the one who decided that Raisi had the right to run for president, and that one of his predecessors, Ahmadinejad, did not think he should properly be regarded as the head of state.  A state should not have two heads any more than a human being should have two heads.

We all know that the current administration and the Secretary of State appear eager to conclude an executive agreement with Iran relating to its nuclear program.  This is not the time or place for me to explore the wisdom or unwisdom of entering into such an agreement, although I would note that in 2018 Israel carried out a daring raid in which it seized an archive of Iranian documents proving that Iran has pursued the goal of obtaining nuclear weapons non-stop since Khomeini came to power in 1979, even during periods when it was supposedly bound by agreements not to do so.  Rather, my point is that it may be that the State Department would not wish to offend Iran by agreeing that Raisi is subject to being sued while here attending the UN General Assembly.

If the State Department is called on to express a view to the court, I would suggest that there are at least three elements that I would suggest should enter into its calculation beyond the question of whether its decision would please or displease a country with which it is seeking to conclude an agreement.

One, of course, is something I mentioned a few moments ago – that the State Department itself found in 2021 that Raisi was involved in the commission of serious human rights abuses, some of which are the subject of this lawsuit.

Another is the fact that the government of which Raisi serves as president, although again I believe he is not head of state, is itself one of only four governments that the US has designated as state sponsors of terrorism.

But a third element the State Department should consider is that according to a complaint filed by the Justice Department, it was in October 2021 – two months after Raisi took office – that the Iranian government solicited  people to murder former national security advisor John Bolton, and former Secretary of State mike Pompeo, and perhaps a third official, apparently in retaliation for the attack in January 2020 that killed Qassem Soleimani, former head of Iran’s IRGC, an agency designated as a terrorist organization by the United States. That murder was to be carried out on U.S. soil.

Based on the structure of the Iranian government, that plot likely would have had the approval of Raisi as Chair of the Supreme National Security Council, one of two bodies involved with authorizing foreign terrorist operations, the other being the Special Affairs Office of the Supreme Leader Ali Khamenei.   According to documents filed in a 1982 trial in Berlin, known as the Mykonos trial, relating to an assassination carried out by the Iranians, the president of Iran serves on the Special Affairs Committee of the Special Affairs Office.  It would seem at least politically problematic to extend head of state status to someone likely to have been involved in planning the murder of U.S. officials on U.S. soil.

There is a third setting here that is relevant, and it is one you will hear about when the people who have suffered at the hands of Raisi get an opportunity to address you. And that setting is one that is supposed to underlie both the legal setting and the political setting.  That is a moral setting.  Apart from other considerations, there is a basic instinct in civilized societies that says that people credibly accused of doing what Raisi stands accused of should at least have a record made of their deeds, and ideally be made to confront and respond to that record.  It is important to build that record in as many jurisdictions as possible so that the full picture of who Raisi is can emerge.

Whether the effort to build that record, in this case, is ultimately successful or not, it is important to try.

Federal Complaint Against Ebrahim Raisi for Role in the 1988 Massacre
Comment
Ebrahim Raisi Is a Mass Murderer, Deny Him U.S. Visa, Hold Him Accountable for Crimes Against Humanity and Genocide