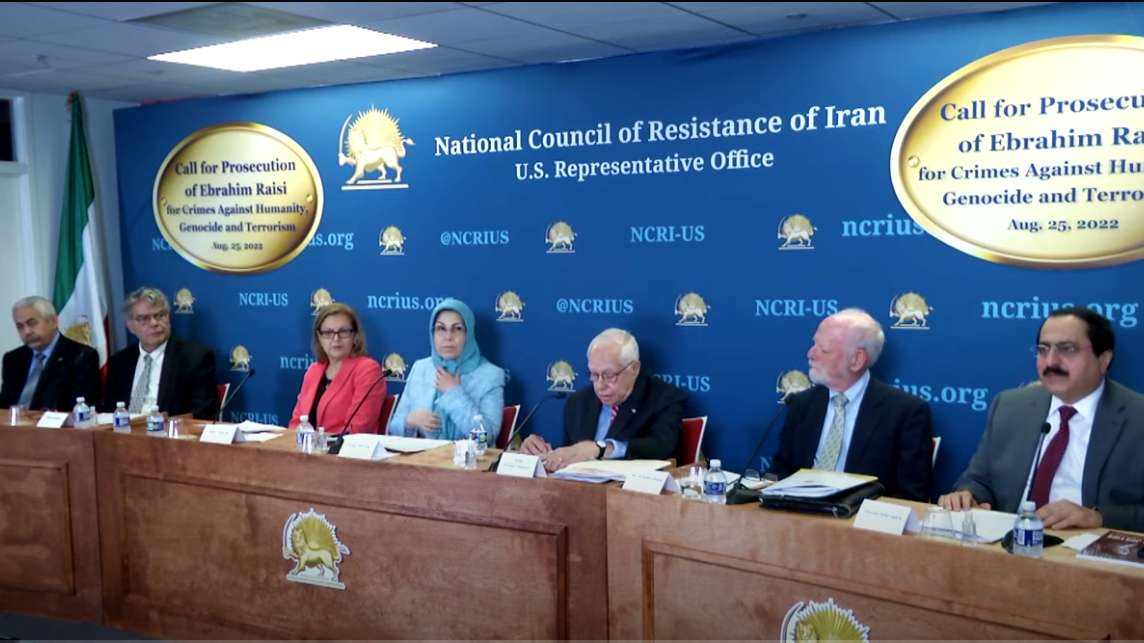 A legal complaint was filed in southern district court of New York, against Raisi, the Iranian regime’s president for crimes against humanity and genocide.

WASHINGTON DC, August 26, 2022 — On Thursday, August 25, 2022, the National Council of Resistance of Iran – U.S. Representative Office (NCRI-US), held a press conference presenting details of the complaint filed in a federal court in Manhattan against Ebrahim Raisi, president of the Iranian regime, just weeks before his announced plan to travel to New York to attend the United Nations General Assembly. The statutory basis of the complaint and the charges against Raisi, were presented.

The 81st U.S. Attorney General Michael Mukasey attended the conference as well as Steven Schneebaum, one of the lawyers representing the plaintiffs. Also, in attendance were Ms. Soona Samsami, U.S. Representative, National Council of Resistance of Iran, Mr. Alireza Jafarzadeh, Deputy Director, Washington Office of the National Council of Resistance of Iran, Ms. Sheila Neinavaie, a former political prisoner in Iran, Mr. Ahmad Hassani, who lost a family member in 1988 massacre and one of the plaintiffs, and Mr. Amir Borjkhani who spent 9 years in Iranian regime’s prisons who appeared before the death commission attended by Ebrahim Raisi.

The complaint’s plaintiffs are individual political prisoners who survived the 1988 massacre of political prisoners in Iran, and the families whose loved ones were murdered. A fatwa (a religious edict) issued by Ruhollah Khomeini, in the summer of 1988, resulted in some 30,000 political prisoners, more than 90% of whom were members and supporters of the People’s Mojahedin Organization of Iran (MEK), being hanged, and others tortured. “Death Commissions,” established by the clerical regime across the country to carry out the fatwa, decided which prisoners would live and which would be killed, after interrogations lasting a few minutes.

Mr. Jafarzadeh opened the conference explaining the significance of this legal action, “Last week, initiated and facilitated by the National Council of Resistance of Iran, a legal complaint was filed in the United States district court for the southern district of New York, under the Alien Tort Statute and the Torture Victim Protection Act against Ebrahim Raisi, the Iranian regime’s president for crimes against humanity and genocide.”

Jafarzadeh said this federal complaint is a very significant undertaking, “because it is the first time that a court is building record and investigating” the crimes carried out by Raisi. He said, “it is stunning that a mass murderer, who has been involved in torture, massacre, and killing over four decades, has never been held accountable anywhere in the world. Instead, he wants to visit a western country, the headquarters of the United Nations in order to legitimize his unmatched murderous record. His attempted U.S. visit has been righteously rejected by many Members of U.S. Congress in both chambers.”

Remarks by Soona Samsami, Representative in the United States, The National Council of Resistance of Iran

Ms. Samsami gave an account of crimes committed by Raisi, “The death commissions, which were established by the clerical regime carried out the fatwa against the defenseless prisoners. Ebrahim Raisi, at the time the deputy prosecutor, was a member of the Death Commission in Tehran and was therefore personally responsible for sending thousands of MEK prisoners to the gallows in Tehran and the city of Karaj, west of the capital,” adding that “his crimes are not something of the past.”

She added, “his record since assuming the presidency last year once again proves his criminality; 582 executions, including 22 women and eight juvenile offenders in one year, which is double the number of executions of the previous year.” Judge Mukasey discussed Raisi’s role in the massacre, “Raisi at the time was already generally acknowledged by observers inside and outside the United States as a stone-cold murderer,” adding, “in 2019, the US Treasury Department’s Office of Foreign Assets Control, known as OFAC, imposed sanctions on him based on his participation in what has become known as a death commission, ordering the execution of thousands of political prisoners – including thousands of members of MEK, in 1988, and in 2021 the State Department imposed immigration restrictions on him based on a finding that he was a senior Iranian official involved in the commission of serious human rights abuses.”

Remarks by Honorable Michael b. Mukasey, 81st Attorney General of the United States

Judge Mukasey then discussed the legal grounds for the complaint. “It is anticipated that if Raisi comes to the United States,” he would be “subject to the jurisdiction of the United States courts, and could be served with the complaint in this case, which presents claims under two federal laws – the Torture Victim Protection Act and the Alien Tort Statute,” Mukasey said.

Mr. Schneebaum presented the history of crimes committed and the legal argument for the complaint. “The plaintiffs, in this case, are survivors of the massacre and family members of some of the men and women who were murdered. They are now citizens of the United States, Canada, the United Kingdom, Germany, and Switzerland. They have harrowing stories to tell, and this lawsuit will allow them to tell those stories in a court of law.”

Explaining that this is “a civil case, initiated by the victims against the perpetrator of unjustifiable acts,” Mr. Schneebaum added, “The plaintiffs allege that Raisi was personally responsible for committing a number of offenses under international law, and that he is therefore personally liable to his victims and their survivors. These include torture, extrajudicial killings, crimes against humanity, and genocide.”

Ms. Sheila Neinavaie who is one of the survivors of the 1988 massacre recounted her observations. “I was arrested three times and spent a total of 8 years in various Iranian prisons. I was first arrested in November 1981, by the Iranian regime security forces when I was barely 15 years old at my home in Tehran, and taken to the notorious Evin prison, simply for distributing the literature of the main Iranian opposition movement, the MEK.”

She described her experience with Raisi, “on August 15, 1988, I was taken to the ‘death corridor’, and appeared before the death commission in Evin, where I sat in a single chair in front of the 4-member committee, one of which was the current president of the regime, Ebrahim Raisi,” adding, “I was among the very few survivors. After months of returning to my solitary confinement, I realized that most of the people I knew in the prison had been hanged, and the prison which was full when I entered it, seemed deserted and empty.”

Ms. Neinavaie concluded, “For this reason, I chose to join the legal complaint as a witness and victim of Raisi’s crimes against humanity and genocide. Now is the time for justice and accountability.”

Mr. Hassani detailed the case of his brother who was killed in summer of 1988, “My brother Mahmoud which was born in Iran in 1960 was a student in Tehran University when he was arrested in 1981, at the age of 21, and was sentenced to 10 years in prison for expressing support for the main Iranian opposition group, the Mujahedin-e Khalq (MEK).”

“While in prison, he was tortured and abused physically and mentally,” said Mr. Hassani of his brother, “We were shocked to find out that he had been hanged during the 1988 massacre, like 30,000 others, after refusing to renounce his support for the MEK and the ideal of Iran’s freedom before the death commission.”

Hassani said, “Raisi is directly and personally responsible for the execution of my brother because he was a member of the death commission in Tehran, which ordered the execution of political prisoners in Evin Prison and Gohardasht Prison in Karaj, west of the capital.”

Calling for justice, Hassani said, “I join the tens of thousands of families of the victims and those who survived the massacre to demand accountability. The United Nations must launch an investigation. Raisi, and the regime’s Supreme Leader Khamenei must be prosecuted for crimes against humanity.”