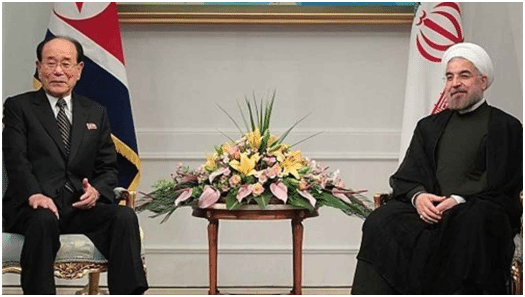 For years, the conventional wisdom has been that Iran and North Korea have long cooperated in missile technology, giving the perception of not so dangerous of an alliance. That was until last week. In yet another groundbreaking revelation, Iran’s main opposition movement, the Mujahedin-e Khalq (MEK) provided information that Iran and North Korea have been engaged in extensive exchange of information and visits by experts on nuclear weapons and nuclear warhead design, as recently as April 2015.

The MEK, based on information obtained by its network inside Iran, provided a detailed account of a visit to North Korea in 2013 by Tehran’s top nuclear weapons experts headed by elusive Mohsen Fakhrizadeh, who was present during the last nuclear test conducted by North Korea.

A seven-member North Korean delegation, comprised of experts in nuclear warhead design and various parts of ballistic missiles including guidance systems, spent the last week of April in Iran. This was the third such nuclear and missile team to visit Iran in 2015. The next delegation is scheduled to secretly arrive in Iran in June and will be comprised of nine experts, according to the same MEK sources.

That Tehran continues to closely engage with North Korea, a country that cheated its way into making a nuclear weapon, all the while pledging that it would not do so, should be an additional cause for alarm. It should be a red flag for the P5+1 countries as they continue their negotiations with Iran in Vienna and Geneva with only days left before the June 30 deadline to sign an agreement.

The Iran-North Korea nuclear cooperation is in sharp contrast to what the Iranian regime leaders are telling the world. It also explains why the Supreme Leader Ali Khamenei rejects IAEA inspections of military sites, snap inspection of all sites, and interviews with nuclear scientists.

Tehran has so far managed to largely push its missile program out of the nuclear agreement requirements, and with it its extensive nuclear cooperation with North Korea—something that was kept under the radar for years.

The North Korean nuclear experts who traveled to Iran in April stayed in a secret guesthouse, a cordoned-off eight-story building, near a Hemmat Industrial Group site in the Khojir area, northeast of Tehran. Named “Imam Khomeini Complex,” and also known as 2000 units, the site is controlled by the Ministry of Defense (MoD).

The Korean delegation’s needs were met by Center for Research and Design of New Aerospace Technology, one of seven sections of the Organization of Defensive Innovation and Research (SPND). Dr. Aref Bali Lashak, who personally dealt with the Korean delegation, heads this section.

The North Korean delegation dealt with this section of SPND whose responsibility is electronics area of research and manufacturing interior parts of nuclear warhead. The visit’s arrangements were made by the Directorate of Coordination of the Iranian Ministry of Defense (MoD), headed by Brigadier General Nassorllah Ezati and the Directorate of Inspections of the MoD headed by IRGC Brigadier General Alireza Tamizi.

While there were earlier reports about Fakhrizadeh’s presence during the North Korean’s 2013 nuclear test, a two-year investigation by the Iranian opposition shows that Fakhrizadeh had gone to North Korea for the nuclear test through China under the alias  “Dr. Hassan Mohseni.”

Fakhrizadeh, the head of SPND and the key figure in activities concerning the military dimensions of the regime’s nuclear program, is a Brigadier General of the IRGC, with whom the IAEA has repeatedly requested interviews, but to no avail.

The MEK first exposed the formation of SPND in July 2011 and the State Department placed it on its sanctions list in August 2014.

According to the Iranian opposition reports, during the North Korean visit, Fakhrizadeh, accompanied by two other SPND nuclear experts, stayed in Hotel Koryo in Pyongyang and spent only two hours at the Iranian regime’s embassy. To keep his visit a secret, Mansour Chavoshi, Tehran’s Ambassador to Pyongyang, personally welcomed Fakhrizadeh and facilitated his communications and exchanges with North Korean officials.

The stunning detailed information provided by the MEK is further indication that the drive to acquire nuclear weapons remains at the core of the Iranian regime’s program as nuclear negotiations continue.

North Korea’s nefarious connection once again proves that after three decades of concealment and deception, adding six or nine months to the nuclear breakout time as a result of the P5+1 negotiations will not lead to a lasting solution. Washington needs to rethink its strategy in dealing with the Iranian regime; a strategy that would eliminate, not delay, the regime’s ability to build the bomb, because Tehran consistently shows that it must not be trusted. Any nuclear agreement with Tehran, which would leave open a pathway to the nuclear bomb, must be rejected. To that end, Congress might have its biggest role to play.