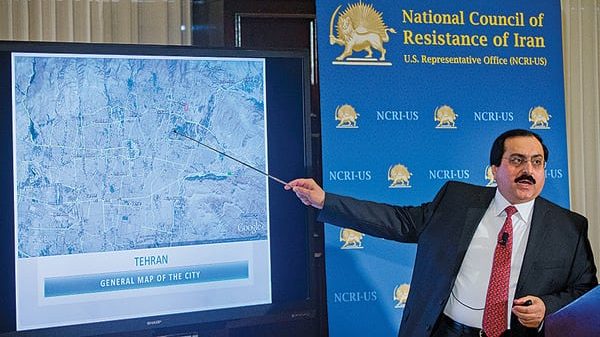 Statement by the U.S. Representative Office of the National Council of Resistance of Iran

Washington, DC, Feb. 27, 2015 – Subsequent to the Iranian Resistance’s revelations about the Lavizan-3 site, which the religious fascism ruling Iran had hidden for years, panic and fear have set in among the leaders of the regime, who are extremely worried about the implications of the disclosure of the new nuclear site.

Instead of inviting International Atomic Energy Agency (IAEA) inspectors to visit the location, the regime sidestepped simple questions about Lavizan-3 – the nature of the site and the activities there – and unleashed a barrage of insults, fallacies, red herrings, and lies.

When all such gesturing proved ineffective, the clerical regime fell back on another tactic, thrusting its agents to the scene to claim that the door, the picture of which was displayed during Tuesday’s press conference, was an image grabs from the website of a safe manufacturer company called GMP. On February 26, the regime’s official news agency IRNA quoted a state-affiliated website as saying, “It was claimed that the picture shows an explosive-proof vault door related to the site. … The picture was taken by a fire-proof door manufacturer GMP and is available on its website.” The carbon copy of this story was then disseminated through a large number of other state-affiliated media outlets.

However, the multi-year investigations of the MEK and the NCRI’s Security and Anti-terrorism and Defense and Strategic Research committees are comprehensive and detailed enough that the regime cannot sweep the scandal under the carpet by resorting to such lies.

The NCRI-US would like to make public the following additional points with respect to GMP, as well as the picture based on information obtained by MEK sources inside Iran:

While the regime wants to portray GMP as a private safe manufacturer, it is in fact a state-affiliated enterprise disguised as a private company. It specializes in manufacturing heavy explosive-proof, radiation-resistant doors, and bullet-proof vaults, winning customers exclusively from the regime’s military institutions, defense ministry, intelligence ministry, the Atomic Energy Organization of Iran, and the National Iranian Oil Company.

The company manufactures doors to protect weapons depots operated by state organs such as the Intelligence Ministry. Some of the doors are small enough to allow people to go through while some are large enough to allow vehicle passage. Last year, the company produced explosive-proof doors for Pars Garma in Gachsaran, which is affiliated with the defense ministry. Pars Garma was previously exposed by the Iranian Resistance and is involved in digging a number of tunnels for the IRGC Space and Aviation Organization (which produces missiles) as well as the regime’s nuclear installations.

In 2004, Kalaye Electric Company ordered four doors from GMP. Kalaye Electric’s go between with GMP was an individual named Shahbazian, an acquaintance of Farrokh Esfandiari, the Director General of GMP. At the time, the cost of building each door was about $30,000, with a construction time of roughly three months. Their dimensions were 3m x 3m, with a thickness of 40 cm, each weighing 8 tons. The doors are made from two thick metal with shielding layers including lead in the middle designed to block radiation. The doors are custom built and information about them is classified. The client vets the quality of the parts, with some parts imported from abroad.

Three documents showing the company’s communications with the Defense Ministry have been obtained by the Iranian Resistance. One of those documents outlines specifications and calculations concerning radiation-proof doors. A part of the document regarding radiation-proof doors has been posted on the company website. In a catalogue on radiation-proof doors, which have been installed at Lavizan-3, GMP notes that the doors are used for “nuclear facilities” and have “military applications for nuclear and laser systems.” On its website, however, the section on “military applications for nuclear and laser systems” has been removed.

The catalogue specifies, “This product ranks among products that may potentially be used in the nuclear energy program and remains under sanctions. External procurement is impractical and importing them is not financially feasible due to the high overall costs – roughly four times the cost of production by this company, which yields the same quality of product.” Clearly, GMP is well aware of the applications of these doors in nuclear installations.

USA Today wrote in its Friday edition that GMP posted a picture of the doors installed at Lavizan-3 on its website on February 12, 2015. The Iranian Resistance, however, had obtained a number of such pictures long before. The original of the picture displayed during the press conference on February 24 shows the same door as well as an extensive portion of the GMP workshop, which is different from the picture posted on the company’s website and could not have been a downloaded copy. The two pictures, one posted on the website and the other, the original of the picture displayed at the press conference, have been enclosed.

The NCRI-US repeats its calls to the IAEA and P5+1, especially the U.S. government, to enable UN inspectors to immediately visit the site before the Iranian regime can destroy evidence of wrongdoing as it did with regards to the Lavizan-Shian location. Otherwise, continuing negotiations with this regime and any form of agreement with it would amount to accepting its deceptive tactics while leaving the door open for the acquisition of a nuclear weapon by the godfather and banker of international terrorism.

U.S. Representative Office of the National Council of Resistance of Iran