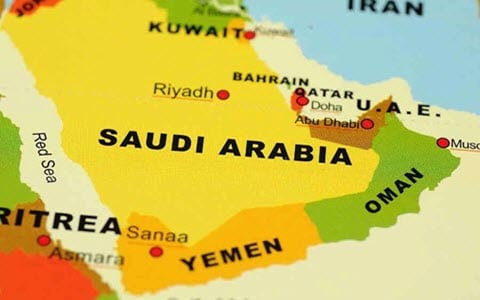 NCRI – The Saudi-led coalition that is fighting in Yemen closed off all of the land, sea and air ports on Monday after a ballistic missile fired by the Houthi rebels targeted Riyadh’s international airport.

The Saudis warned that this missile attack, which they believe was set up by the Iranian Regime, could be “considered as an act of war”.

The statement read: “Iran’s role and its direct command of its Houthi proxy in this matter constitutes a clear act of aggression that targets neighbouring countries, and threatens peace and security in the region and globally. Therefore, the coalition’s command considers this a blatant act of military aggression by the Iranian regime, and could rise to be considered as an act of war against the kingdom of Saudi Arabia.”

This latest move has increased tensions between Saudi Arabia and the Iranian Regime who are fighting on opposite sides in the Yemen conflict.

In response to the missile attack, which Saudi Arabia said it shot down, the Saudi-led coalition began air strikes on the rebel-held capital, Sanaa, and threatened Iranian regime with the possibility of a retaliatory strike.

The statement read: “The coalition command also affirms that the kingdom reserves its right to respond to Iran in the appropriate time and manner.”

The Iranian Regime, who openly back the Houthis, have denied arming them and the Houthis have claimed their Volcano-variant ballistic missile is locally produced. However, there is evidence that Iran built weapons factories to help its proxy groups in Lebanon and Syria, so why not in Yemen too?

Iranian defence minister, Amir Hatami, said: “Does anyone ask the United States what are you giving to Saudi Arabia?”

The answer to this is that Iranian regime asks this a lot in order to deflect attention, Saudi Arabia isn’t a terrorist cell but a nation-state, and the US provides the Saudi-led coalition with logistical and targeting support.

Donald Trump supported the Saudi belief that Iran was responsible for the attack. In a statement on Sunday, he said: “A shot was just taken by Iran, in my opinion, at Saudi Arabia. And our system (the Patriot missile batteries) knocked it down.”

The head of Iran’s Revolutionary Guards (IRGC) Mohammad Ali Jafari, said that Saudi Arabia and Trump were lying but many are unwilling to take the word of someone whose group has been sanctioned for terrorism.

The port closure will be temporary and will take into account the much-needed work of humanitarian and aid organizations in a war between the Iran-backed Houthis and the internationally recognized government, which is backed by the Saudi-led military coalition, which has cost 10,000 lives and driven Yemen to the brink of famine.