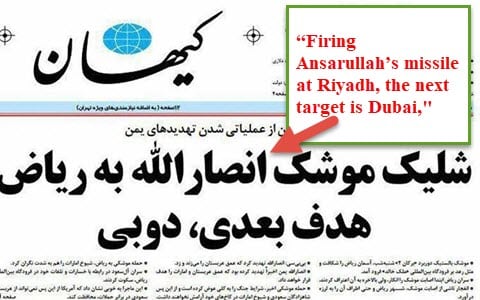 NCRI – Two days after Iran’s state-owned Kayhan newspaper (affiliated to Khamenei) wrote a threatening editorial titled “Firing Ansarullah’s missile at Riyadh, the next target is Dubai,” the political office of pro-Iran regime Houthis echoed the threat and threatened in a statement on Tuesday November 7 that “All airports, ports, border crossings and important areas of Saudi Arabia and the United Arab Emirates will be the direct target of our weapons.”

The statement emphasized that Saudi Arabia and the UAE “must be sure that our weapons are capable of targeting them.”

Saudi Arabia closed its airspace, and sea and land borders with Yemen on Monday, November 6, and called the missile attack on Riyadh during the weekend an act of war and warned the Iranian regime.

Prince Mohammad bin Salman, the crown prince, also the vice chairman of the Council of Ministers and the Saudi Minister of Defense, described equipping the Houthi militias with ballistic missiles as Iran’s “direct military aggression” against Saudi Arabia.

According to the official Saudi news agency (SPA), the Crown Prince of Saudi Arabia, in a telephone conversation with British Foreign Secretary, Boris Johnson, on Tuesday, November 7, said: “The involvement of the Iranian regime in equipping its affiliated militias [in Yemen] with the ballistic missiles is a direct military aggression by the regime and may be considered as a declaration of war against the Saudi Arabian kingdom.”

Earlier, Saudi Foreign Minister Adel al-Jubeir wrote on his Twitter account that Saudi Arabia would not allow any aggression and attack on its own security.

“Iran’s interference damages the security of neighbouring countries and threatens global peace and security,” he added.

Saudi Arabia and the United Arab Emirates are in a coalition that is trying to restore the legitimate government of Yemen to power since 2015.

It is worth recalling that the state-owned Kayhan daily affiliated with the regime leader, Ali Khamenei, threatened on November 5th that Dubai was the next target of the Houthi missile and wrote: “The emirates also realized that their turn has come and they must pay the price of their aggression and attack on Yemen from now on.”

“…From now on, not only Saudi Arabia but also Dubai and Abu Dhabi, even if not targeted, will not be safe areas for Western investors, as in the past.”

“…… Maybe Riyadh, Jeddah, Taif and Aramco will be the next target, or maybe Ansarallah turn the head of their missiles towards the shiny, clean harbour of Dubai.”

Following this smoke and fog chaffy threat, the regime’s secretary of press oversight issued a reminder to the Kayhan newspaper on the headline “Firing Ansarullah missile on Riyadh, the next target is Dubai,” and described it as “contrary to the interest and national security” of the regime.

Also, Mohammad Ali Jafari, chief commander of the Revolutionary Guards (IRGC), commented on November 5 about the Houthi missile attack from Yemen to Khalid International Airport in Saudi Arabia, and said that it is not feasible for us to carry missiles from Iran to Yemen, and “these rockets, which are fired, belong to Yemen itself”.

At the same time, Brigadier General Amir Hattami, Minister of Defense in Hassan Rouhani’s government, said: “The United States is not supposed to accuse Iran for any incident that occurs in the region!”