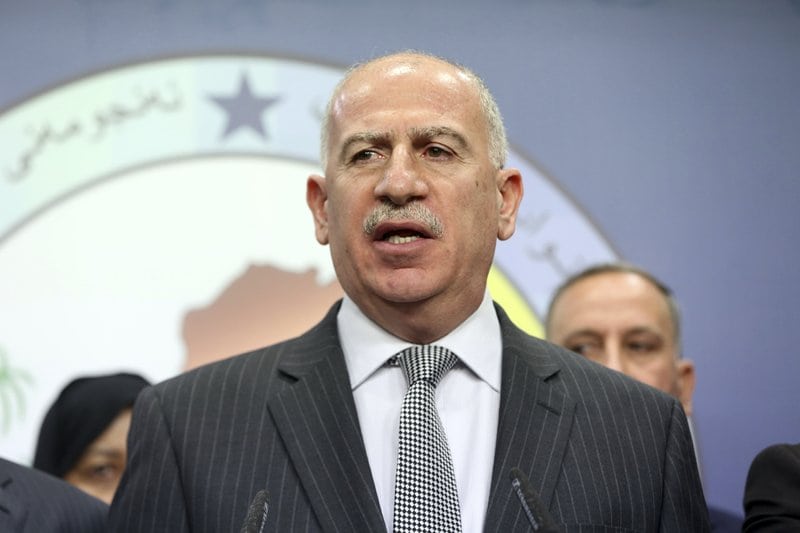 In Washington for talks this week with Trump administration officials and congressional leaders, Iraqi Vice President Osama al-Nujaifi is hoping the administration will deliver on pledges to counter Iran’s growing influence inside Iraq and across the Middle East.

Al-Nujaifi is one of Iraq’s three vice presidents, and his brother heads a prominent Iraqi defense faction. Both have been represented in Washington by the same lobbyist employed last year by Michael Flynn, President Donald Trump’s first national security adviser. In February, Trump fired Flynn, who is now under investigation by special counsel Robert Mueller.

In remarks Tuesday at the U.S. Institute of Peace, al-Nujaifi described Shiite militias in Iraq operating as a “parallel army” that could divide the nation even as Iraq’s military is driving out IS fighters with the aid of American troops.

The Iranian-backed factions “have gained a lot of power and maybe they can pose more problems,” al-Nujaifi said.

In an interview with The Associated Press and in an earlier draft of his remarks, al-Nujaifi was more explicit about his interest in securing military aid for Iraqi Sunni factions overmatched by Iran’s equipping and training of Shiite militias.

“More attention should be paid to the strengthening of military capabilities of the people of former ISIS-occupied areas, training and enabling them to defend their areas,” his speech says, according to a draft provided to the AP. He was referring to mostly Sunni areas recently liberated from IS fighters.

“I presume his pleas will be met with collective eye-rolling,” said Michael Knights, a Mideast analyst at the Washington Institute for Near East Policy.

On Tuesday, Al-Nujaifi made the case for disarming the Shiite militias. In a nod to Iraq’s 2018 national election and his likely role in it, he said a new coalition party knitting together Sunni, Shiite, Kurdish and Christian factions would stand the best chance of acting as a bulwark against the militias. Iraq’s current government is already a coalition, though often wracked with political turmoil.

In his interview with AP, al-Nujaifi recalled American military aid and training for Sunni tribal militias that fought against al-Qaida in Iraq a decade ago, saying Sunni forces again “need the ground support of the United States.”

Two years of lobbying in Washington didn’t win much support for al-Nujaifi’s brother, Atheel. After fleeing Mosul when IS captured the city in 2014, Atheel al-Nujaifi turned to Turkey’s government for training and other aid for his Sunni militia.

In October of last year, Kelley registered Flynn Intel Group with Congress for its lobbying on behalf of a Turkish-owned company, Inovo BV. But in March, Flynn’s firm abruptly filed instead as a foreign agent with the Justice Department, acknowledging that its work likely aided Turkey’s government. That filing is now under scrutiny as part of Mueller’s probe.