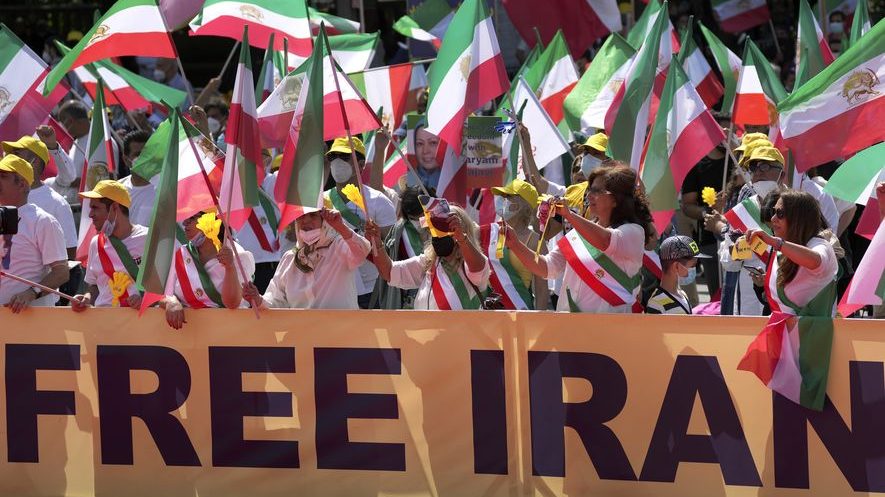 Secretary of State Mike Pompeo and a parade of former officials and current lawmakers from countries around the world told a mass virtual gathering of Iranian exiles over the weekend that the regime in Tehran was weak, illegitimate, incompetent and not long for this world.

They seem to have struck a nerve.

Iran‘s Foreign Ministry reacted angrily Sunday on the second day of the three-day “Free Iran World Summit 2021,” which attracted anti-regime activists from more than 100 locations around the globe hosted by the umbrella group the National Council of Resistance of Iran (NCRI).

Mr. Jansa was one of the few government officials currently in power to directly address the three-day gathering, but the summit heard from a broad bipartisan array of lawmakers on Capitol Hill, as well as such prominent figures as former Canadian Prime Minister Stephen Harper and former Italian Foreign Minister Franco Frattini.

It was Mr. Pompeo‘s extensive attack on the Tehran regime Saturday which attracted perhaps the most media attention.

Iran‘s theocratic government is at “its weakest point in its now 40 years of existence,” Mr. Pompeo told the summit, arguing that now is the time for the U.S. and its allies to step up pressure on hardline President-elect Ebrahim Raisi as he prepared to take office.

Mr. Pompeo was a chief architect of the Trump administration’s tough line with Tehran, which included repudiating the 2015 Iran nuclear deal negotiated by the Obama administration and reimposing harsh economic sanctions on the regime and its trading partners. He said Mr. Trump’s approach was beginning to bear fruit, even if “its application for under two years was insufficient to fully achieve its end goals.”

He cited what he called Tehran‘s bungling of the COVID-19 crisis, a foreign policy that has left Iran a “pariah” in the Middle East, and economic policies that have led to food shortages and sharp increases in the price of basic consumer goods.

“In short, Iran is not working, and the Iranian people know it,” Mr. Pompeo said.

The former secretary of state — and potential contender for the 2024 Republican presidential nomination — also dismissed any notions that President-elect Raisi represents any change for the regime, even as the Biden administration moves to strike a deal for the U.S. to rejoin the 2015 nuclear deal.

The current head of the Iranian judiciary who was elected from a field in which most prominent moderates were banned from running, Mr. Raisi “was chosen by the Ayatollah because he is just about 60 years old and thus could lead for the next two to three decades,” Mr. Pompeo said.

Although hardliners in Iran opposed the original nuclear deal, Mr. Pompeo predicted the Supreme Leader and the new president will happily accept the benefits if the U.S. rejoins in the coming weeks.

Speaker after speaker on Sunday echoed the same lines of attack: that Iran‘s recent low-turnout elections were illegitimate and a sign of crumbling popular support; that Mr. Raisi’s brutal past — human rights groups have called for an investigation into his leading role in the executive of thousands of political prisoners during the bloody eight-year Iran-Iraq War of the 1980s — renders him unfit to serve; and that a 10-point peace plan put forward by NCRI leader Maryam Rajavi is the only realistic path to a free, democratic Iran.

The plan includes an end to the mullah-led Islamic Republic, political freedoms, an independent judiciary and gender equality, a rejection of nuclear weapons, and more economic opportunity and respect for workers’ rights.