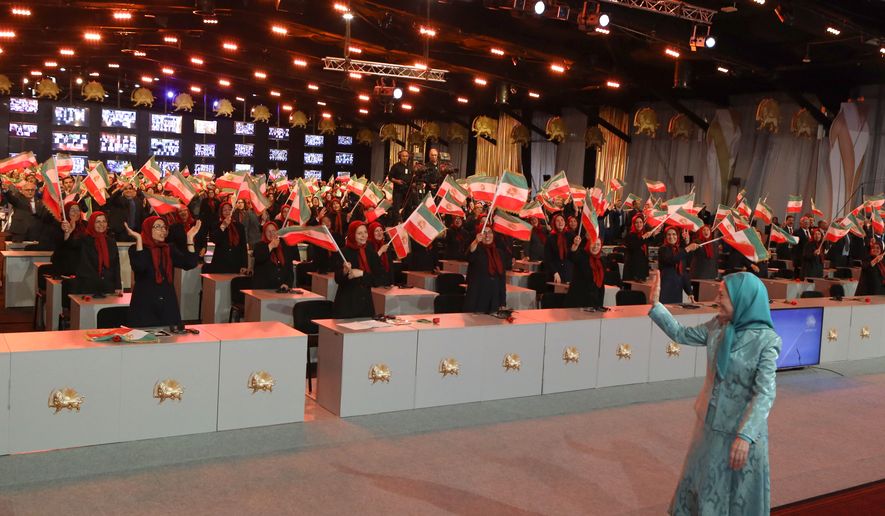 The world’s largest Iranian dissident organization is set to activate its annual global summit Friday, overcoming the social distancing COVID-19 era with a virtual event that aims to link potentially millions of supporters at 30,000 locations in more than 100 countries to calls for Iran’s theocratic dictatorship to be replaced by a democracy.

Organizers say they hope the a show of online force, which is being orchestrated by the National Council of Resistance of Iran (NCRI) and its associate group the People’s Mujahedeen of Iran (MEK), will shake the regime of Iran’s supreme leader, Ayatollah Ali Khamenei.

“It sends a message to the clerical regime that, despite all its attempts to physically eliminate the Iranian resistance coupled with its extensive and well-funded demonization campaign, today the resistance is stronger, more cohesive and more determined than ever before to overthrow the regime in its entirety,” acting NCRI President Maryam Rajavi told The Washington Times.

The council has adjusted to COVID-19’s devastating contagion not by canceling the summit but by capitalizing on the technology of multiple commercial viewing platforms. Conferencing app Zoom will host in each of 30,000 locations. People can also take in the conference on video channel YouTube, social media Facebook, Twitter and Instagram, and HD TV livestreaming.

“Anyone can join from everywhere,” Ali Safavi, a member of the council’s foreign affairs committee, told The Times. “Our friends have pulled off a humongous engineering feat.”

Liftoff for the Free Iran Global Summit is set for 9:30 a.m. EDT on Friday. Several major Western cities will host viewing gatherings on HD TVs, including one slated at the U.S. Capitol in Washington, another at Brandenburg Gate in Berlin and another in Paris.

“This is a tremendously significant and large assembling, the largest internet event ever organized,” Mr. Safavi said.

NCRI organizers say resistance members who operate in the shadows to avoid the Iranian regime’s net of internal security will be skirting internet firewalls inside Iran to participate.

Mrs. Rajavi told The Times that the summit will send “a message to the Iranian people that the [MEK] and the resistance, particularly the resistance units inside Iran, are standing with them and are supporting their uprising to overthrow the theocracy and to win ultimate victory while standing shoulder to shoulder with each other.”

The NCRI maintains that Iran’s government is worried about the MEK’s growing strength among young people, who staged weeks of protests last year in cities across the Islamic republic.

In May, the state-run website Erja News urged regime officials to acknowledge the MEK’s reach.

With that as a backdrop, organizers of the conference say they hope to exploit the regime’s worries by airing a video that will underscore the MEK’s recent accomplishments inside Iran by multiple resistance cells.

“The most significant message of the annual gathering is that regime change in Iran is imminent because the democratic alternative is ready and capable of achieving it,” the NCRI said in a summit policy statement.

The council maintains that Tehran’s fear of the MEK and the wider resistance movement has been on display internationally in recent years.

In a related development Wednesday, authorities in Antwerp, Belgium, arraigned four Iranians, including a diplomat, on criminal charges of conspiring in 2018 to bomb the council’s annual summit in Paris that more than 100,000 people attended.

Police have spent two years gathering evidence for court. Authorities said the four Iranians will remain jailed while their cases play out.

The NCRI said in a statement that it “provided information to the investigation making it palpably clear that the decision for this terrorist bombing was made by regime’s Supreme National Security Council and approved by the Supreme Leader Ali Khamenei.”

Mrs. Rajavi told The Times that she believes the 2018 bombing attempt explicitly targeted her and many senior European and American dignitaries.

“If the plot were not discovered and thwarted at the last minute, it would have led to the largest and deadliest terrorist act on European soil,” she said. “Of course, terrorism has been part of the regime’s survival strategy and its most important foreign policy instrument since Day One.”

A succession of U.S. presidents designated Iran as the world’s largest state sponsor of terrorism.

The virtual summit is being held while Iran is tested internally. The Trump administration pulled the United States out of the 2015 nuclear deal with the Islamic republic and has ramped up a campaign of sanctions against Tehran as well as a global embargo on Iranian crude oil.

With the regime and economy struggling in the face of such pressure, 2019 was a year of uprisings inside Iran. Young Iranians took to the streets to protest a lack of jobs and a lack of freedom. U.S. officials say Iranian security forces responded with a wave of brutality. The State Department said the regime killed at least 1,500 protesters, including women and children.

“The uprising that peaked in November 2019 has neither been suppressed nor has it vanished,” said Mrs. Rajavi. “The root causes that contributed to the outbreak of those protests are not only still in place, but they have been intensified and strengthened.”

In addition to pressure from Washington, the regime has struggled to manage the impact of the COVID-19 pandemic in Iran.

The Islamic republic’s official case and death count compares favorably with other countries. The regime reports 13,200 dead and 262,000 cases in a population of 81 million. That puts its per capita mortality rate well below those of the U.S. and Britain.

However, the MEK says the mullahs are hiding the true count of about 70,000 deaths. “The real scope of coronavirus in Iran is catastrophic. Some 70,000 Iranians have perished. And in fear of public backlash, the clerical regime from the onset has resorted to a massive campaign to conceal the real scope of the crisis,” the resistance council says.

Mr. Trump dumped the Obama administration’s 3-year-old nuclear deal in May 2018 and imposed a new round of economic sanctions that administration officials say are aimed at forcing Iran to end all hopes of an atomic arsenal.

“The regime is in a much weaker and more vulnerable position compared to last year,” Mrs. Rajavi told The Times. “It is much more exposed, and the society writ large is on the verge of a real explosion. So the regime is closer to being overthrown more than ever before.”

Mr. Trump dealt his swiftest blow on Jan. 3 when a drone-fired missile killed Maj. Gen. Qassem Soleimani as he and an Iran-backed Iraqi militia leader drove from Baghdad International Airport. Soleimani led the notorious Quds Force, the mullahs’ most lethal arm for carrying out mayhem in neighboring counties.

Trump aides said Soleimani was in Iraq to plan strikes on American troops.

“I think they miss Qassem Soleimani,” Marine Corps Gen. Kenneth F. McKenzie Jr., commander of U.S. Central Command, said on July 8. “I think over a period of decades, he reached a unique position in Iranian planning, in Iranian execution and in Iranian leadership. And the fact that he is gone, they have not been able to fill his role.

“I’m not certain they’re ever going to fill the role that he played,” Gen. McKenzie told reporters. “I think it still has an effect on them and they’re not as coordinated as they once were, and there’s a number of things they don’t do as well as they once used to do. And I don’t know that anyone’s going to come along to replace him.”

Mr. Trump is lobbying the United Nations to extend an arms embargo that would limit Iran’s ability to reinforce various surrogate fighters in Yemen, Iraq, Syria and Lebanon.